Hope all you mothers out there had a great Mother’s Day! Meanwhile, Monday has arrived – but at least Monday means music! This week is a freebie week, so feel free to grab your favorite tune(s) and come dance with us, won’t you?

Let’s start with this country artist’s brand new single which also happens to be the title track of his newly-announced fifth studio album. The song finds the country hitmaker stuck in the aftermath of a breakup, unable to move on from the heartache that followed. He tries his best to, but the sometimes-haunting power of music sends him right back to the past.

When he walks into a bar, he hears Bruce Springsteen’s “Dancing in the Dark” — a trip to the grocery store and Bonnie Raitt’s “I Can’t Make You Love Me” comes on. Later, even after mustering the courage to go on a date, the singer hears Van Morrison’s “Brown Eyed Girl,” and it makes him regret breaking up with his old flame.

“There are songs that just transport you back in time to a moment with someone you love. Even though you’ve not been with the person for a long time, these songs take ahold of you. You might be having a fine day, then you walk into a store where the song is playing, and you’re transported into the past.” Give a listen to Brett Eldredge with “Songs About You”:

Next up, if you ask this artist who had the biggest impact on his life, he’d point to his godmother, Leigh. Because of that, he’s dedicating his music video to her, because she inspired the song. He was quoted as saying:

“‘{This song]’ is about Leigh, my Godmother. She was my mom’s best friend. She super showed up for me after my mom’s passing.”

The artist was only 25 when he lost his mother to breast cancer in 2009. His godmother said that the artist in turn, saved her:

“Our loss was so tremendous. [She] was such a big, huge part of both our lives.”

The singer told Leigh he not only wanted her to appear in the music video, he hoped to inspire his fan base to also shout out the individuals who changed their lives for the better – in 10 words or less, which he incorporated into the music video.

“Whether a teacher, a parent, a stranger, or a friend — I want to know who impacted your life in a positive way.” Get ready for some goosebumps, here’s Andy Grammer and R3HAB with “Saved My Life”:

Next up, this artist co-wrote and co-produced this song with her Chromatica producer,  penned for Top Gun: Maverick, the sequel to the 1986 blockbuster movie in which Tom Cruise reprises his role as Captain Pete “Maverick” Mitchell. The cinematic power ballad marks this artist’s return to writing and producing original music for a motion picture following 2018’s A Star is Born.

The song finds the singer comforting someone who is hurting. She tells them to take her hand and let it all out as she holds onto them. She assures them things will get better and God will answer their prayers. The artist worked on the song for years before completing the track. She said:

“I wanted to make music into a song where we share our deep need to both be understood and try to understand each other. A longing to be close when we feel so far away and an ability to celebrate life’s heroes.”

The lyrics took on a greater resonance after the trials and tribulations of the COVID-19 pandemic era. The artist described the song as a “love letter to the world during and after a very hard time.”

The music video finds the artist performing the song on a dusty air-force runway and in an airplane hangar. She dons the original aviation bomber jacket that Tom Cruise wore as Maverick in the 1986 movie, and also wears similar aviator shades. Top Gun: Maverick filmmaker Joe Kosinski directed the visual, which also features clips from the movie and pulls imagery from the 1986 Top Gun in nostalgic flashback form. Here’s the inimitable Lady Gaga with “Hold My Hand”:

Last, but certainly not least, since yesterday was Mother’s Day, I wanted to include a song in honor of that special day. This new song from this artist is a poignant tribute to mamas – with the help of her mother, along with Lady A’s Hillary Scott and her three daughters. She said:

“It’s a love letter to all our mamas and an anthem for the people who love them wholly. No matter what kind of mama you are, y’all are doing the Lord’s work!

We wanted this song to capture the hearts of so many different people. Whether it’s a song for you about your mom, or because you’re a mom, or maybe it’s your grandmother that raised you or a different mother figure in your life.”

The singer/songwriter knows the healing power of music firsthand. The lyrics of Hillsong Worship’s “What A Beautiful Name” became a lifeline for the Lexington, Kentucky, native after her brother was tragically killed in a car accident at the age of 23. Although she spent much of her childhood behind a piano, she sang in front of an audience for the first time at her brother’s funeral. It was at that moment that she realized what she was born to do. 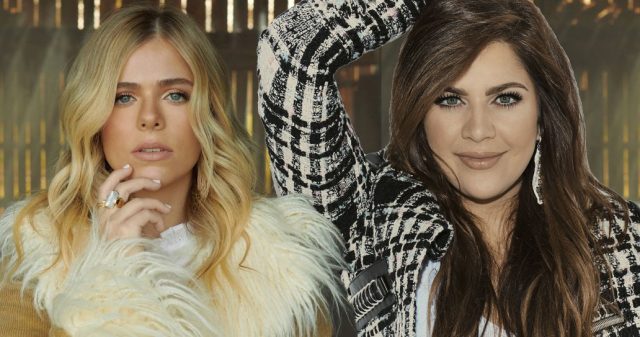 5 thoughts on “Songs About You Saved My Life, so just Hold My Hand and celebrate all the Mamas!”