Happy Monday! March has arrived – looks like it’s coming in like a lamb here in the Pacific Northwest.

For the month of March, our Spotlight Dancer is our friend and the Brainchild and leader of the fabulous Monday’s Music Moves Me – our very own Marie from Xmas Dolly! The theme selected for this week is “Build a playlist of your favorite Johnny Mathis songs.”

I’m not going to lie, I’m not a big Johnny Mathis fan (sorry, Marie!) – mostly because he was before my time, and I’m – in general – not a fan of music or artists before my time, if that makes sense. But there is one song that was indoctrinated into more ‘modern’ movies and shows, so it’s one I recognize and do enjoy.

Songs like this one are the reason why Johnny Mathis became known as a ballad singer and the era’s reigning king of make-out music.

This was Mathis’ first #1 hit single and was included on his compilation Johnny’s Greatest Hits, which is regarded as the original Greatest Hits album. He was just two years into his recording career at the time, but Columbia Records was pressuring him for a new release, so his producer came up with the idea for a hits package. He was quoted as saying:

“That was Mitch Miller’s idea. That was the first time I had a chance to go out of the country and go to Great Britain. They wanted me to go in the studio and make some more recordings. I had had some success with ‘It’s Not for Me to Say,’ and I wasn’t able to record anything new, so he threw the first four recordings that I did – both sides on them – and called them Johnny’s Greatest Hits. That was a little flamboyant, because it was not the greatest hits, yet. But that was a great beginning for a lot of people. Even Mozart has a Greatest Hits now. Good idea from Mitch Miller.”

The album spent a whopping 490 weeks on the Billboard chart and held the record for the longest run until it was surpassed by Pink Floyd’s Dark Side Of The Moon at 491 weeks in 1983. (Dark Side eventually notched more than 880 weeks total.)

In the 1982 movie Diner, set in 1959, Eddie (Steve Guttenberg), Shrevie (Daniel Stern), and Modell (Paul Reiser) get into an argument when one of them compares Mathis to Frank Sinatra. It finally comes down to Modell asking, “Who do you make-out to? Sinatra or Mathis?” Eddie begrudgingly replies, “Mathis.”

This received the Grammy Hall of Fame Award in 1998. 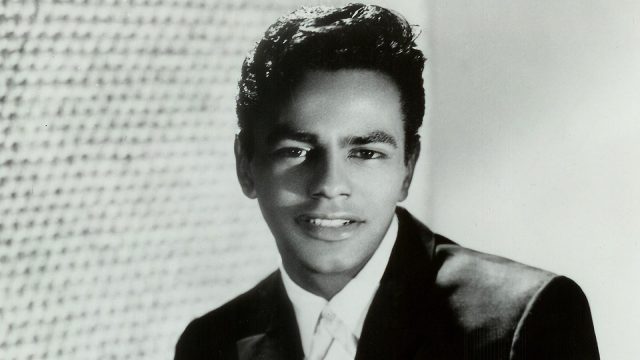 With my singular entry for this week’s theme, here’s Johnny Mathis with “Chances Are”:

7 thoughts on “Chances Are…”