We’re still holding strong on no rain here in the Seattle area. It looked like it was thinking about raining late yesterday, but no such luck. We went camping over the weekend in spite of the burn ban – campfires are overrated, right? Well, OK, maybe not, but we decided that even if we couldn’t enjoy some s’mores, we’d still have fun.

And we did. Camping in the mountains on a river is always fun. Our campsite had a direct path to the river, with a little grotto area sectioned off in front of the rushing waters – all the kids enjoyed the grotto, and some of the kids and us adults braved the rapids and cooled off in the refreshingly cold mountain waters.

It was an unusual sight to see Princess Nagger without her electronics for a weekend, the river certainly had her attention though – she spent a good amount of time down on the rocks gazing out over the rushing water. It was fun to see. I captured her on the way to one of her gazing sessions: 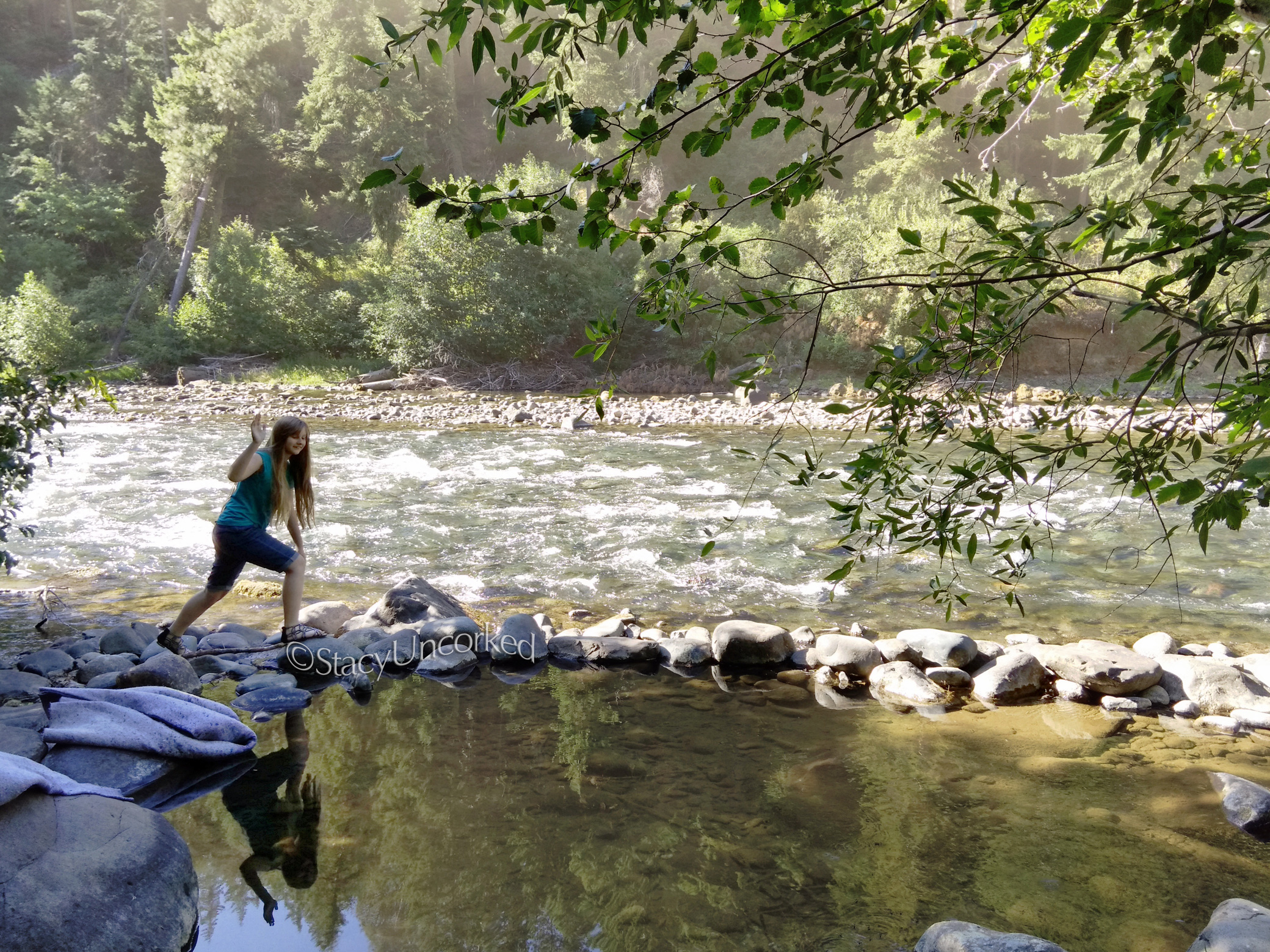 When a bunch of us were swimming in the rapids later in the day, Little Dude was having a great time perched on a giant rock just under the surface of the grotto playing with minnows, crayfish and water striders. He’s such a lightweight I was worried if he joined us in the fast moving waters he’d get swept away, and nobody wanted that to happen, not even him.

He had a lot of fun throwing rocks to watch them splash. I may or may not have helped with some rock throwing fun, I’ll never tell. I loved that he got into ‘Hulk’ mode when he was throwing the rocks: 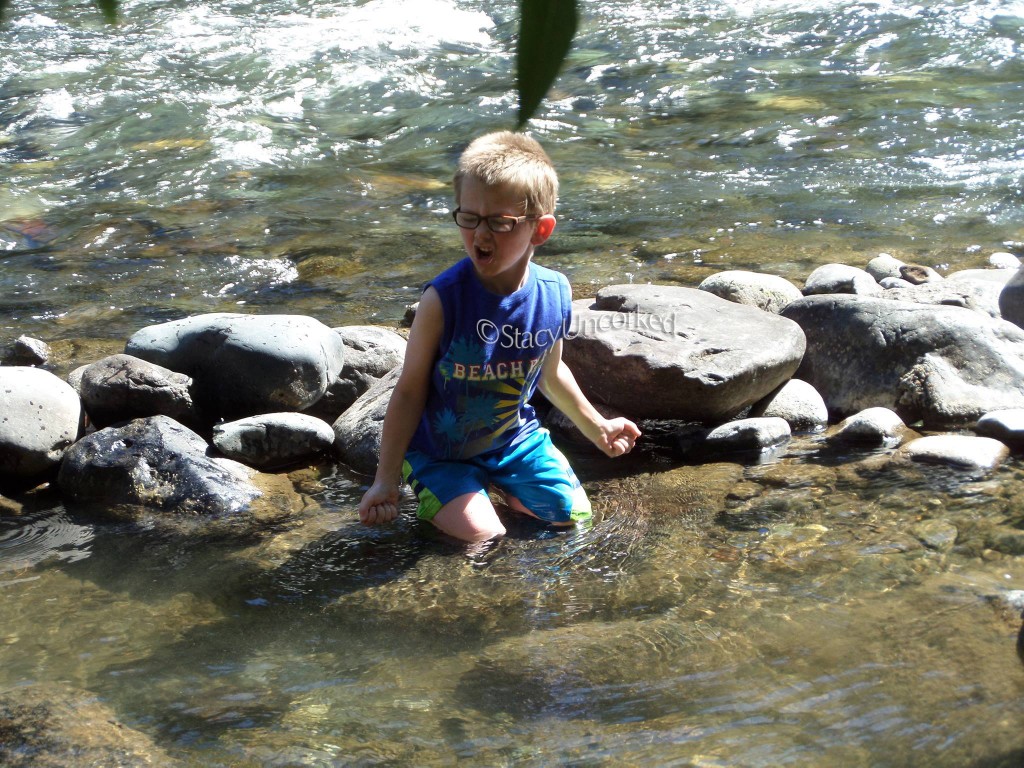 I’m sorting through all the hundreds of pictures taken over the weekend and will share those tomorrow. Meanwhile I have to hunt down getting a different tent, because the one I bought last month in anticipation of this camping trip (and our upcoming ones) was a failure.

The idea of an “insta-tent” is great – in spite of the fact they pack bulkier than a ‘regular’ tent, and they’re heavier to pack and move around, but the idea of having them set up in 3 minutes or less was the selling point. That, and this particular tent has three separate ‘rooms’, so we could divide and conquer:

Pretty cool, no? It has three separate 8’x8′ rooms in the tent – nice and spacious, and tall enough so the hubby wasn’t having to duck when inside the tent. But the three-minute set-up turned into a couple hours of frustration when one of the roof rods wouldn’t stay ‘clicked’ in extended mode, causing the roof to sag inward.

If only we had duct tape with us, we could have jury rigged it to stay upright. But at least it was just one of the three rooms, and since Little Dude is the shortest of us all (and he had called dibs on that section), we decided just to stake it firmly with guy lines and hope for the best – after all, it was only for 2 nights.

But being that it’s defective, it’s definitely going back. And I think I’m going to go back to the ‘manual’ version of a tent – one of the things that took forever was we couldn’t tell where the front and doors were, and had to shift the tent around when it was partially set up to get it to fit in the spot. At least with a tent you have to feed the poles into, you can lay the tent out flat and know in advance where the doors and windows are.

Plus they’re lighter weight, and since the hubby will be having cataract surgery prior to our next camping trip and won’t be able to lift anything, the heavy lifting will be up to me – so I’m thinking a lighter weight is much better for me to wrangle.

In other news… we’ve started the process of subjecting Princess Nagger to braces. She hates me for it, but she’ll thank me later. Her biggest fear is that she’s going to be in excruciating pain for the duration, and like me, she’s ‘allergic’ to pain. Hence the face, waiting for the mold fun: 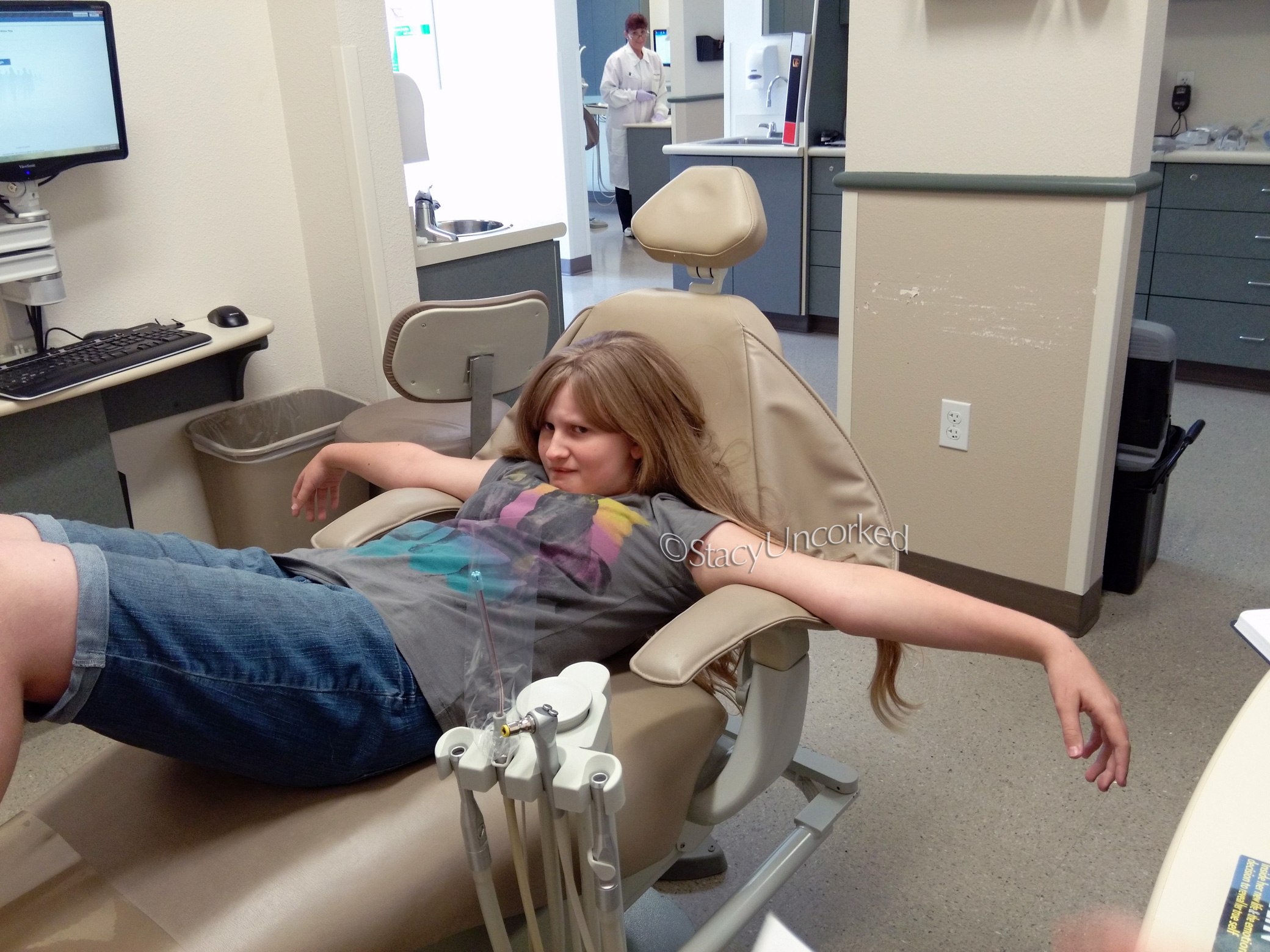 Just think of all the fun you’ll have watching the progress…heh.

7 thoughts on “Mountain Camping Fun with a Defective Tent and Princess Nagger’s Getting Braces: RTT Rebel”