Everyone has already been flooding the Facebook feed with images of their little munchkins on with their first day of school glamour shots. My kids start school two weeks from today, so obviously there are no ‘first day’ pictures. Yet.

They’ll be the stragglers in a couple weeks, hopefully enough time for people to no longer be annoyed by the first day shots. It’s worth a shot, no?

So the hubby’s first cataract surgery went swimmingly last week, aside from us camping at the ocean over the weekend and him being in the salt air (which, I imagine, only aided in the slight irritation he has in that eye at the moment).

The irritation aside, his vision in that eye is now stellar, and he’s been like a kid marveling at what he finally can see (from one eye), and how amazing the world really is. He goes in for round 2 tomorrow, so his marveling will be twice as emphatic, I’m sure.

Speaking of camping… I did take the other tent back and picked up a new one – a non-insta one that I could set up by myself if necessary, though I did recruit Princess Nagger’s help since the hubby is on doctors orders to ‘take it easy’, not lift more than 25 pounds, and not bend over to do stuff (since it could cause pressure behind his eyeball). It’s a nice roomy tent, and worked out perfectly, so third time ended up being the charm.

The first night it was a bit rainy (mostly drizzle and fog in the early hours of the morning), so that contributed to some cool haze in the morning: 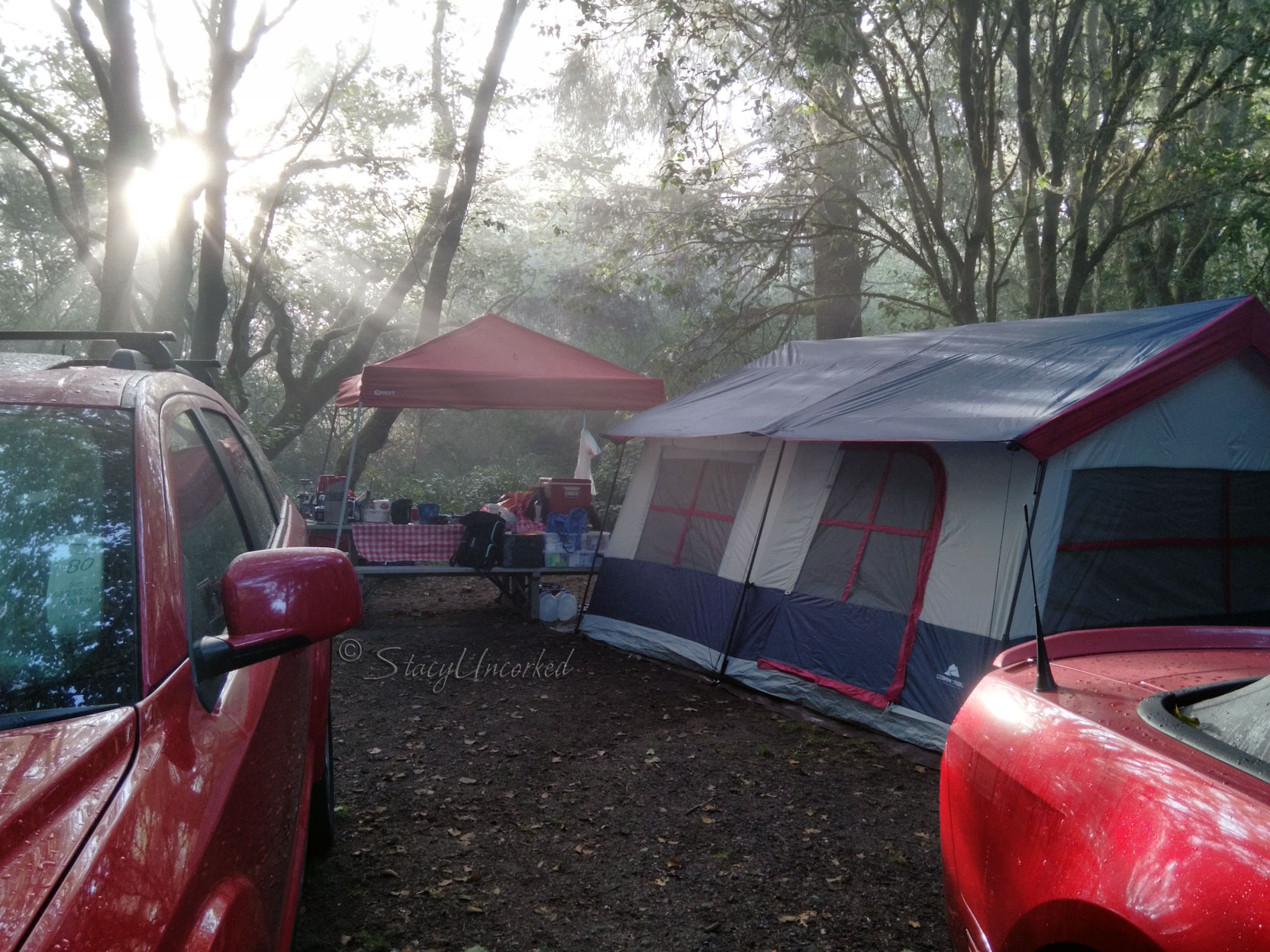 I especially liked how the sun was coming through this grove of trees at the back of our site: 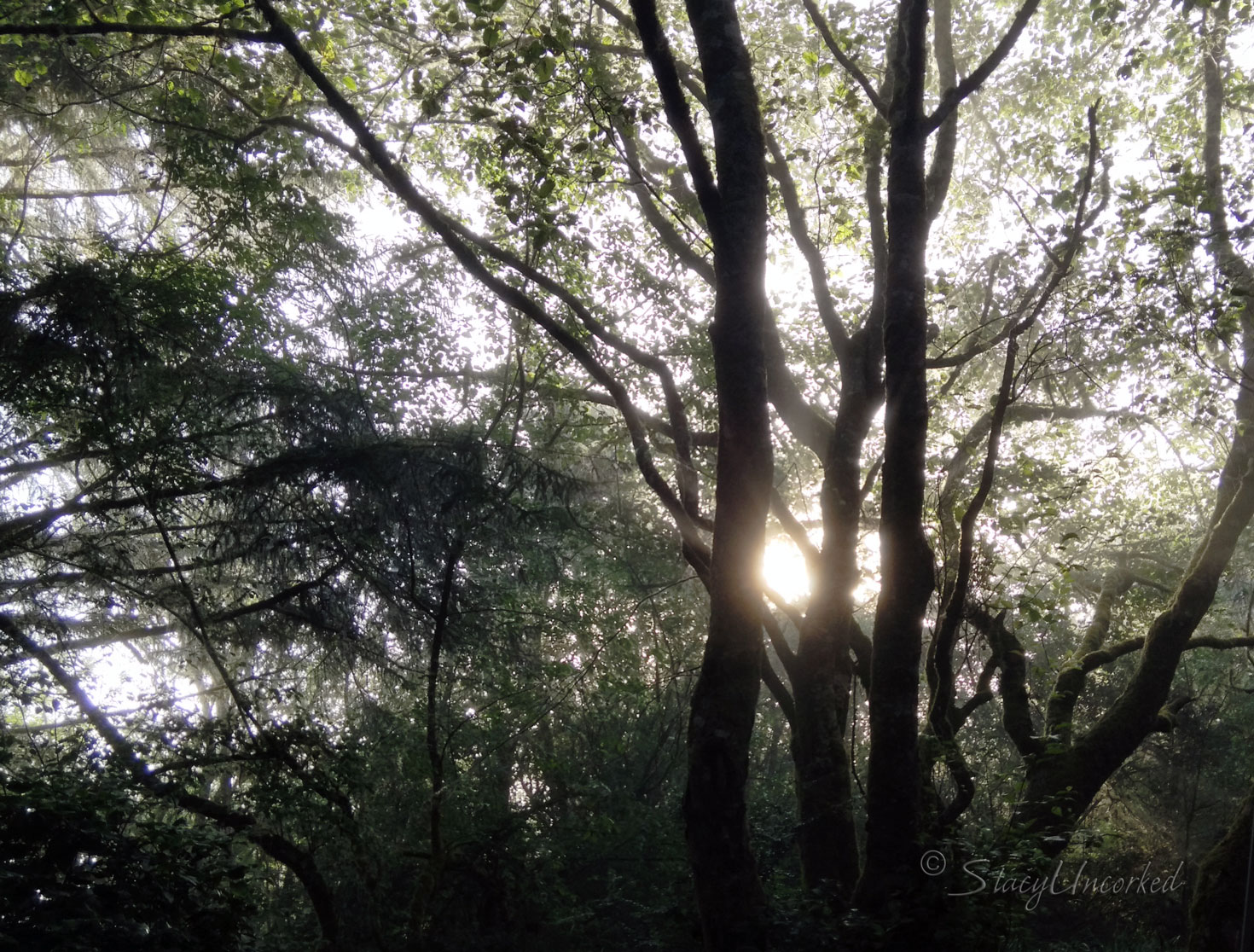 Of course we had to have our coffee, so I ended up getting this cool propane coffee maker (I got a different one that goes directly on top of the camp stove, but wanted to be able to utilize both burners and have coffee, so found this independent one instead): 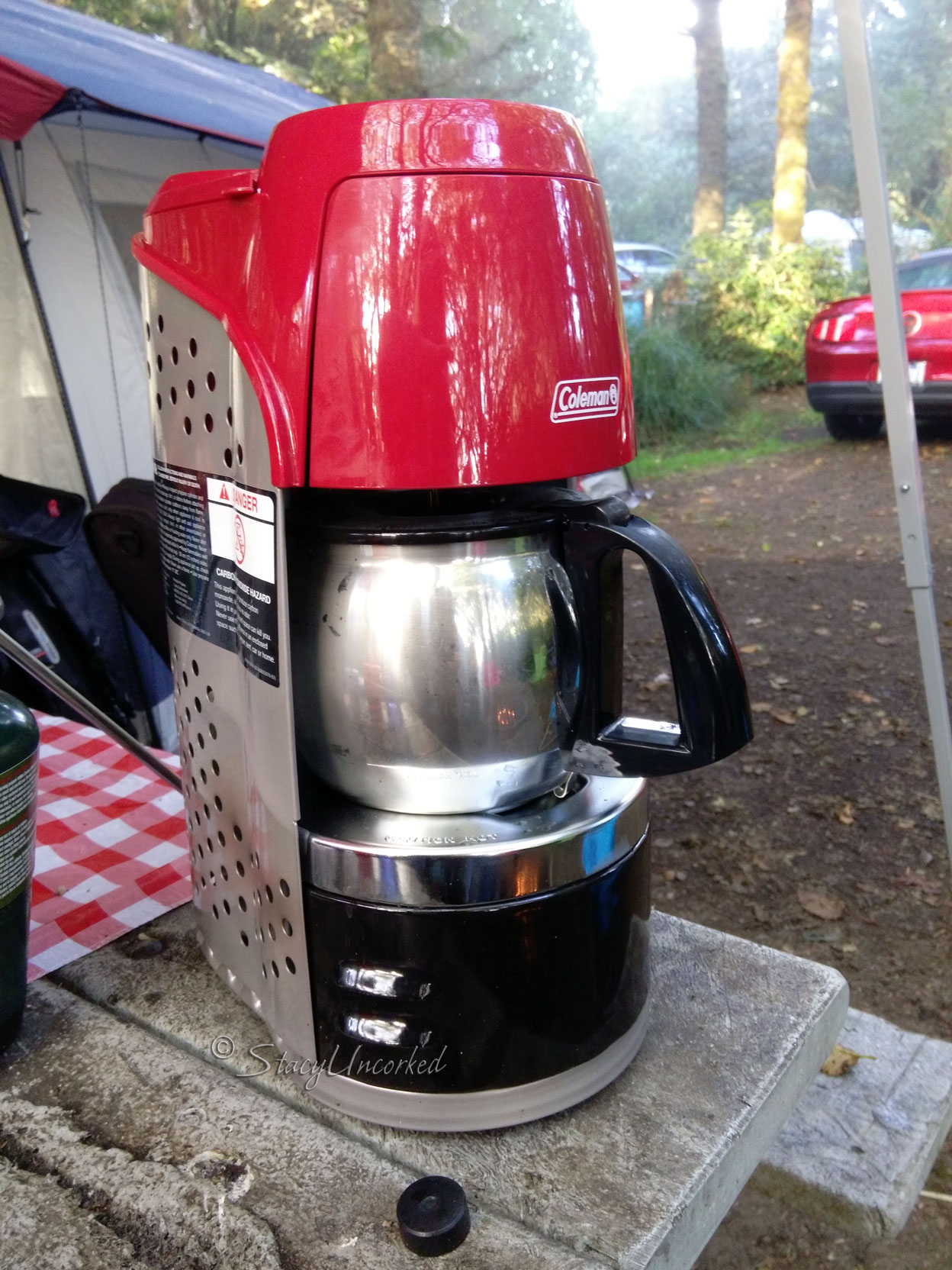 We plan to do a lot more camping next year, especially since Washington State has so many cool places to camp. This year I wanted to keep it to a minimum to see how the hubby and kids would like it without burning them out on it too fast, and they’re all looking forward to it from the last few successful foray’s into the wild-ish.

With camping at the ocean over the weekend, the kids and the hubby finally got to experience some of the fun I always had growing up here and camping at the ocean for a week at a time. They’re looking forward to going back, and all but The Nag have expressed an interest in camping for a full week there, since there’s so much fun to be had, and a weekend wasn’t enough time to explore everything.

The Nag will agree to a full week if she’s allowed to have data while she’s there to keep up on her kid-version social media. She was apparently going through major withdrawals this weekend, lamenting about the lack of data (I didn’t tell her I actually had signal and data on my phone where we were, I decided to stay off the ‘net and enjoy myself instead, hoping to set a good example).

But you know, I’m a mom, and moms are lame. Yeah, just you wait, kid. Just you wait.

Speaking of waiting… I don’t know what happened earlier in the day on I-5 Northbound, but our normal just-over-2-hour-drive from the ocean back home turned into a nightmarish 7 hour ordeal. Seven hours.

I’m sure that had some bearing on the hubby’s subsequent eye irritation after exposing it to the salt air, since we drove separately to transport two kids, two dogs and all our camping gear more easily.

We ended up getting off the parking lot of a freeway still about an hour from home, but then sat in the side street traffic for over an hour, only advancing one measly mile during that time. So not fun.

We finally extricated ourselves from the continuous parking lot and found some back roads home that took us further West before doubling back to finally get home. We never did find out what caused the issue, looking for that after the fact on local news sites online wasn’t helpful, since by then it was no longer ‘breaking news’.

Hopefully our next ocean trip in the fall will be less traffic stress induced for the return trip. Or either direction, for that matter. *fingers crossed*

Now that summer is winding down… Princess Nagger has her pre-school tour of her new school this week (7th Grade! GAH!) – I’ll have to be sure to curb my enthusiasm as we find her new classrooms and locker and meet her teachers – she’s at the age of not wanting any kind of public displays of attention.

Princess Nagger already hates me right now, because she’ll be acquiring braces in September. We tried to get it scheduled before school starts, but the orthodontists schedule didn’t mesh with ours, so September it is. I’ve heard the words “I hate you” no less than 10 times.

I know she really doesn’t mean it, and I know she’ll thank me later. But right now? Apparently I’m not only a horrible mother, I’m a horrible person. This too shall pass.

Switching gears… Have you ever thought about how crazy the English language is, what with many similar (or same) words meaning different things? Case in point:

The doctor was patient with his patient which made his other patients lose their patience.

Queue: A word in the English language with five letters and we only pronounce the first one.

If he could read, he would have read that book.

The bear could barely bear it.

If a building is already built, why isn’t it called a built?

In other news… Did you see the video of the dude who shocked his wife with a pregnancy announcement before she knew she was actually pregnant? Totally worth a look-see:

Well hello there! Talk about a busy week! The movers got us all moved on Sunday the 22nd, I had to go back to the old house early last Monday morning to pick up the stuff that couldn’t quite fit, … Continue reading →

I keep a notepad thingamabob open on my computer, and when I get inspired or have a brilliant idea, I’ll add it to that notepad file to pull together those creatively jumbled thoughts and put it in some semblance of … Continue reading →

12 thoughts on “More Camping Fun; Winding Down Summer; The English Language and a Funny: RTT Rebel”