Another gorgeous weekend has come to an end – hope all you mothers and mother wannabe’s had a great Mother’s Day yesterday. I certainly did. I’ll fill you in on the details tomorrow.

And now it’s Monday – the most dreaded day of the week for the most part. Except when you throw in some music – that takes some of the dread away, right? This week’s theme is “Mother’s Day tunes (songs that have the word Mom, Ma, Mother in it and/or a tune that reminds you of your Mom”!  Might want to have some tissues handy, there will be goosebumps and you might get something in your eye…let’s do this!

Let’s start off with a favorite trio of mine, who happen to be siblings.  The sister started singing in her own band as a teenager with her brothers acting as her roadies, and at ages 8 and 10 they began performing as an opening act for her.

Give a listen to The Band Perry with “Mother Like Mine”:

Next up is a song recorded by an Australian country music artist that was released in April 2005 that peaked at number 3 on the Hot Country Songs chart, giving this artist her sixth Top 40 country hit, and her third top ten hit.

The artist had been saying to all her co-writers that she really wanted to write about family, and write about her little girl. She was quoted as saying:

“The Thing for me was, when you have a baby you start thinking about your own relationship with your mother, and when you were little, how much you looked up to her. Then you move to, ‘Gosh, my baby looks up to me so much. I don’t want to let her down. I want to be a hero to her.’ Then you start thinking it’s not just your mother, but about the other generations of women. My grandmother – I was close to her before she passed away. I think this song is a real tribute to the women in my life.”

“The keeper of the Cheerios” is just one of the roles the artist laid out for moms in this sentimental effort that examines mothers in multiple situations: parent to a toddler, mother of the bride and caretaker of her own elderly mom.

Give a listen to Jamie O’Neal with “Somebody’s Hero”:

Next up is one of my favorite songs from a favorite artist. This song was released in 2003, a year after Princess Nagger was born, and it resonated with me in a big way, hence I consider it our song.

Interestingly enough, the songwriter didn’t have a daughter when he wrote this song – he relied on observation and his own imagination to translate the emotion to paper, observing the relationship between his mother and sister, and his brother and niece, he could see how powerful it was.

Even though the songwriter was living in Switzerland at the time, and had never written a country song, he was sure he’d written a tune that would make a connection with the right country singer. He told friends he was going to Nashville to meet Garth Brooks, certain that Garth would be the perfect artist to record the song, since he has three daughters.

Garth liked the song, but didn’t record it – then this artist heard it later and fell in love with it, vowing to record it herself. And the rest, as they say, was history. 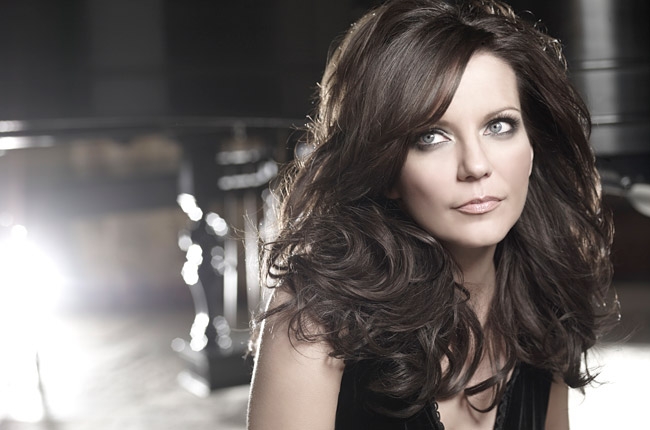 Here’s the gorgeous Martina McBride with “In My Daughter’s Eyes”:

Next up is another favorite artist who thanks her mom for teaching her some important life lessons in this song. The song talks about finding the right guy for mama’s little girl, and is the most personal of the seven tracks this artist co-wrote for the album.

I especially love how Carrie talked her mom and husband into appearing in the video with her. It’s a family affair!

Last, but definitely not least, we’re going to end on a hilarious note with this next favorite artist. She had this to say about this next song:

“The reason I love this song is because it’s about how sometimes when you get your heart broken, you kinda go a little bit crazy,” she confessed. “You drink too much, you smoke too much, you cut your hair… you find a rebound. Sometimes your mama, if she’s like my mama, has to slap you around and say, ‘Straighten up girl!'”

This artist almost didn’t get to record this song – written by fellow artist and songwriter, Kacey Musgraves, it just so happened that Kacey’s sister was taking pictures at this artist’s wedding, so both she and Kacey were there for both the wedding and the rehearsal dinner. The artist went up to Kacey and asked if she was going to cut this song, or if she could have it.

Kacey needed a couple of days to think about it, but ultimately granted this artist permission to record it, provided she got to sing harmonies on it. Done! So the harmonies you hear in the song is Kacey. Cool, no?

6 thoughts on “Mother Like Mine is Somebody’s Hero – In My Daughter’s Eyes Mama’s Song isn’t Mama’s Broken Heart!”