I don’t know what it is about Thanksgiving week, but I’m all bouncy and excited about having our first Thanksgiving in our new house. I know, I’m out there sometimes – Princess Nagger gets that from both the hubby and I. We’re all out there.

I did manage to get a turkey last week, so we’re all set. In fact, I couldn’t really decide between my usual Butterball or Target’s Market Pantry one, so I bought one of each. Then I flipped a coin (not really) to decide which one to cook this week. Butterball won the coin toss, since I’m cooking for 12 people this week, and I figured now wasn’t the time to switch up my recipe – and Butterball has been the turkey of choice all these years past.

No need to reinvent the wheel this week, right?

Speaking of turkeys… Did you hear about that guy who stole pretty much all of Kroger’s turkeys a couple weeks ago and was selling them off the back of a truck? Not really, but he was selling them from the cold warehouse he runs. What a turkey.

He apparently stole thousands of pounds of frozen turkeys, worth thousands of dollars, but luckily the sharp security of Kroger somehow discovered what he was up to, so they formed their own sting operation and posed as a church group wanting to buy some of the cheaper-than-the-supermarket turkeys.

59 cases, 2,309 pounds – the dude charged them $1962.65. That computes to 85-cents a pound, which is 33-cents a pound cheaper than the cheapest I’ve seen (without having to buy a minimum dollar amount of groceries to get a discount).

He of course got raided by the Memphis Police Cargo Theft Task Force (say that three times fast) and was busted. He was able to post his $10,000 bond (I’m going to assume they were turkey dollars), and his hearing in court? The day before Thanksgiving. I’ll be curious to see if the judge roasts him.

Speaking of roasts… Blackspot decided he was going to try my turkey roasting pan on for size: 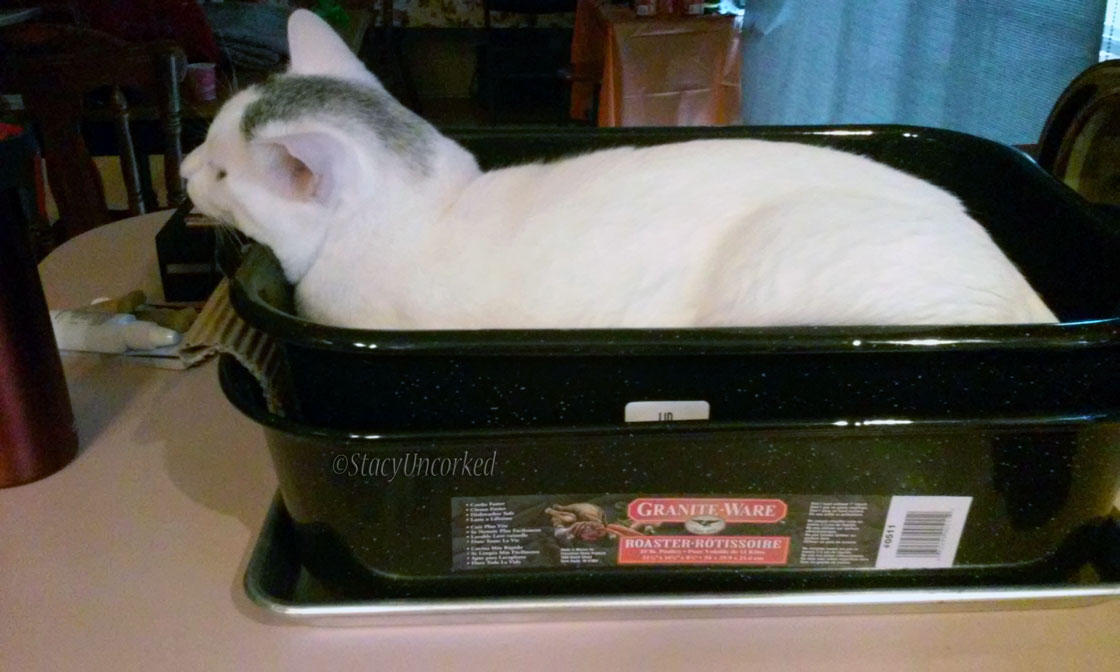 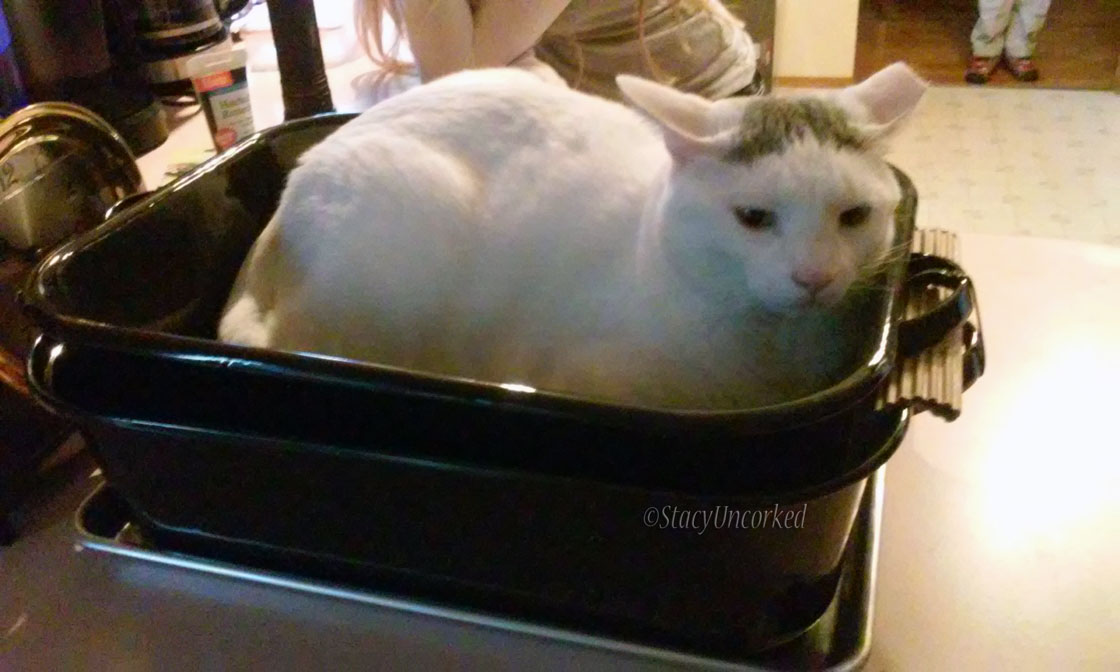 In case you were wondering why the frumpy look, I wanted to make sure he wasn’t thinking it was a litter box without litter, so I smacked his butt when he first jumped in. I didn’t want have to buy yet another new pan.

Princess Nagger came up with the great hashtags for Instagram/Twitter/Facebook when I posted it simultaneously on those: #TurkeyCat #EatOrBeEaten #TheTablesHaveBeenTurned. Pretty clever, no? If you need creative hashtags in the future, Princess Nagger said she’ll hook you up.

Speaking of hooking up… not… Over the weekend I was perusing the Christmas sales on various websites, and since I have a preference for deer items, I was going to hunt down some cool Christmas deer to decorate our new house with this year, and noticed a glaring typo on one website:

Can you spot the error? Silly question, you guys are all smarty pants.

Speaking of Christmas decorations (because you know that’s what I was doing)… I spotted this yesterday when I was out shopping, and have been thinking about it non stop since spying it on the shelf, and have decided I really need to go back and get it to put in our front yard for the Christmas season: 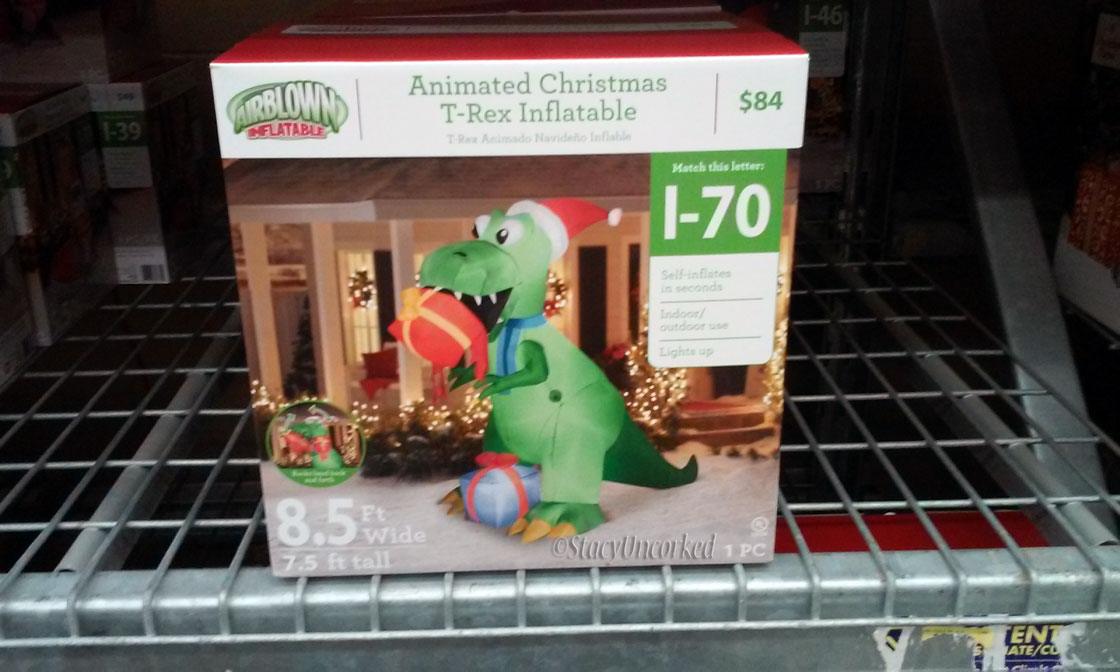 Yep, leave it to us to not want to go with a traditional Santa or sleigh or nativity or reindeer (though there will be reindeer, because I said so). We’ve never had any sort of blow up doll on our front yard (our old house wasn’t conducive to it), but our new house can effectively have a nice Christmasy blow up doll and we have to go with a dinosaur.

And now I’ll leave you to your own perverted images in your head.

Here’s hoping it’s still there when I go back to get it, since there was only one left. Hopefully Murphy and his Law are taking a nap.

October has arrived! Well, at least I hope so – I’m getting this all ready to have scheduled to go live while I’m resisting the urge to spend too much screen time post-Lasik surgery. I am editing to add here … Continue reading →

4 thoughts on “Talking Turkey with a Thief and a Cat, plus Christmas Blow Up Doll: RTT Rebel”