However, the decision didn’t come until after she’d already been at her new school (since our new house put us in a different school district than when we were basement dwellers at my parents’ house) in her new class with her new teacher a week.  Still with me?

Since she’d already fallen in love with her new teacher and suddenly got excited about school all over again (details on the prior school/teacher fiasco coming later – it’ll simply solidify that teachers really do  make a difference) we decided to just let her stay where she was at, in a ‘regular’ classroom, since moving into the gifted program would mean a different class and teacher.

I wanted to let her enjoy the second half of the school year (not saying that she wouldn’t, since her new school has been an improvement by leaps and bounds) so letting her stay where she was at after the stress of the double-move was the intelligent thing to do, and the best thing for her.

At any rate, I thought today I would do something a little different and share a piece of homework that Princess Nagger had to turn in just before her Spring Break – the assignment was to pick five different things to write, or write 2 pages of anything that isn’t a list.  She opted for the latter, since she tends to be on the wordy side like her Mama (Ahem), not to mention she’d written a poem she really wanted to share with her class.

I can’t forget,
What I’ll regret,
‘Cause that’s why I’m alive.

When I die,
Time will rise,
And fall upon the winners.

But then I start to fly,
High in the sky…
And forget all that has happened.”

(There’s kind of a backstory to this poem, and this is how I’m going to spend a 2-page report. Try to deal with it.)

This poem started with me doing some browsing on the internet. I was searching for a game I heard of called Spore, where you create creatures and survive in a pre-set unknown planet that you can name yourself, and wanted to try it. So I bought the game. I created my account and played for large chunks of time, since I was on summer vacation and I had nothing to do. Since there’s an online sharing system, I found a few friends, created some buildings and animals, shared them, and went on with survival on planet “Earth Maybe.”

After many weeks, then months, and almost a year after I joined Spore, I had completed many save files, made almost 50 friends, and discovered something all the people of Spore do.

I kind of freaked when I heard there were dragon contests, bird contests, even spaceship contests that anyone can enter a creation in. I had also found some color contests (and I gladly entered them, of course) that just asked you to “color this snake as creatively as you can.”

So it was some time after I had found a friend with the user name of “cheekymoomoo” that she posted a poem contest. “Write the best poem you can think of. Poems will be judged at the end of Aug. By their originality.” I did the only thing I could possibly do: Enter the contest.

It took about 40 minutes just to get the poem figured out. I had thought about how bored I was and that I was losing time to have fun fast, and that I couldn’t deny it. That’s how I finally got “I can’t deny, the loss of time,” as my first two lines. At some point, I thought it smart to ponder the next line faster and tried to think of something good, but then the only thought I had was to say that time was flying by without me even knowing it. So I wrote “I never knew I had.”

The third line had nothing to do with time, it’s just me saying that I can’t keep forgetting important things that I might regret later on when they happen. And so I realized that I couldn’t put everything on one line, so I split it into two.

I had no thought or meaning to the next lines, I thought they sounded neat though.

“When I die,
Time will rise,
Then fall upon the winners.

But then I start to fly,
High in the sky,”

And so we come to the final line.

I thought about my character would have no memory of anything when she woke up, so I just put it in. No thought.

“And forget all that has happened.”

The good news is I went and entered it with a nice creation, a flying bird with a single feather missing. I won first place, by the way.

And now the deepest thing I’ve ever written, as said by a random person I don’t know:

“I am Icewind. I am on a quest. My sister is dead. I am going to die here. I am not coming home. I have no family. I have traveled the mountains searching. I have found nothing.

I am hungry. I am tired. I am most likely doomed.

There you have it – what do you think of her writing style?  I, for one, am very proud of her work, in fact I was rather amazed by it.  Of course I’m prejudiced since she’s my precocious 11 year old. 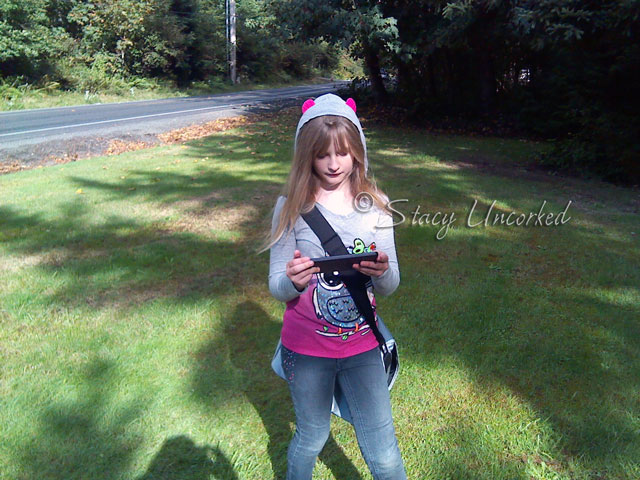 I’m to interject here that I encountered protestations from the Princess Nagger about posting this on my blog, since she tends to be protective of her creativity, and fears how people may or may not perceive her from her writings.  I’m sure she’ll get over it.

I’m also to tell you, per her instructions, that I “stole” her Surface to acquire this written piece, and she only acquiesced when I said she would be free to watch Full Metal Alchemist if she cooperated with my retrieval of her document.  Done and done!

I’m sure in spite of her protestations, she’ll love getting your feedback.  After all, she tends to think she’s a bit famous being the ‘star’ of my blog.