Holy cow this past week flew by in the blink of an eye!  Is it Tuesday already?   Well, when I publish this later tonight, it’ll still be Monday on the West Coast – so in the literal world, that answer would be no.  Semantics, right?  No matter what, it still means it’s time to get Random – so let’s do it!

Remember how last week I still hadn’t sifted through the 500-and-some-odd pictures on my camera from our road trip out here?  Well, they’re still sitting unsifted.  Hopefully I’ll find some time to get on that – sooner rather than later.

I did get to enjoy the most scrumptious Vegetable Tempura over the weekend while the hubby and I were out running errands:

Doesn’t that look delicious?  You’ll notice that I ate half of one of the onion rings before I remembered to stop and take a picture.  I was that anxious to dig in.

That was something I’d been missing while living in Pennsylvania – or at least the area we lived in for 16 years, no Teriyaki or Tempura!  I know, I was deprived.

The other type of food I was deprived of was Thai – and of course I misspelled it when I posted an update on Facebook, but luckily no one pointed that out to me so I only had to be embarrassed in my own head.

We went to a really cool Thai restaurant the other day (and I failed my blogger duties by not taking a picture of my plate of food, tsk tsk!) but I did get a shot of the unique faucet in the ladies room (I know, I’m weird like that): 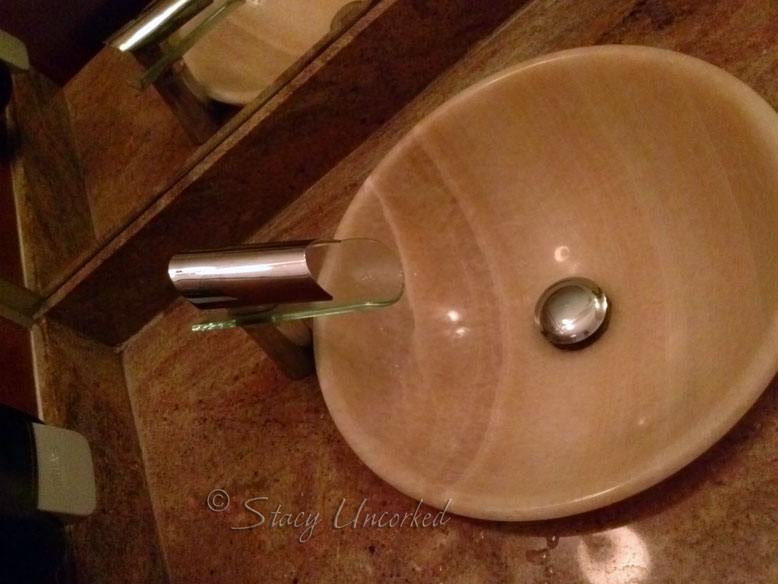 While I was taking a picture of one of the two sinks with funky faucets, a little girl came in to wash her hands and gave me strange looks because I was taking pictures.  I had to take a pic of her using the other sink with yet another funky faucet: 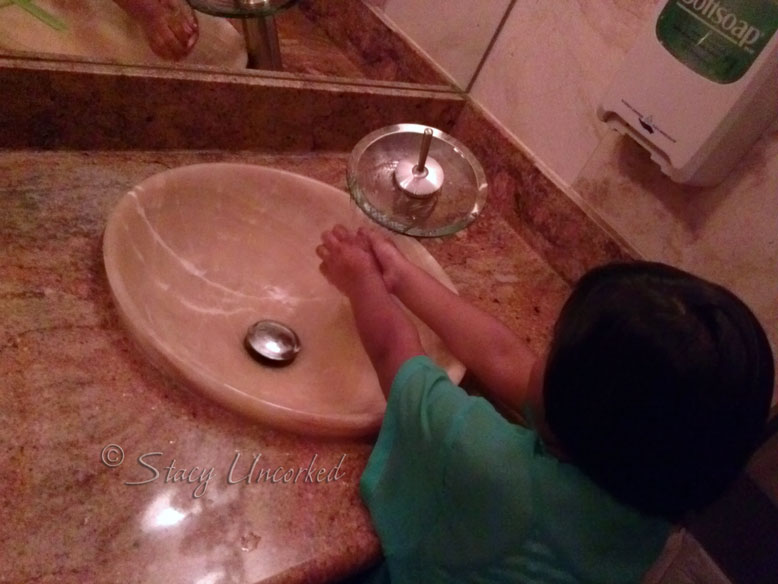 Wonder if I could talk the hubby into letting me install one of those funky faucets in our new house?  I’ll keep you posted.

My life is now complete – I had Tempura and Thai in the same weekend.  It doesn’t take much to make me happy.

Speaking of happy… Princess Nagger is loving her new school and has already made some new friends – she’s even been invited to her very first classmate birthday party this weekend, so that’s made her even happier.

Little Dude seems to be coping well as a Kindergartner – though with his ADHD and ODD diagnosis (no medications yet, because we’re still trying to beef the boy up) he does lend a bit of a challenge to the teacher.  But she runs a tight ship like we do at home, and so far there haven’t been any meltdowns when she’s made him conform to the rules – I did warn her that the meltdowns may happen after the honeymoon is over, so at least she’s aware.

I’m very impressed with the school district so far, since they’re on top of the potential special needs LD might be facing with his learning.  That’s one of the reasons we’d like to stay in this school district when we buy a house, so we don’t have to ‘start over’ in a new district with the kids and their uniqueness.

Speaking of buying a house…  We already made an offer on one, and while it’s not my dream  house, it’s a great  deal and it does have the top three criteria on my wish list – a huge gourmet kitchen, a huge master bedroom with a great attached bath that has a jacuzzi/soaking tub and separate 4-foot by 4-foot shower and two sinks (so the hubby can have his own  sink to mess up) and it’s in the current school district the kids are enrolled in.  Oh, and it has lake access.  Bonus!

Our offer is contingent on our PA house selling (since it’s paid off, and we’ll be using the purchase price cash as a huge down-payment – we already have the balance worked out and lined up) so hopefully our realtor has her magic wand charged up so we get an offer and close on PA sooner rather than later.  It would be really cool if we could close and be moved in by Thanksgiving.  *fingers crossed*

That‘s a wrap for this week – I’m still trying to get back on track, and still trying to find time to get back in the groove with my blogging, especially the visiting all you awesome people part (which is sadly lacking at the moment) – having uninterrupted time at my computer seems to be a non-existent entity at this moment, so please bear with me as I attempt to snag time as it comes along.

Meanwhile, link up and join in the fun, everyone is welcome – random or not. Be sure to visit your fellow randomizers so they don’t feel so lonely.

It’s Tuesday again – well, you know, the arrival of Tuesday happens every week. Go figure. For everyone who had a three-day weekend, rejoice! I sorta did, but had to do some work yesterday to make sure I don’t end … Continue reading →

Well hello, Tuesday!  It’s only the second Tuesday of the month, but it sure feels like it should be later in the month? Anyone else feel that way right about now? Just me? Remember all the beautiful snow we got … Continue reading →