Well hello there.  Did you miss me?  I’m baaaaaaaack!

I must say moving across country is for the birds.  But we made it safe and sound, the kids have loved their first few days of school, and our stuff the movers picked up way back in August finally  arrived yesterday.  We’re still waiting for U-Haul to let us know when our U-Boxes arrive, but we’ll chat about that fiasco tomorrow.  Today it’s all about music!

My bloggy buddy Denise of RunDMT was a previous spotlight dancer, and she suggested today’s theme be “In your playlist”.  What a perfect way to start off getting back in the groove!  Especially since I have a few songs that were not only on repeat on the long cross-country road trip, but they’re stuck in my head.  So maybe they’ll get stuck in your head, too.

The three songs are from one duo, since it was a CD I kept going back to over and over again on the trip (hopefully Princess Nagger didn’t get too tired of hearing it repeated incessantly).  The duo created the CD together after a five-year hiatus – a hiatus that made people wonder if they’d broken up.

When they returned to the studio, they thought the music would have to go somewhere new after such a long break.  They hired Dann Huff, the onetime rock guitarist who has become a top-shelf country producer, scoring hits with Rascal Flatts, Taylor Swift and Carrie Underwood.

The opening song of the album was written by the duo in collaboration with rockers Jon Bon Jovi and Richie Sambora, friends whom the duo considers “like big brothers to us.”

And just a reassurance to my non-country music fans – trust me, you won’t be cringing when you listen to the tunes I’ve chosen for this week, I promise.  Give ’em a listen and you’ll see.  Here’s Big & Rich with “Born Again”:

Next up is a great song that had both Princess Nagger and I rockin’ and singing, especially with the chorus:  “Turn it up, turn it on, turn it loose / Oh oh / Give it everything, win or lose / Oh oh / Time to own it and rock it / Let everybody know you got it / Ya getcha game on”.

I couldn’t find any ‘regular’ music videos, but this one with a girls basketball team was pretty good just so you can listen to the song.

Here’s Big & Rich (again, this time featuring Cowboy Troy) with “Get Your Game On”:

Next up is another rockin’ tune where Big and Rich once again become the wild-eyed, brash, cowboy rockers that originally attracted so many fans to their diesel-powered style when they debuted in 2003.  No one is going to accuse John Rich and Big Kenny of excessive versatility, but they do what they do with genuine conviction and passion.

It’s heavy on guitars and booze and light on sensitivity. This isn’t an insult. No bigger mistake can be made than trying to do both — something the two men have always understood.

Last, but most certainly not least, is the song that got the most play while on our trip.  Big & Rich love to have a good time – and it shows, particularly in this tune.  Besides, who doesn’t want to rock the boat every so often, right?  I’m ready!

Without further ado, here’s Big & Rich with “Rock the Boat”:

See? Wasn’t that fun?  A great little anecdote about this particular album is that Bon Jovi is the one who gave the album its title, “Hillbilly Jedi”.   As a joke, he had mentioned to Big & Rich that if he’d ever saw a couple of hillbilly Jedis, it’d be those two.

They all laughed about it, but it stuck – but The Force wasn’t with Big & Rich when they proposed the title to their label.  The word Jedi  is owned by George Lucas, who coined it in his script for the original Star Wars (1977).

Lucasfilm is also famous for guarding its trademarks zealously, so the title was out — until Bon Jovi again stepped in.  He called up George Lucas and explained that his buddies Big & Rich wanted to call their album Hillbilly Jedis,  but that the legal department was telling them they couldn’t.  He asked if George would be ‘cool’ about it and let them call it that.

Lucas agreed, but he had one caveat – pointing out that the word is not Jedis, since there’s no “s” in Jedi, ever.  Jedi  is singular and plural, like deer.  They had absolutely no problem with that, and the rest, as they say, is history. 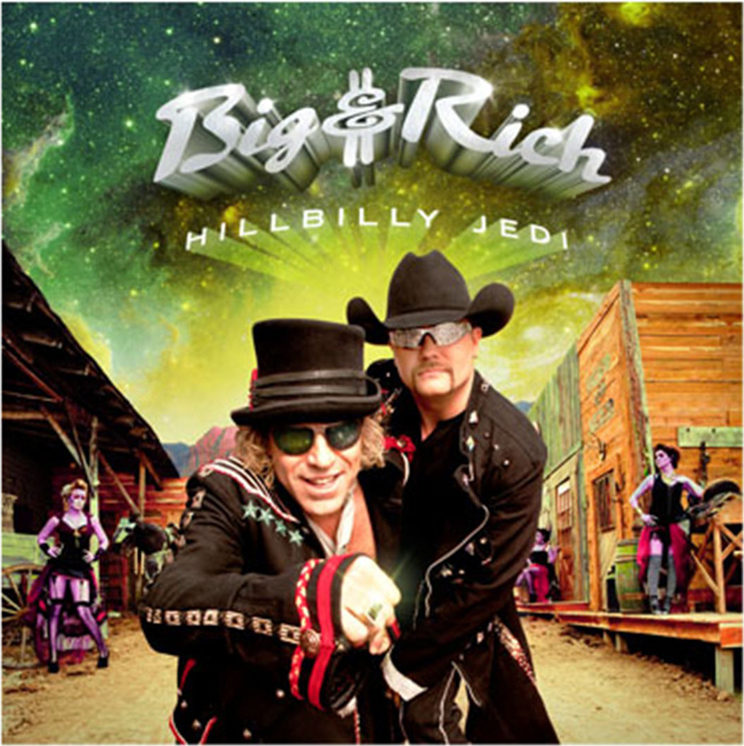 What’s your favorite song on repeat at the moment?

I have the supreme honor and privilege of being a co-host with the inimitable Xmas Dolly and our musical cohorts, Callie from JAmericanSpice, Cathy from Cathy Kennedy’s Blog, and our Honorary Co-Conductor, Naila Moon at Just the Stuff Ya Know.

22 thoughts on “Born Again so Get Your Game On – let’s Party Like Cowboyz so we can Rock The Boat!”