Hallelujah for Friday!  Princess Nagger’s especially happy since it’s a three-day weekend for her, and next week is her last week  of school.  This year seemed to fly by extra fast – I really need to stop blinking so it can slow down.

I missed Friday Fragments last week because I was down for the count with a dead laptop.  It was dead because I inadvertently killed it.  It took me a little over 48 hours to revive it, but thankfully it’s back in full swing.  I, however, have yet to get back in full swing since I’m still playing catch-up.  So let’s get started, shall we?

Before we get to the entertaining fun, I just want to say that the tornado in Oklahoma was so heartbreaking – the destruction, the loss of lives, completely mind boggling and sad.  If you’d like to help the victims, US News has a a list of many ways to do just that – I’m going to do what I can, and certainly will be keeping them in my thoughts and prayers.

In other news…  I’ve always been a fan of Kellie Pickler – she’s cute, dorky, and even though she didn’t win American Idol the year she was on, she’s done quite well for herself since.  I don’t watch Dancing With The Stars, but a news article caught my eye about the freestyle dance she did in the finals:

It would be so cool to be able to dance like that!  Here’s a video of the dance so you can be amazed:

Amazing, right?  I was happy to hear she won the whole thing – the cool thing about her is she doesn’t let fame go to her head.

Speaking of humble winners…  One of my favorite country boys won Celebrity Apprentice! I love how humble he always is, and after being runner-up to Piers Morgan 5 years ago, it was nice to see this boy shine:

And of course he makes awesome music. I’m loving his newest album that was just released last week.

Speaking of favorite country boys… One of my favorite country singers, Jake Owen, had to do a little improvisation at his May 17th show in Charleston, South Carolina while performing Van Halen’s “Jump”.

He was doing air splits (for lack of a better description) when he sang the chorus, and the crotch seam of his jeans gave way – front to back.  Normally this wouldn’t have been a huge issue, but he had decided to go commando that night.  Ahem.

He ended up having to use his t-shirt to create a makeshift cover so he could finish the set:

Good thing he’s been working hard at keeping himself in shape so he wouldn’t have to be shy about showing off his killer abs.  He later tweeted:  “going commando=bad idea. Although, great breeze here.”  Gotta love his sense of humor and how he took it all in stride.

Whatever brand of jeans he was wearing probably won’t be relied on for future concerts.  Just sayin’.

Still speaking of favorite country boys… You regulars already know how much I love and admire Brad Paisley – well, he’s gone up a few more notches in my book, because he made a promise to one of his fans he met during a ‘meet and greet’.

A fan was stricken with pancreatic cancer and only had weeks to live – during his meet and greet with Brad Paisley, he gave one of his personal guitars to Brad, telling him if he was going to play it, he wanted him to keep it, and if he wasn’t going to play it, make sure to give it to someone else so it wouldn’t collect dust.

Paisley followed the instruction he was given – toward the end of recording his new album ‘Wheelhouse,’ he plays the guitar leads on ‘Officially Alive’ with that guitar.  As the album ends, it’s one of the last things you hear.

“He told me, he said, ‘I want this to live on,’” Paisley remembers. “So we ended the record with it.”

The terminally ill fan (who passed away last November) and his guitar are living on forever in music history. More proof that Brad Paisley is not only an awesome artist, but truly a stand-up guy.  And easy on the eyes:

That’s a wrap for this week – don’t forget, if you have fragmented or random thoughts more than once a week, you’re always welcome to join me for Random Tuesday Thoughts each week as well. Have a great weekend!

I’ve brought back the Friday Free For All I used to have available for you – link up any post you want, and so I can find you should you become a new stalker…I mean follower…of me (no giveaways though, please – because this is not a giveaway linky.):

I made a button if you’d like to snag it so you don’t forget to stop by to visit each Friday (I’m not above begging, y’know): 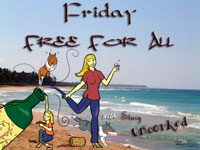