Way back in the dark ages (you know, 10 years ago) the hubby and I both had cell phones, but we were on pre-paid (or pay-as-you-go, if you will) plans because we just aren’t phone people.  Occasionally text, sure, but chat on the phone – not so much.  Face it, we just don’t like talking on the phone – either of us.  It tends to be a time suck (no offense to those that we do talk on the phone with).

Even on the prepaid plan, I always opted for a better phone – and every once in a while I even opted to pay just over a dollar for 24 hours of Data Service to access the interwebs when I was out and about (for the occasional tweet or Facebook update since my DumbPhone didn’t have WiFi) though updates of that nature are something I don’t do very often when I’m out and about, since I’m otherwise occupied whilst out and about.

But the lure of a SmartPhone vs. a DumbPhone was always there – and finally the hubby crossed over to the dark side and signed us up for a two-year contract, picking up SmartPhones for both of us.  It was nice finally entering into the 21st century on an official capacity.  Ahem.

Now, almost two years later, our SmartPhones aren’t as smart as the current SmartPhones, and mine was having issues after a firmware update where I was having to pop the battery and do a hard reboot of the phone since it kept freezing up all the the time – and usually when I needed it most.  We were eligible for free phone upgrades, but were weighing all our options because a ‘free’ upgrade meant 1) paying for a new/better/faster phone and 2) committing to an additional two year contract.

Crunching numbers, it just didn’t make sense to continue on a contract basis for another two years.  Our so-called “Family Plan” with AT&T consisted of just the two of us – Princess Nagger won’t be getting her own cell phone until she’s 13.  I don’t know why we decided on 13, maybe it’s a magical number, or because it’s when she’ll officially become a Teen vs. Tween and will have earned the honor of a cell phone by then.  I know, my mind works in mysterious ways.

Our basic minimum monthly bill from AT&T always came in at $156 a month, give or take $10 or $20.  The breakdown was $60 a month for the first phone, $10 for the second phone, $30/mo. Data Plan for my phone and $25/mo. Data Plan for the hubby’s phone.  We opted out of paying an additional $20 a month per phone for unlimited texting – since we don’t text much, and instead with with the pay-per-text of 20-cents a text – and always came in under $20 total for both phones per month for texting.

So looking at it a different way – that basic $125 (which obviously doesn’t include the exorbitant taxes and ‘other fees’ which every month brought our grand total to $156+ per month) is simply for the convenience or privilege of having two phones on a contract service.  Where the signal here at our house (or other areas, for that matter) just plain sucked.  One bar for phone signal?  Even if my land line was out of commission, I still couldn’t make an emergency call to save my life since there’s no solid signal here.

Paying more than $1800 a year for both our phones is crazy, isn’t it?  Especially since we don’t use our phones that much – and paying for Data Service (which is required when you have a SmartPhone, by the way) that we don’t use since we usually connect with our phones through WiFi vs. Data because it’s a faster connection.

We kept thinking back to the ‘good old days’ when we paid $50 to $100 a year for our prepaid phone service – and actually had a signal on our old phones here at the house.  And everywhere else.  Nice, strong 5-bar signal.

I researched other carriers and other plans looking specifically at phones I wanted (since obviously, no matter what we were going to do, I was getting me a new phone).  But no one came close dollar-wise to what we wanted to spend (read: didn’t want to spend) for what we consider for ourselves as frivolous.

After much debate we decided to ditch our contract with AT&T and go back to prepaid with T-Mobile.  I hadn’t deleted my old number and account, I kept it active by adding $10 a year so my existing money/minutes would continue to roll over for another year.  I’m so glad I did.  Even though we ended up paying a pro-rated cancellation fee for getting out of our AT&T contract, when it was all said and done, we still saved over $300 on the 3 months left on our contracts.

Crazy, isn’t it?  And yes, I did buy a new phone so I could avoid the issues with my old phone – and I’m very happy with my new phone, even though I originally wanted to get a Samsung Galaxy S3 (since I had a Samsung Galaxy S – the first edition pf the Galaxy series) and thought to stick with Android since I had a lot of apps and games purchased and downloaded, but was also thinking of crossing over to the other side by looking at the iPhone 5.  Needless to say, both options were a no-go because the phones are too new, hence too expensive unless you’re committing yourself to a 2-year contract.

Instead, I ended up getting a great deal on an LG Optimum L9: 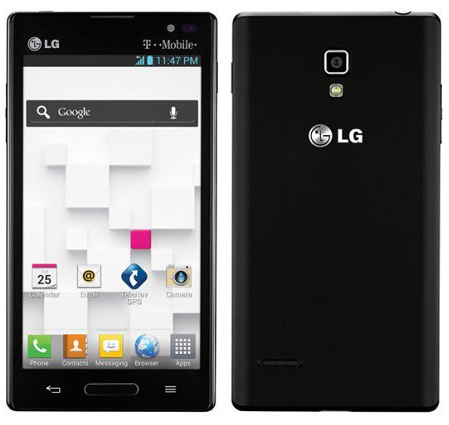 It’s faster than my old phone, the battery life is phenomenal, and even connects to WiFi easier – which will come in handy should I be without cell service somewhere that has WiFi because this phone allows WiFi calling as well.

I couldn’t be happier – plus the hubby is happy we’ll be saving more than $1500 a year on cell phone service – at least until Princess Nagger turns 13, then we’ll have to revisit our usage and options again.  Luckily we have 3 years to enjoy the cheap side.

Which brings me to this weeks question(s):

Do you have a SmartPhone on a contract, or something else?  Do you use your cell phone as your main phone or just an additional ‘while you are out’ phone like I do?

Kailani’s had her plate full and hasn’t had the linky up the last couple of months for Aloha Friday, so I’m bringing back the Friday Free For All I used to have available for you – link up if you’re participating in Aloha Friday or just link up so I can easily come pay you a visit:
Mister Linky's Magical Widgets — Easy-Linky widget will appear right here!
This preview will disappear when the widget is displayed on your site.
For best results, use HTML mode to edit this section of the post.

Note: None of this post is sponsored, paid for, or in any way advertising (or not) for Samsung, AT&T, T-Mobile or LG. The phone noted was purchased with my own hard earned money, and all opinions are all me me me.