I’m sure you’ve heard by now that VTech has yet another cool toy they’ve recently come out with, the Switch & Go Dinos:

When Princess Nagger heard we were getting some for review, she could not wait until they got here.  And when they arrived, she exclaimed that it was just like Christmas: 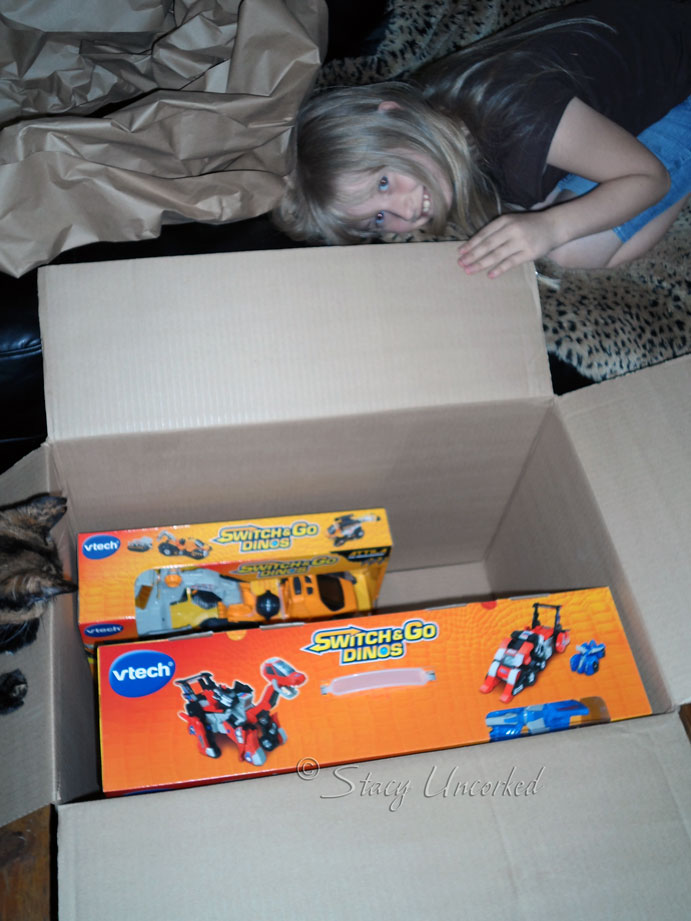 She received Brok the Brachiosaurus ™: 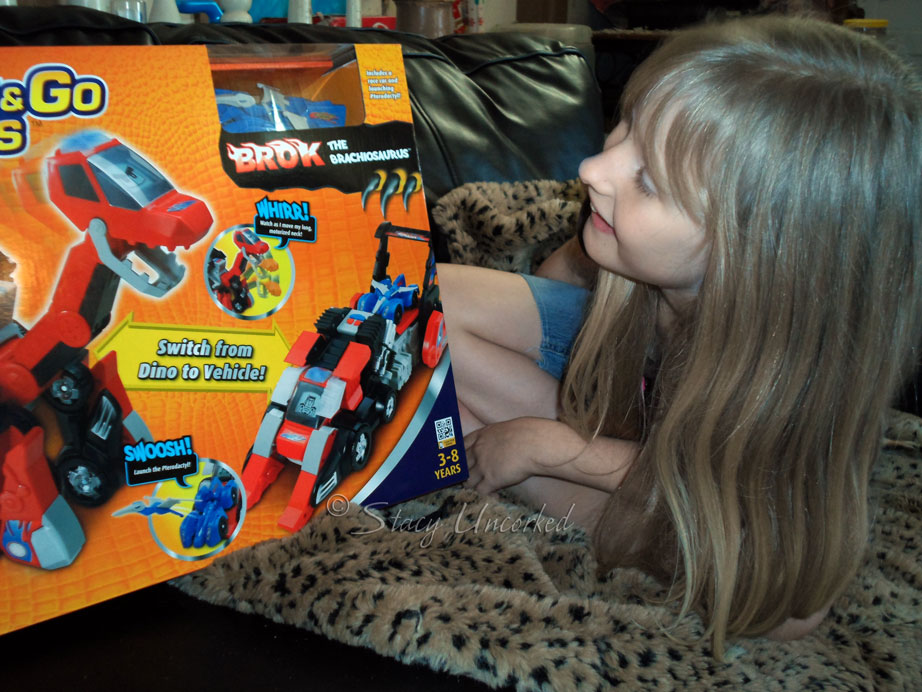 And Attila the Ankylosaurus ™: 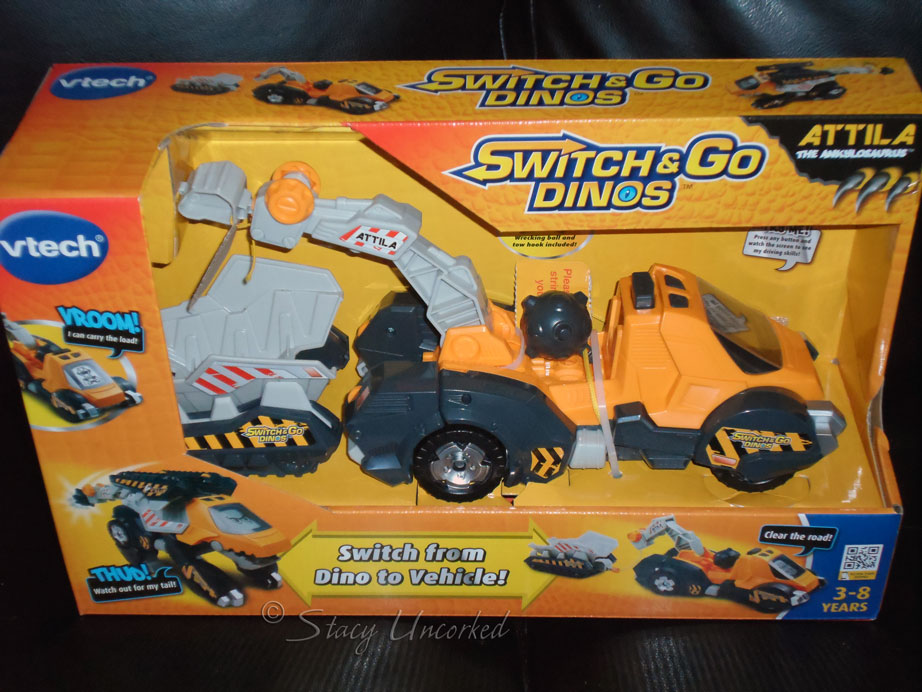 When UPS dropped off the giant box, we were just getting ready to head out to do the grocery shopping.  So naturally while we were out, we had to check and see if the Switch & Go Dinos were available locally.  They were.  And yes, Princess Nagger talked me into buying her one more, Span the Spinosaurus ™: 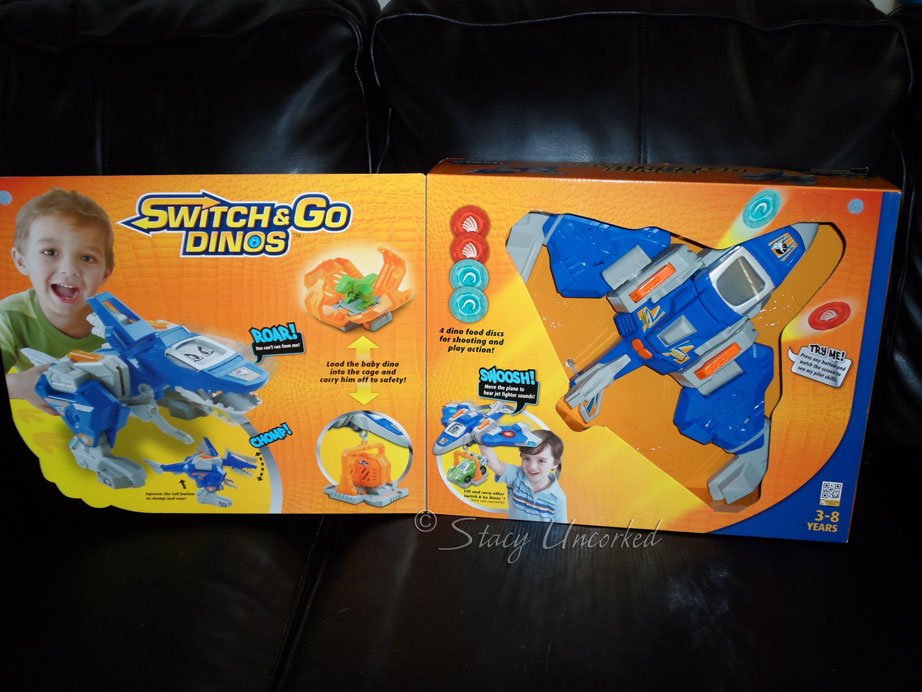 It didn’t take her much to talk me into buying that one – a combo plane and dinosaur?  Way cool.  When we got home, she couldn’t wait to break everyone out of their cardboard prisons (a note to parents who might decide to get these for Christmas presents – it’s going to take a while to get them out of the packaging, you practically have to destroy the box to get them out, and be sure to have lots of patience and wire cutters on hand, because they’re all zip-tied in securely).

Once we freed them from the cardboard and zip ties, Princess Nagger had a blast: 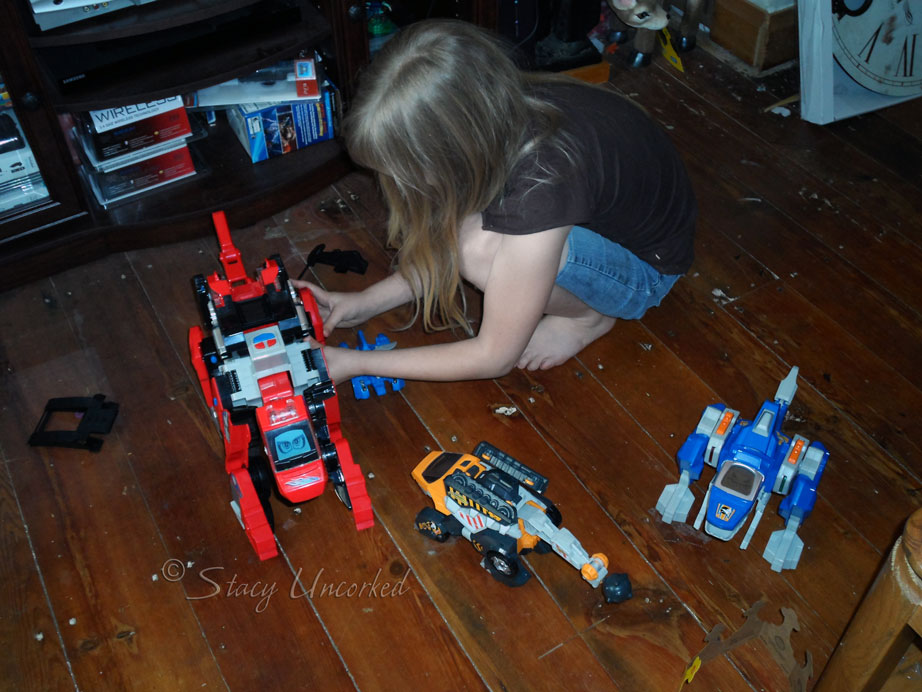 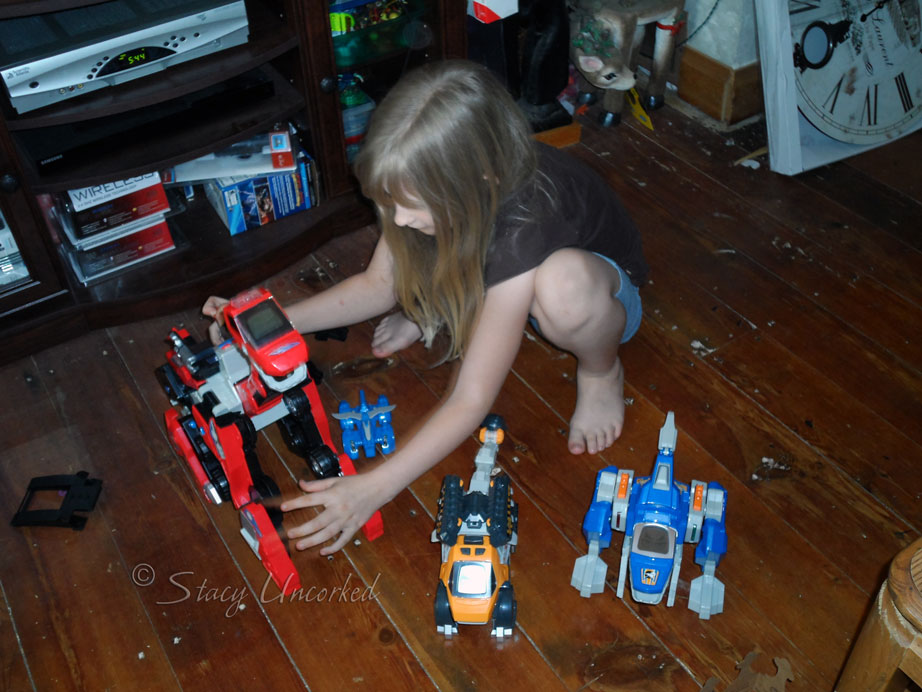 Princess Nagger played with them for hours and had fun making them all make noise simultaneously.  I have a little bone to pick, though – all the advertisements I’ve seen on these toys are geared towards boys, but girls like dinosaurs and vehicles, too.  Just sayin’. 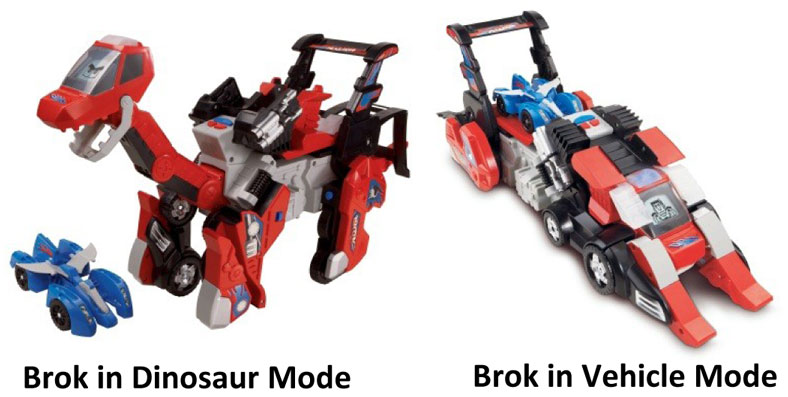 Easygoing and rugged, with the personality to reflect it, Brok the Brachiosaurus is the ultimate dinosaur vehicle.

Equipped with a motorized neck and legs that move up and down while rolling across the floor, Brok the Brachiosaurus is pretty easygoing, but don’t get on his bad side. With the press of the action button, Brok will make dramatic dinosaur sounds, and say more than 40 phrases like, “I’m large and in charge” or an educational fact, including, “The name Brachiosaurus means arm-lizard.” Boys (and girls) can customize Brok by selecting from six animated dinosaur faces on the LCD screen.

Within 6-7 simple steps, Brok easily transforms into a vehicle. In this form, Brok can interact with other Switch & Go dinosaur vehicles, as he serves as a car carrier equipped with a launch pad to send vehicles flying. Brok also comes with an included smaller race car that launches a flying dinosaur when sent down his ramp. In this mode, Brok makes vehicle sounds, and says up to 30 expressions like, “Keep on truckin’,”and, “Saddle up partner,” among others. Six animated driver faces are available for customization.

Next let’s meet Attila the Ankylosaurus ™: The dino who never backs down from a fight, Attila the Ankylosaurus can get you out of any jam.

In the dinosaur mode Attila comes equipped with a tail that swings back and forth with the press of a button, and can be heard making dramatic dinosaur sounds and sharing 30 fun expressions, like, “I’m an herbivore. I chow down on plants” and, “I’m built like a tank with armor all over my head, back, and sides.” Boys (and girls) can customize Attila by selecting from four animated dinosaur faces on the LCD screen.

In 5-6 steps, Attila transforms into a construction vehicle complete with a movable crane. Included are two accessories that plug into the crane: a wrecking ball and a tow hook. An accessory truck is also provided, which doubles as spikes and armor in dinosaur mode. These accessories, together with Attila the construction vehicle, create a realistic construction set for boys (and girls). In vehicle mode, Attila makes several sounds and yells up to 30 phrases, like, “I’m a one man wrecking machine,” and, “Yahoo!” Boys (and girls) can customize the driver in the Attila vehicle by choosing from four animated faces.

And finally, let’s meet the extra one Princess Nagger nagged me into buying, Meet Span the Spinosaurus ™: 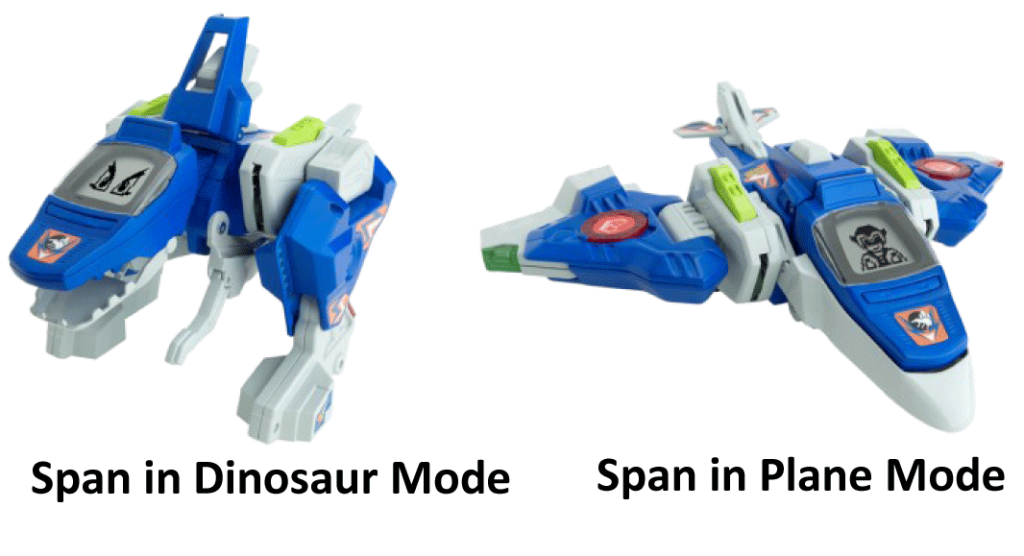 In dinosaur mode, Span lurches forward with the press of a button on his tail. He comes equipped with a crane and rescue cage for other Switch & Go Dinos, as well as a small dinosaur that is included. By pressing action buttons, Span will teach kids about himself, saying up to 30 expressions like, “Hi, they call me spinelizard because of the long spines on my back.” He’ll even share jokes like, “What’s up – I’m Span the Spinosaurus. Nice to eat you. Er, I mean, meet you. Heh, heh.” Boys (and girls) can customize Span by selecting from four animated dinosaur faces on the LCD screen.

It’s time for takeoff – Span the Spinosaurus provides double the fun when he transforms from a dinosaur to a plane. The plane is equipped with sensors to detect movement and respond with exciting flying sound effects. Kids can practice landing with the included landing gear, and have fun with launchers that send out discs of food. As a plane, Span can be heard shouting up to 30 phrases like, “I’m faster than the speed of sound” among other fun facts and vehicle sounds. Kids can select from four animated driver faces to customize their experience.

There are also four starter Dinos available for purchase on VTechkids.com: Sliver the T-Rex, T-Don the Pteranodon, Tonn the Stegosaurus and Horns the Triceratops: 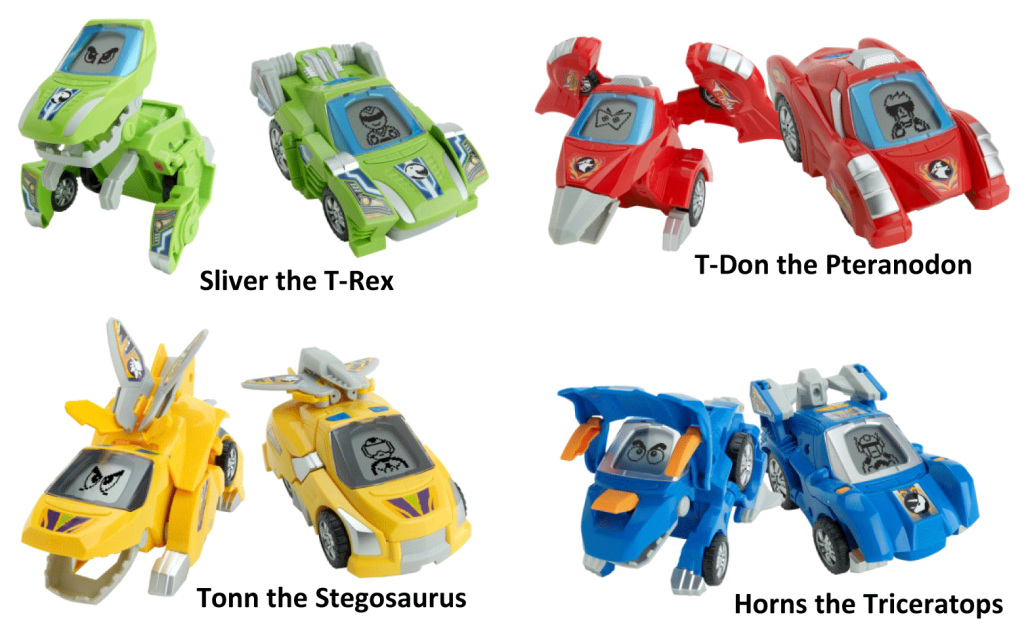 Princess Nagger now wants to collect them all, starting with T-Don the Pteranodon.

What I love about VTech’s new Switch & Go Dinos, is they get the kids using their brain and their imagination – these are absolutely perfect for that.  They are geared for children ages 3 to 8 years old, but I’m here to tell you that even a 9 year old future Paleontologist has lots of fun with these – and wants to get the rest of them to have a complete set.  She’s added them to her birthday and Christmas list already.

VTech is also having something really cool going on right now, too – it’s called the VTech’s Show & Tell with Switch & Go Contest they’re running on their Facebook page:

Switch & Go Dinos are all about TRANSFORMING kids’ imaginations, and we’re excited to give kids the opportunity with the Show & Tell with Switch & Go Video Contest. We want your kids to use their imaginations to see what cars and dinosaurs they would combine. Your kid can win a kids’ lifetime supply of toys, your video on Nickelodeon and a viewing party with your friends and family.

From August 22 through October 1, visit: https://www.facebook.com/vtechtoys/ to enter.

Princess Nagger is working on creating something really unique for the contest even as I type this.  I’ll be sure to share her video with you as soon as it’s done – hopefully before October 1st, heh.

The entire Switch & Go Dinos line – including Sliver the T-Rex, T-Don the Pteranodon, Tonn the Stegosaurus and Horns the Triceratops (SRP: $15.99), and Brok the Brachiosaurus (SRP: $49.99), Span the Spinosaurus (SRP: $29.99) and Attila the Ankylosaurus (SRP: $24.99) – is now available at www.VTechKids.com and on-shelf at all major retailers. (I found most of them – including Span – at Walmart last week).

As of right now there are only 92 days until Christmas (in two-ish hours there will only be 91 days) – it’ll be here before you know it. I have a feeling this just might be on the Hot List for Christmas this year – so if you’re going to gift one to a deserving child in your life, you might want to get one sooner rather than later.

I participated in a campaign on behalf of Mom Central Consulting for VTech, and received VTech Switch & Go Dinos product samples to facilitate my review, and even purchased an extra one just because they’re cool. No monetary compensation was received implied or otherwise. All opinions are mine (and Princess Nagger, of course) and not influenced by outside sources. See my Disclosure Policy here.