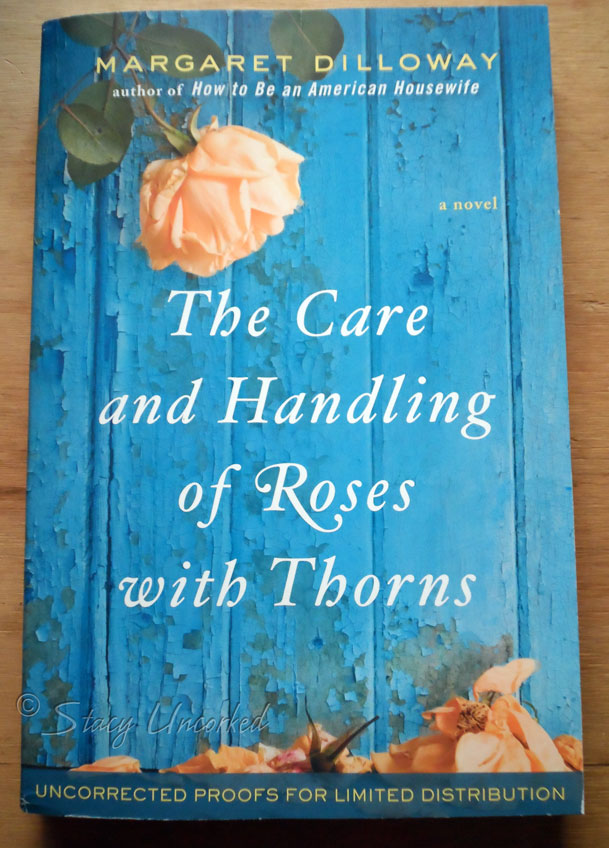 When asked to review The Care and Handling of Roses with Thorns, I knew I would most likely enjoy it, considering the author, Margaret Dilloway, happens to be the very same author who penned How to be an American Housewife.  It started out on the slow side for me with excessive details about the breeding of roses (though I was fascinated at points, because I tend to do the same detail care for my grape vines).

Some may think too much time is also spent on the details of Galilee’s (Gal) kidney disease, but this part also fascinated me because it was eerily similar to an old friend of mine who recently passed away from the same disease after her third kidney transplant.  If my late friend had been interested in breeding roses with dreams of creating a prize-winning rose, I would think this character was actually her.

Once I got through what I would describe as ‘technical writing’, I became completely immersed in the storyline.  Gal was very much like her roses – a little prickly at times, but beautiful and vulnerable just the same.  She is (appropriately) a biology teacher at a private school who doesn’t put up with slackers. She’s a no-nonsense teacher, doesn’t allow extra-credit or the retaking of failed tests.  I had a teacher like that in high school – pass or fail.

Teaching is her job, but roses are her passion.  That’s like my hubby – teaching is his job, but music is his passion.  I love how so many of the characters in this book I could relate to characters – I mean people – in my life.

Because Gal spent a majority of her childhood in the hospital battling her kidney disease (and in adulthood on a strict schedule due to dialysis treatments every-other-day) she has little patience for her fly-by-night drug/alcohol dependent older sister, Becky.  Gal’s strictly scheduled life is turned upside down when her sister travels to Hong Kong for work, sending her 15-year old daughter Riley, to Gal’s school for the free tuition and to live with Gal during the school year.

Having this unexpected ‘visitor’ invade Gal’s normal routine starts off rocky at first – picture a 36 year old fiercely independent set-in-her-ways aunt trying to navigate the stormy mode – and mood swings – of a 15 year old girl.  After not having seen Riley for years, it takes awhile for the two of them to connect – but in the process it also forces Gal to re-examine her relationship with her sister, Riley’s mother Becky.

It also makes her take a long hard look at her reclusive life, not getting ‘attached’ to other people or making solid friendships, aside from her eccentric friend, Dara. Riley’s presence in Gal’s life allows her to shed the thorns and bloom like one of her beautiful roses.  By the same token, Gal’s presence in Riley’s life turns her from a sullen teenager to a caring and considerate one.  By the end of the book Gal has even taken down enough walls that she allows a romance to begin to bloom.

Margaret Dilloway brings her characters to life yet again – if you’re looking for a good book to read, look no further.  Feel free to stop by and check out the discussion that’s going on now at the BlogHer Book Club: Why I Was Scared of Red Roses.  The book will be released on August 2nd.

What are you reading?

Note:  This is a paid review for BlogHer Book Club on behalf of Margaret Dilloway and Putnam Books.  The opinions expressed are my own and not influenced by outside sources.  You can see my disclosure policy here.