Recently I had the honor of viewing an exclusive online premier of Mighty Fine.  The film, based on writer/director Debbie Goodstein’s childhood experiences, touches upon the controversial and difficult roles that anger and aggression can play in a family. 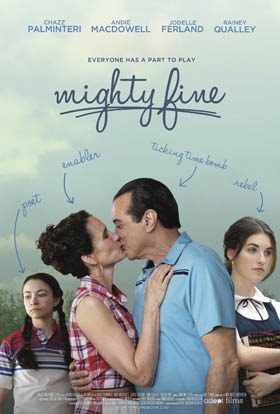 Mighty Fine tells the story of a 1970’s family, who move from Brooklyn to New Orleans in search of a better, more prosperous life. The movie paints the picture of Joe Fine’s (Chazz Palminteri) love for his wife (Andie MacDowell) and daughters (Jodelle Ferland and Rainey Qualley), juxtaposed against his explosive, rage-filled side, which he often takes out on those closest to him.

The emotional abuse leaves Stella, Maddie, and Natalie conflicted between their love for this charismatic, generous man, and their vulnerability in the face of his unpredictable mood swings.

In the beginning, Joe appears to be a generous and loving husband and father.  As the movie progresses, Joe’s temperament and his anger problem start to be revealed.  His anger fuels conflict in his family, exacerbating the communication problems and power struggles with his teen daughters.

If you’ve ever known anyone with angry/abusive behavior, you’ll recognize the polar opposite mode of him trying to make up for his angry outbursts by spending money and giving his family elaborate gifts.

I have to admit that it was a little difficult for me to watch, as I was previously married to someone who was exactly like Joe.  It did, however, make me realize how lucky I am that I was strong enough not to put up with the abuse and erratic behavior, and leave before I felt ‘stuck’.  I knew if I stayed, I would have lost myself (or my life), and if we had ever had kids together, they would feel his wrath, too.  So I guess you could say not only was I looking out for myself, but for my future children as well.

There has been a conspiracy of silence among people who have experienced emotional abuse.  I myself was guilty of that when I was married to the abusive ex-husband.  No one had a clue until after I had left – and in some cases, not until years later – what I had actually gone through behind closed doors.  It’s true that many families cover up the fact they have hostile home environments.

It’s not fun having to live life walking on eggshells – particularly around someone who’s supposed to love you – due to flaming tempers and abrasive personalities.  So many people and families go through their day-to-day routines pretending to ignore the tension in the household. I know I sure did.

The film, Mighty Fine, premiering in select cities May 25th, explores The Fine family dynamic and how the effects of an explosive parent can ripple through a family.  The film strikes a chord among those who’ve experienced the often incomprehensible behavior of an abusive parent. It also makes the connection between economic uncertainty and its impact on people whose mental health is already precarious.

Check out this movie trailer:

I highly recommend seeing it – Chazz Palminteri gives the performance of a lifetime that will mesmerize and haunt viewers.

I participated in a campaign on behalf of Mom Central Consulting for Mighty Fine and the distributor. I received access to an online showing of the film and a promotional item to thank me for participating.  All opinions are my own and not influenced by outside sources.  You can see my disclosure policy here.