You know how Princess Nagger and I have been annoyed with Mother Nature for the hot/cold/hot/cold mode she’s been working on for the past few months, along with the boomerang colds that have come along for the weather ride?  Well, Princess Nagger is really mad at Mother Nature, especially since the recent bout of cold-mode gave her an ear infection, which then turned into a ruptured eardrum.  Ouch.

Sunday night poor Princess Nagger was having trouble getting to sleep because of pain in her ear – nothing I gave her seemed to be working.  So as any good mother would do, I dialed up Dr. Googlestein (thank you, Jen, for that), to see what kind of remedies I could impart on her so she (and I) could get some sleep.  Pretty much what I’d already done was not working – the homeopathic ear drops we had from the last time she had an ear infection, and the fact that she seems to be immune to Tylenol products like I am, the poor kid was still in excruciating pain.  And being vocally loud about it.

So since Dr. Googledork wasn’t giving me any alternate answers (aside from the suggestion of putting 10 drops of hydrogen peroxide in her ear to kill the germs – which I did, which didn’t bring the promised relief) I decided to call an expert in the field of ear infections.  Luckily my favorite aunt is on the West Coast, so a midnight call to her wasn’t too late.  If anyone would be an expert on ear infections, it’d be my aunt, who’s had 8 ruptured eardrums in her lifetime.  So take that, Dr. Googletwerp.

She recommended a hot washcloth compress (which the interwebs also mentioned) but in addition to that, a heating pad.  Only I have no idea where my heating pad is, or if it even works any more, so she suggested a sock with rice in it, heated up in the microwave.  Gives the phrase “put a sock in it” a whole new meaning.

Since I figured size matters in this case, I borrowed one of the hubby’s clean socks and filled it with the only rice I have – Jasmine rice.  I have to tell you, the aromatic nature of Jasmine rice is usually heavenly, except when you mix it with Bounty fresh fabric softened socks.  I’m just sayin’.

I brought it up to Princess Nagger’s room with the hot washcloth and encouraged her to lay on it with her ear.  She was finally asleep in less than 10 minutes.  I stayed with her to monitor her, so of course I didn’t get much restful sleep.  But that’s OK.  It’s the sacrifices we make as a mom, right?

When I got up yesterday morning I noticed she was still feverish so I let her sleep while I did my other mom-ly duties by calling in sick for her at her school, then calling the doctor’s office to see if she could be seen.  Luckily he had an opening mid-morning, so that gave Princess Nagger a little extra time to sleep.  I knew without a doubt her eardrum had burst overnight, the icky gooey evidence of it was stuck in her hair.

At least that meant she got to stay home from school yesterday which made her happy (with ‘happy’ being loosely used considering the pain she was in.  And since her awesome Pediatrician was able to see her, we got a doctor’s note so no Truant Officers will need to be called).

It was also the hubby’s birthday yesterday, and as luck would have it, he took yesterday and today off from work.  He got to spend the better part of his birthday morning hanging out with Little Dude while I took Princess Nagger to see the doctor – which made me happy.  Not the doctor part, the part about not having to drag a 4-year old along for the ride.  A visit to the doctor’s office is bad enough when one kid is lethargically sick, but add a hyperactive and boisterous 4-year old to the mix, even less fun.

My Aunt Susie will be happy to know that the doctor agreed with her remedies – especially the rice-sock-hot-washcloth-compress.  So if any of you have a favorite aunt, make sure you give them a midnight call when you’re in a bind and need advice.  Just tell them Aunt Susie told you to call at that hour.  That’ll work.

After we got home Princess Nagger pretty much spent the remainder of the day dozing on the couch while having iCarly play in the background: 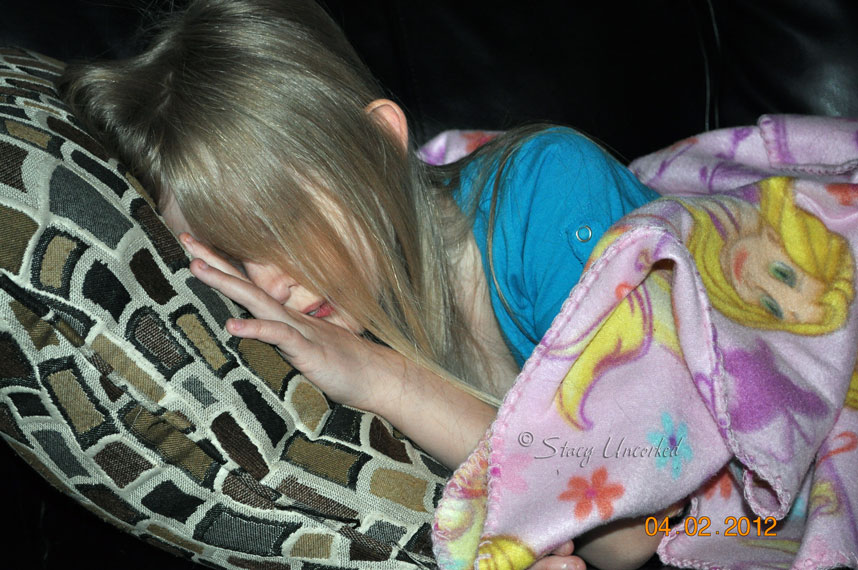 After some rest and a dose of her antibiotics and children’s ibuprofen to combat the aches and fever, she was feeling better.  She was starting to act like her old self when she spotted a funny sticker on one of the bananas in the bunch and followed its instructions: 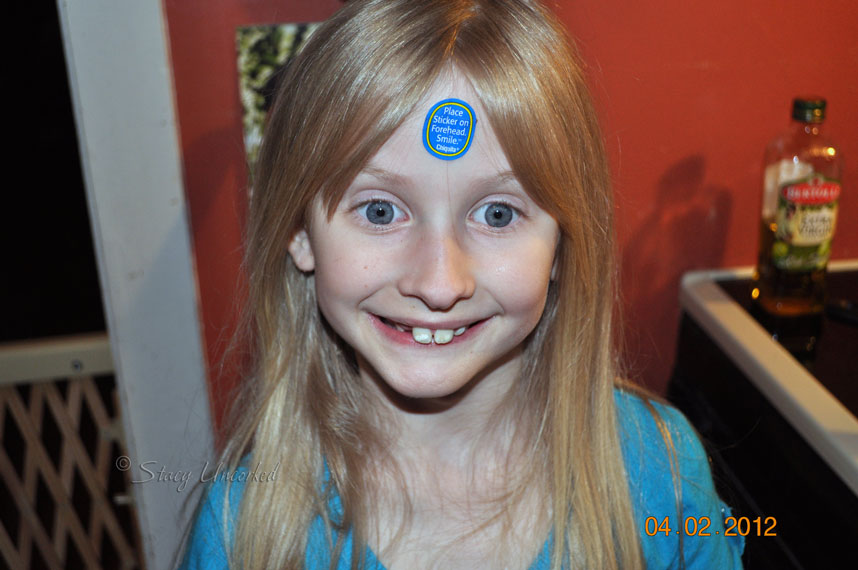 In case you can’t quite read what it says, it reads: “Place Sticker on Forehead. Smile”.  So she did.  She also got goofy about it: 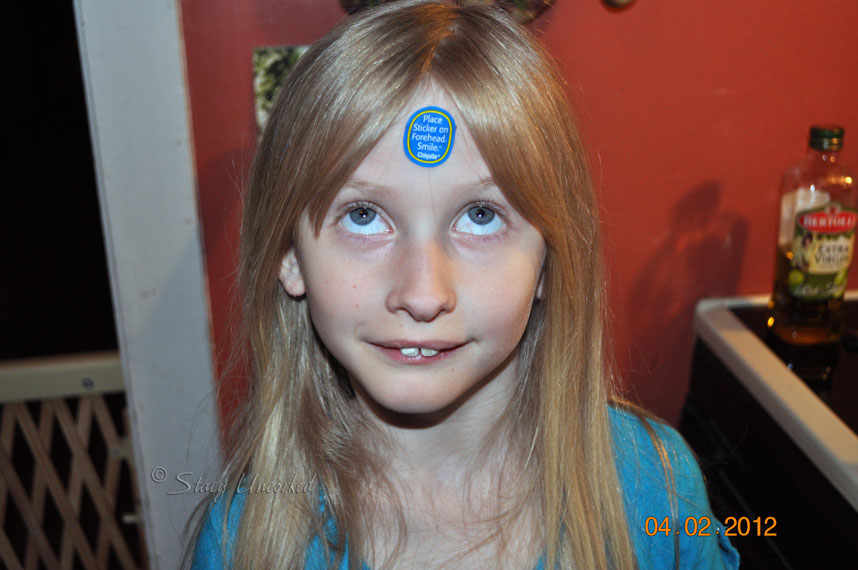 It’s so nice to have her feeling better and back to her old self again – the weekend long cling-on followed by wailing and gnashing of teeth is now just a faint memory.

While it wasn’t all that random, that’s going to do it for this week – feel free to link up and hop around to all the other awesome randomizers – bet they’ll be more random in their entertaining. If you’re visiting from Talk To Us Tuesday, feel free to link up, too – the more the merrier. Rebel On!

29 thoughts on “Princess Nagger and the Ruptured Eardrum”