I’ve mentioned now and again that I have a head of Hella Hair.  While I curse it on some days, other days I feel very blessed to have the head’o’hair that I do – in fact, it’s one of my best assets, at least most of the time.

My parents gifted us kids in the gene pool with heads of very thick hair – each of us have enough hair for two or three people.  It’s a blessing and a curse – it took me all of the 13 years living here in Pennsylvania to find a hairdresser that could actually manage my hair.

I’m able to leave her salon and not wear a hat or race home to ‘fix’ it before showing my face in public. And I don’t look like I got my hair caught in a lawn mower.  Oh yes, that’s happened.  Well, not the actual lawn mower part, but the way my hair looked after it had been butchered by different hairdressers that couldn’t figure out how to cut and style my thick tresses.

I was going to see if I could find some pictures of when I used to have a spiral perm, but the box of photo albums was cleverly buried in the shed by my hubby, so I wasn’t able to locate it….. yet.  I’ll definitely have to find it soon so you can have a good chuckle over some of my previous antics.

Meanwhile, one of my friends posted some pictures on her Facebook page that show one of the bad haircuts I had gotten at a beauty school – I had asked to add a few more bangs to the wispy ones I had, and she cut it into a bi-level.  Which is pretty much a female mullet: 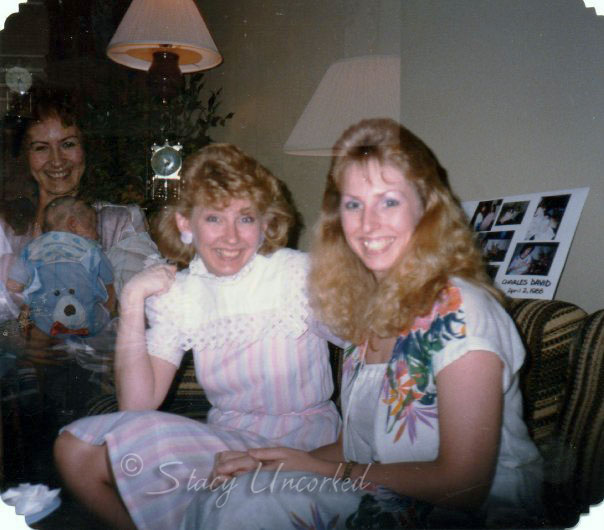 Notice the double exposure going on - I have no idea who the gal on the far left is, she wasn't in the original shot. I'm on the far right, my sister Kimn is grinning next to me.

Trying to grow out my ‘mullet’ was not an easy thing to do, this is when it was in the ‘growing out’ stages: 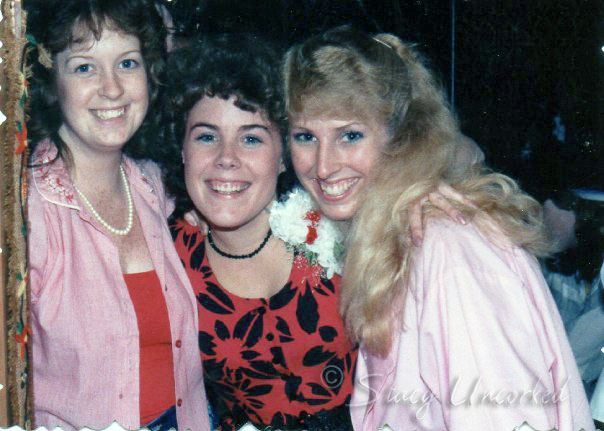 Friends Colleen and Ronna, then me on the right

Since my hair is naturally curly, I like to wear it long because the weight pulls out a lot of the curl…except when it gets wet, then it gets curly again and the frizz happens.  I’m not crazy about the frizz.  That’s why for a number of years I would get a spiral perm, because then I could actually let my hair air-dry and have it look halfway decent.  If I put my hair in a pony tail while wet, the part held in place by the pony tail tie is still wet at the end of the day.  No matter how hot the day is.

After I decided I was done frying my hair with perms, I switched to different fry-tactics: blow-drying my hair as straight as I could, then curling it with a curling iron.  At least the curling iron would then tame my hair as much as possible – I was always envious of those who had a head of hair that all they had to do was wash and do a quick blow-dry, or let it air dry and it looked perfect.  I have to put a lot of work into mine to get it to look normal, let alone halfway decent.

Luckily I have finally found a hairdresser comparable to the one I had for years when I lived in Seattle.  My new hairdresser here in PA is a Godsend.  She herself has thick hair, and knows how to deal with it.  Now I’m able to have it cut in layers (that don’t look like a lawn mower attacked) which gives me the option of scrunching it after my shower and letting it air dry.  It only looks good that first day, though, after I sleep on it all bets are off and it’s wild and crazy.  So most of the time I’ll let it partially air dry, then finish blow drying it out to get it as straight as possible: 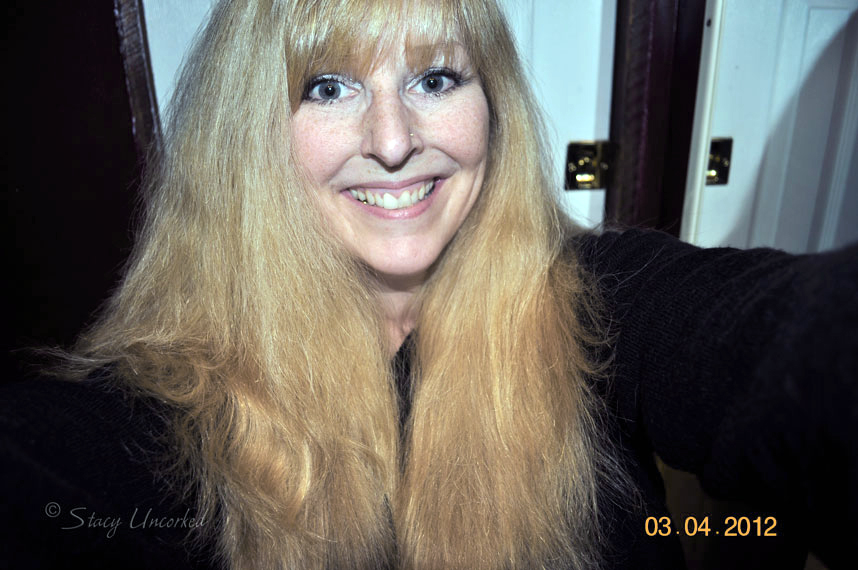 That’s about half my hair, I couldn’t pull it all to the front to take the picture (note to self: next time use your remote shutter, or at least a tripod since your arms just aren’t quite long enough).  Notice some of the residual curl?  I forgot to take a picture of it when it was wet, to show you how much curl there actually is.  One of these days I’ll do that for you.  Here’s a sort of side shot to give you an idea of the thickness: 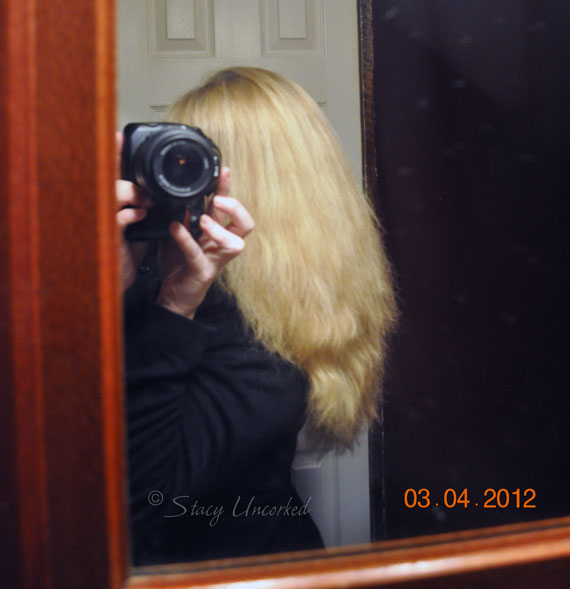 See why I can’t just blow dry it and go?  Funky looking.  But now it’s ready for the attack of the flat iron or curling iron.  Lately I’ve pretty much been going all flat-iron since the alternate days I’ll go with the natural curl.  Here it is freshly flat-ironed: 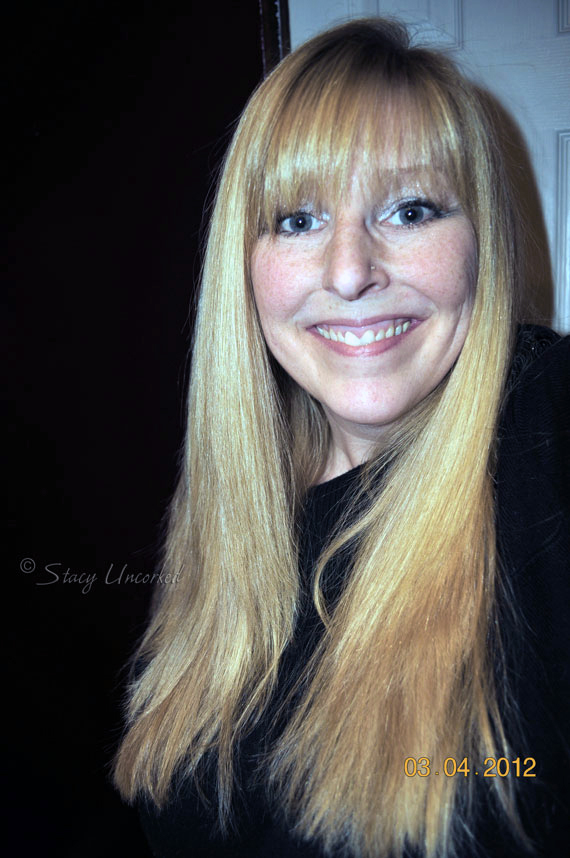 Here’s a shot of the back – I obviously missed a section at the crown of my head, and didn’t do a thorough job on the layers with the flat-iron, but on a warm day it gets too hot to finish: 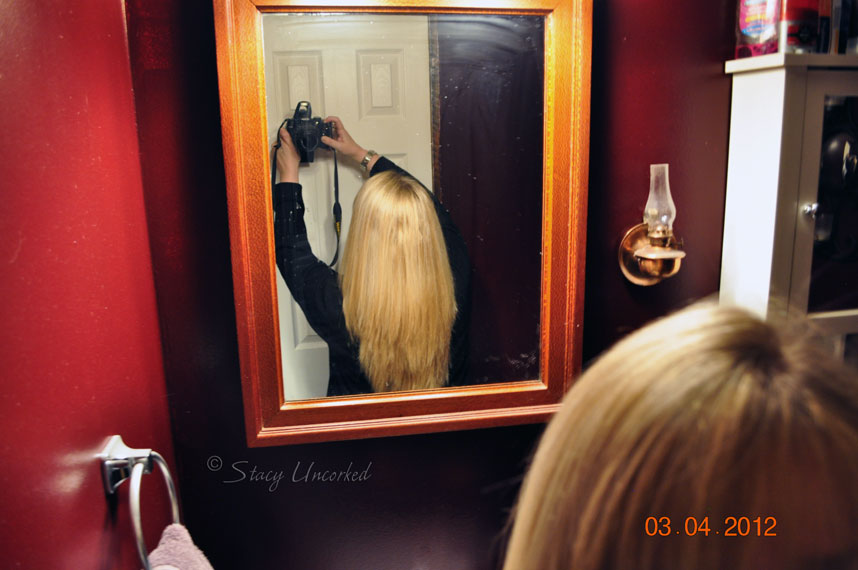 Sorry about the smudgy mirror – the hubby cleaned it.  ‘Nuff said.  See those layers?  When I curl it they really look cool.  They actually do blend a bit better when I spend more time with the flat iron, but I was in a hurry since I had locked myself in the powder room to take pictures.  I do spend a bit more focused time on the front and sides, because they’re easier to reach: 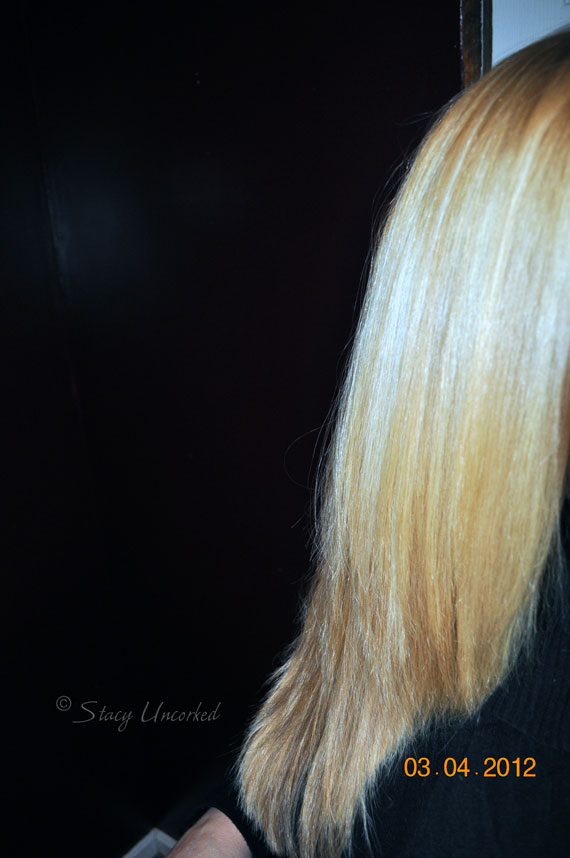 I have naturally dry hair, so I do not wash it every day.  I thought I was just being lazy, but apparently it’s healthier for your hair.  Who would have thought?  And for some reason, on most days my hair looks and/or handles better the day after I’ve shampooed and conditioned it – it’s like it calms down.  Unless it’s hot and humid (or raining) – then there’s no taming the wild beast because it tends to have a mind of its own, so I’ll stick it in a pony tail to keep it under control.

You know how you always wish you have the opposite of what you have?  Growing up and being a blonde, I always wished I had super straight, super jet black hair (you know, like Lois Lane in the Superman comics – with the blueish highlights).  I may call it Hella Hair, but I truly feel blessed to have the head’o’hair that I do.  It may be a lot of work, and I always have to get up much earlier than most to ‘deal’ with it, but it’s worth it.

Is your hair naturally straight or naturally curly?  Do you wear it short or long?

This Hairy Spin Cycle was brought to you in part by Gretchen, who has graciously taken up the duties of hostessing the Spin Cycle, and who is the awesomeness of Second Blooming.  Stop by and check out the other Spinners and see what Hairy tales they’re spinning.

30 thoughts on “Spinning Up Some Hella Hair”