We’re halfway through January – how’s the New Year treating you so far?

It’s Monday and you know that that means – fun music to start the week off right.  This week’s theme is songs from your wedding or your wedding year, or songs from when you were 21.  Let’s go with wedding, shall we?

But first let’s give you a little background.  Hubby and I are pretty unconventional.  When I met him, he was a confirmed bachelor and had no intention of ever getting married – until he met me, that is.  By our second year of dating, we were already talking about planning a wedding during Y2K, provided the world didn’t come to an end on New Year’s Eve.

As with any relationship, life happens – and in our case a ne’er do well who liked to interfere, so we put the brakes on the whole marriage thing.  We made it through the rough times and our marriage talk resumed.  He even gave me a ring setting (sans the diamond) for Valentine’s Day 2000.

We took our first ‘real’ vacation to Punta Cana in May 2002, and even looked into getting married there.  Those plans were abandoned when we realized there was so much red tape for getting married in a foreign country, so we decided we’ll just go have fun on the beach and get married in the fall – my favorite season.

During the 4th of July weekend in 2002, he surprised me with a ‘complete’ ring – he had a diamond added to the setting he’d gotten me two years prior.  Two weeks later we discovered I was pregnant with our miracle baby, so we decided to postpone the actual wedding part and get married after she was born – so there would never be a question of having to get married vs. wanting to.

Being as unconventional as we are, we decided to forgo the fanfare and on August 4, 2003 we got married at the Justice of the Peace.  Of course there was some backlash – friends were lamenting the missed opportunity to see my confirmed bachelor actually walk down that aisle.

We started plotting and planning, and decided to have a surprise wedding during our housewarming party scheduled for October 4, 2003.  Pretty cool that the day date was the same as our actual wedding date two months later (though it proved to cause confusion with the hubby later, as he kept thinking our actual anniversary was October 4th and forgot the August 4th date one year).

I made all the bouquets out of silk flowers so they’d be keepsakes, and we borrowed a couple of small event tents and strung lights all over the backyard.  My sister took the photos for me, though in retrospect I suppose I should have rethought doing a whole nighttime wedding.

Our 50+ guests were definitely surprised when they were asked to congregate out in the driveway for the actual surprise – a wedding complete with a minister, bridesmaids and groomsmen: 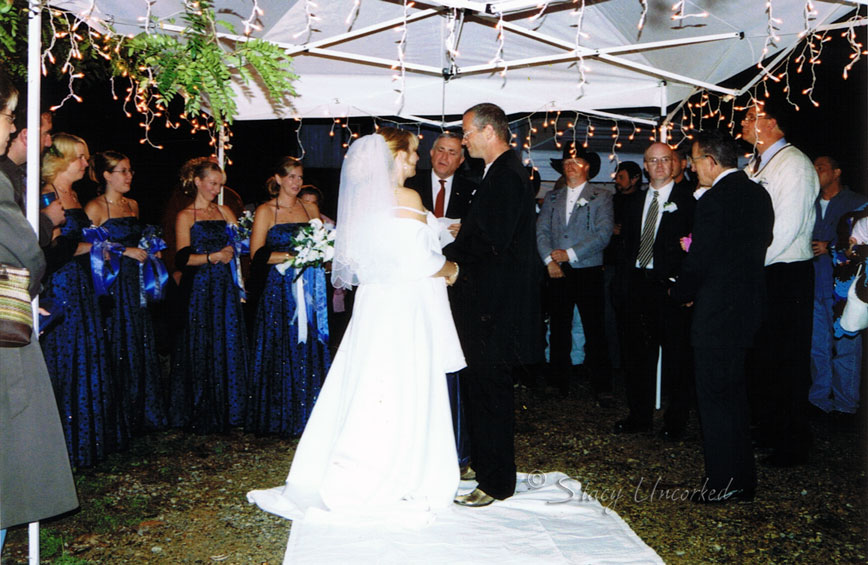 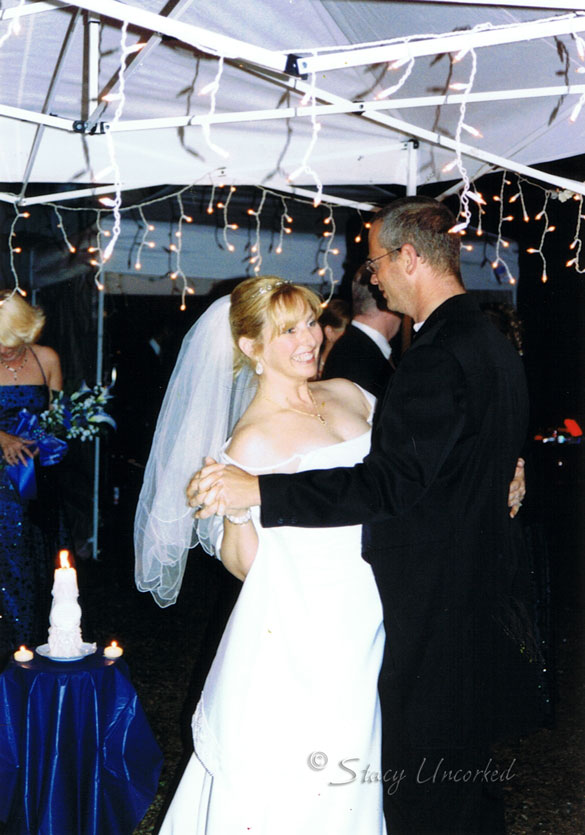 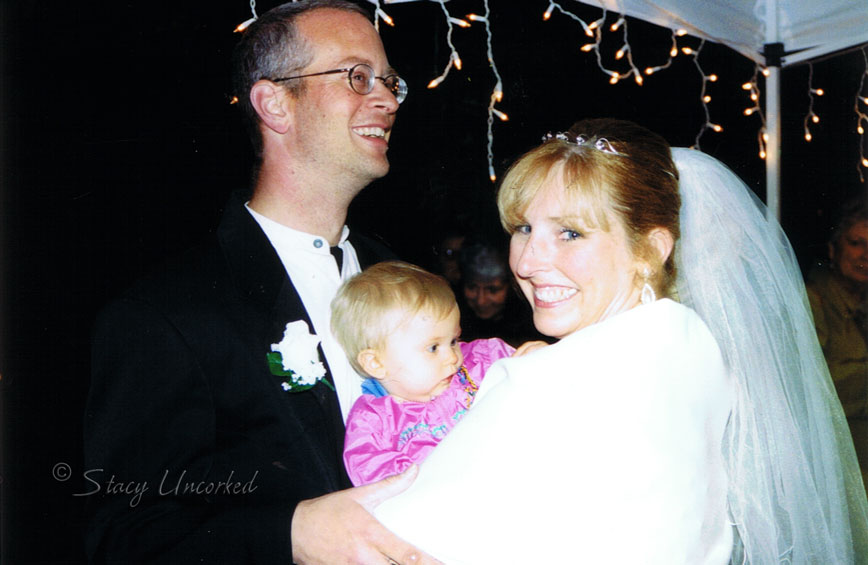 We even had a live band – hubby was part of a Country band during that time, so they set up their equipment in the barn earlier that day, and after the ‘kiss the bride’ moment, opened the barn doors and started playing music: 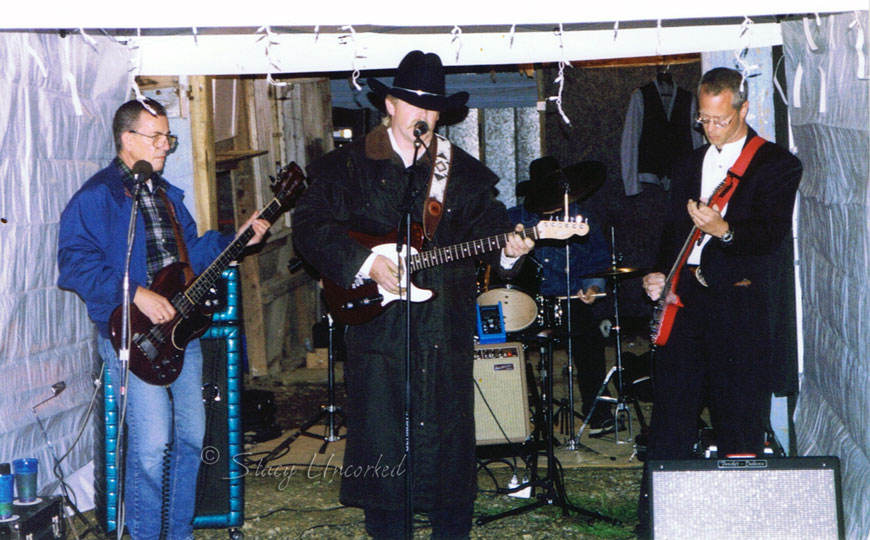 The song I had playing when walking down the sidewalk aisle was appropriate, Shania Twain with 220;You’re Still The One”:

One of the songs the band played is one that I badgered them to play (since it was a song my girlfriends and I always asked the live band to play on our monthly Girls Night Out) Van Morrison’s 220;Brown Eyed Girl”.  Hubby sang lead for this one, and always joked that if it worked, he should change the lyrics to ‘Hazel Eyed Girl” since my eyes aren’t brown.  But I prefer the original (and I wish I had a video of the band actually doing it, but alas, I do not):

Some of my favorite songs were from 2003, like Brad Paisley with 220;Little Moments”:

And of course I can’t leave out this fun one from 2003, Alan Jackson with Jimmy Buffett 220;It’s Five O’Clock Somewhere”:

Wasn’t that fun? What was your favorite song at your wedding? Enjoy your Monday!

I have the supreme honor and privilege of being a co-host with the inimitable Xmas Dolly and her cohorts in crime, Lorie of The Shewbridges of Celebration, Florida, and Callie from JAmericanSpice for Monday’s Music Moves Me – want to join in the fun? It’s easy peasy! Just find a tune that rocks your boat, post it and link up – don’t forget to grab Xmas Dolly…er, um, I mean her button…over at her place here. Check out Xmas Dolly’s sidebar for the random themes we sport each week – and you can always ask for a specific theme of music you like, too. Check out the other music lovahs and let’s jam!

I’m also linking up for what was the Sunday Song Hop and now is Pinning and Singing on the Weekend over at 5 Minutes Just For Me: I’m going to have to get busy pinning, but at least it’s to share music, too: