We’re on the home stretch to Christmas – only 5 days left.  I’m in my last minute frantic mode (aren’t we all?) so I’m going to make this a quickie today.  And I apologize for my lack of hostessing attention, I promise after the holidays you’ll not be able to get rid of me skulking about on your blogs.  That’s either a threat or a promise, however you want to look at it.  Let the random begin!

Saturday we had the rescheduled-rescheduled birthday party for Princess Nagger at Chuck E. Cheese.  Originally we were going to do an Angry Birds party, but she decided that she wanted to do Chuck E. Cheese this year, and Angry Birds next year instead, since so many of her Angry Birds enthusiastic friends weren’t able to attend this close to Christmas.  Run DMT‘s daughters were so awesome sending Princess Nagger Angry Birds decor that they drew themselves – she’s got them stashed in a very safe place to take center stage next year.  This year, it was all about Chuck: 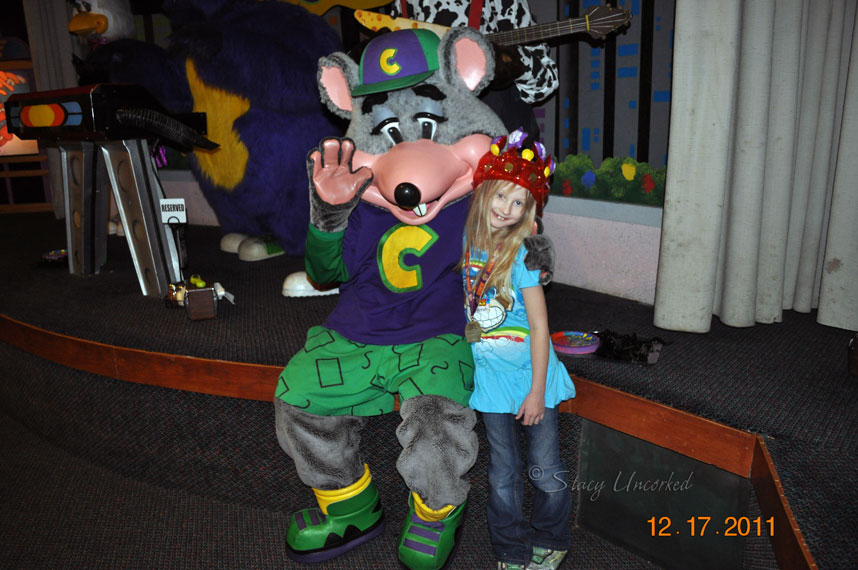 I booked the party at 9:30 Saturday morning – which was awesome, because there were hardly any other people there so the kids had full run of the place.  It was a bit odd, though, eating pizza at 10:30 in the morning, but the kids didn’t seem to mind.  Princes Nagger and I had to do our traditional sketch portrait: 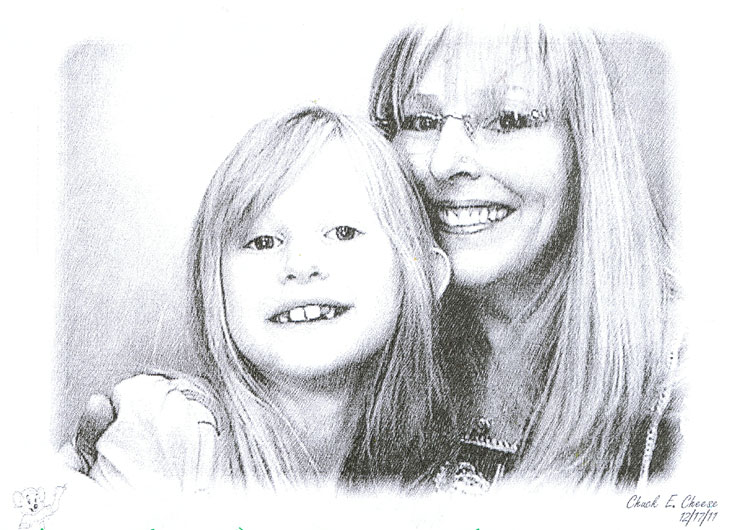 As I’ve been shopping for Princess Nagger, I’ve noticed that all dinosaur related items are geared towards boys.  Why is that, I wonder?  Girl Paleontologists rock, so they really should be inclusive in my opinion.  The reason I mention it is because Princess Nagger recently was teased about her Velociraptor shoes at school by a boy, making fun of the fact that she’s wearing boy shoes.  It’s just not right, and I don’t want some ignorant boy to squelch her passion for dinosaurs and her dream of becoming a Paleontologist some day.

Hubby has a conundrum – he likes to do his Christmas shopping on the 23rd and/or the 24th…Last Minute Joe.  Since we’ll be driving to Iowa on the 23rd, and finishing the drive on the 24th, he’s up a creek since there won’t be time to shop, depending on what time we get to my sister’s house on the 24th.  So he’s having to shop ‘early’.  I buy all the gifts for everyone, my little contribution from my individual income since he pays all the bills from his.  But he likes to buy gifts for me and get a little something extra for the kids each year (so he’s not the only one saying ‘What did we get you?’ as the presents are being unwrapped).  He’s been having to join the fray earlier is all.  My sister joked that he should just wait until the last gas station stop on our way to her house.  Good thing he’s not that kind of shopper.

I know what Santa is getting me though, since I make sure that there are some for both the hubby and I on Christmas morning.  It’s all in the name of keeping the magic alive, or at least showing Princess Nagger that we were good boys and girls too.  One year I forgot to get Santa gifts in the rush that always happens (like now), and didn’t do Santa gifts for me or the hubby.  She was very perturbed that we apparently were bad that year.  She’s brought it up more than once since.

That’s it for this week – thanks for keeping the Random Rebellion alive and kicking.  Here’s hoping you all have a Very Merry Christmas – and Happy Hanukkah to my friends who celebrate.  Feel free to get your random on and link up if you dare. Rebel on!

Hello Tuesday! Last Tuesday of September, first Tuesday of fall! Of course Mother Nature has decided she’s not quite done with summer weather, though, we have a few more days of extra heat before it finally looks like it will … Continue reading →