Exhausted by all that activity yet?

If we were still living in Seattle, it would be even more hectic since my brother and sister’s birthday is 3 days after mine, and my awesome sister-in-law has a birthday just a day before New Year’s Eve.   During all the hectic celebrations, since my family is 3000 miles away I’ll spend an inordinate amount of time on the phone during this time of year (even though I’m not a phone person – but I make an exception to that rule to celebrate long distance).

Of course, trying to juggle the phone between my ear and shoulder, or not missing an incoming call while I’m elbow deep in feast preparations, causes a problem, and invariably means a missed call, and subsequent phone-tag.

Introducing The VTech LS6475-3.  Now parents can enjoy dinner without running to get the phone (caller id announcer lets you know the number calling), decorate for the holidays, bake, and clean while talking to friends and family this holiday season. 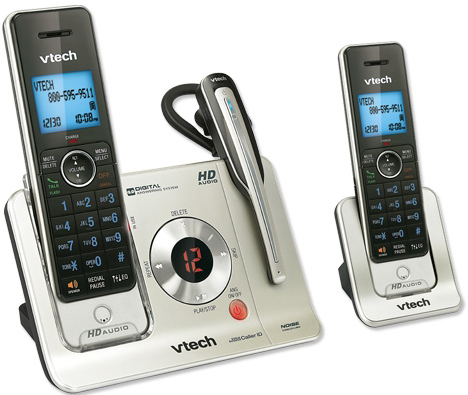 I don’t know about you, but I can’t just sit still and talk on the phone.  Especially when a conversation with any of my relatives can last a very long time (it’s not unheard of for my sister and I to be on the phone for a minimum of an hour-and-a-half).  I want to feel like I’m not being a slacker while enjoying a great conversation, so I’ll be fixing dinner, picking up endless toys, laundry, dishes – anything that needs to be done so it doesn’t look like I didn’t just sit on the phone all day.  Ahem.

The headset you see in the picture above?  Heaven sent.  Now I don’t have to get a crick in my neck or worry about dropping the phone while deep in conversation.  What’s really cool is it comes with three different sized over-the-ear hooks and an over the head band – so you can find out which one fits your ears best.  They also have different sized ear buds – something I always have trouble with, because my ears are small.  But I was able to use a set right out of the box that were actually effective – and comfortable.

Also nice about this phone is you can expand it – up to 12 cordless handsets and 2 cordless headsets.  I was happy to hear that, since our house is fairly large and we utilize the Summer House out back, it’s nice to have extra handsets in various locations – my original phone is a 5-handset phone.  So I’ll definitely be adding some handsets and maybe even one more headset to this system.

A small thing, but one of the things VTech could improve on, is have a voice-mail button for quick access – if we didn’t have voice-mail, it would be a moot point, and we would just use the handy dandy answering machine that is part of this system.  Of course, if we’re in the mood for screening calls, we can have the option of having the answering machine answer the calls in lieu of them going to voice-mail – that way we can pick up the phone if it’s someone we want to talk to.  Or ignore them if it’s an unwanted sales call.

Here are the specs (might be boring to some, but I know I read all the specs when deciding on which phone to buy):

I’m looking forward to putting this through the ultimate test – calling all the members of my family on Thanksgiving while juggling the creation of a feast in the kitchen.  This year I won’t miss a beat.  How do you do phone?  Are you a multi-tasker, or are you one of those that can sit comfortably and just chat?

Note: I wrote this review while participating in a campaign by Mom Central Consulting on behalf VTech, and was the lucky recipient of this awesome phone system to facilitate my review.  All opinions are mine, all mine – not influenced by any outside sources.  At all.   See my Disclosure Policy here.

2 thoughts on “Holiday Phone Calls Made Simple with VTech”