September has arrived, and Mother Nature has finally gotten over her extended hot flash.  What a relief!  Apparently Stormy Lee didn’t think that Hurricane Irene did her job last weekend and has decided that heading straight up our way is his way of making up the difference.

We’ve been inundated with tons of rain already, and are looking at lots and lots more rain the rest of this week.  The kick-start to that was wild and crazy thunder and lightning storms over the weekend.  We were lucky and didn’t lose power with Irene, this time we weren’t so lucky.  At least it was only three hours, but to a three year old and an eight year old, it was terminal.

We went to Princess Nagger’s ‘Welcome Back to School Night’ last week – we were a little worried on how Little Dude would behave, since that boy is constantly on the move and doesn’t seem to have an ‘off’ button.  We had to shush him a few times, and at one point when we did, he whispered 220;I being quiet!  I being quiet!” in a whisper that was so loud it carried across the entire room of other parents.  It did get some giggles going, and I had to try hard not to giggle myself.

Little Dude loves Thomas the Train – something Princess Nagger never got into (in spite of her love of trains and dinosaurs – and Dinosaur Train), so it’s a new chapter for me.  I picked up a Thomas toy for Little Dude while we were out grocery shopping last week – he takes it everywhere he goes: 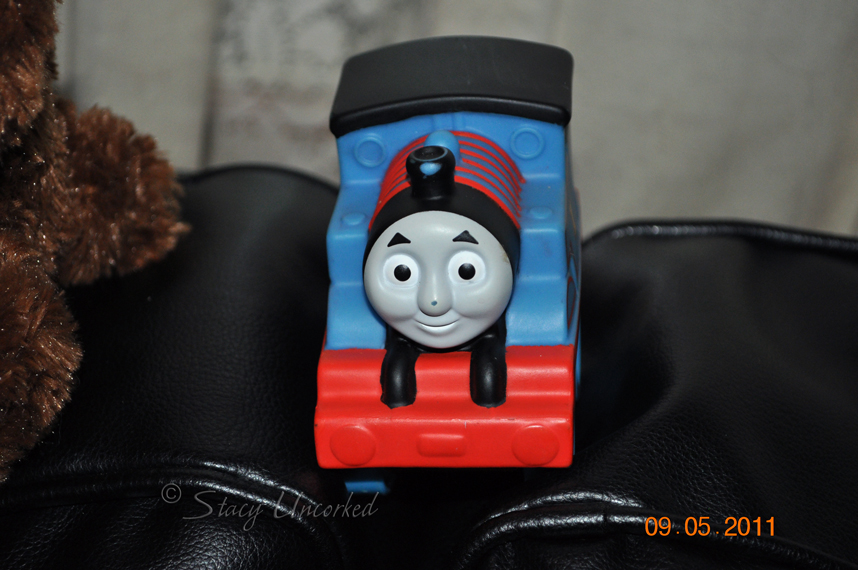 He brought it to the Back to School Night, and then accidentally left it sitting on Princess Nagger’s desk when we left.  He realized about halfway home that he left it there, and started wailing “Go back!! You have to get it!  I need Thomas!”  You’d have thought the whole world was coming to an end.

We couldn’t go back because the school was closed, and since it was his bedtime I tried to weave a tale of how Thomas was going to have so much fun with the other toys, books and various school supplies that night, and would be happily riding on the bus home with Princess Nagger the next day.  He seemed enamored of the story I was creating, but the minute it was time for lights out, the waterworks started again.  And lasted for a full hour before he finally cried himself to sleep.  Poor guy.  Needless to say he was very happy at Thomas’ return the next day – though Princess Nagger apparently got some ribbing from her friends about her carrying a ‘baby’ toy.

Speaking of crying, Princess Nagger had her own hour-long sob-session on Friday night.  Her beloved pet Nigel died on Friday: 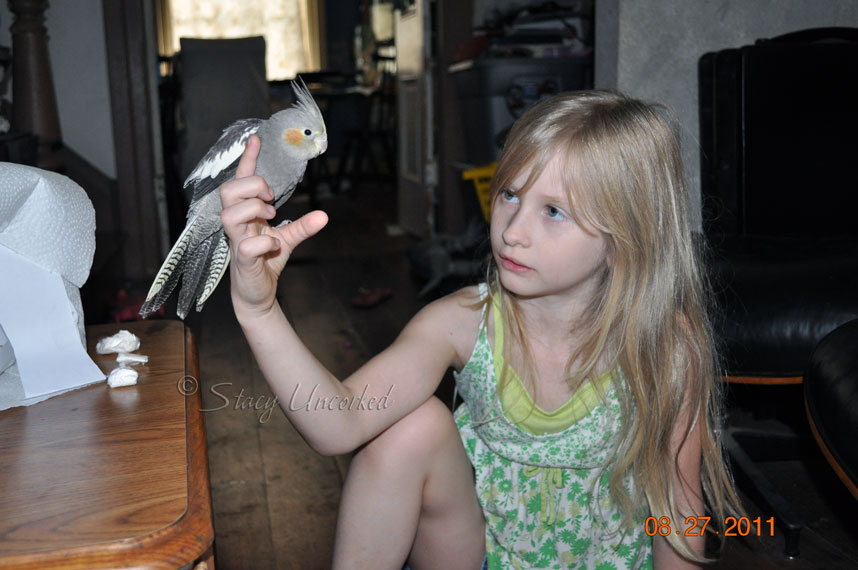 No idea how or why, he didn’t show any signs of being sick or lethargic, and seemed normal when she was playing with him earlier in the day.  She was completely heartbroken, and thought she had done something wrong because she was having him ‘play dead’.  She thought somehow teaching him the ‘play dead’ trick really made him dead.

Hubby buried him out by the flower bed where the cherry trees were (that he cut down), and we’ll be making a trip to the craft store to pick up one of those headstone kits to make him a special little headstone.  It broke my heart having her cry herself to sleep Friday night, I was wishing so much I could take away her pain.

Hubby felt so bad for her, and since she had been doing such a great job taking care of her bird, he took her to a different (and much better) pet store to get a new one.  Meet Nigel 2.0: 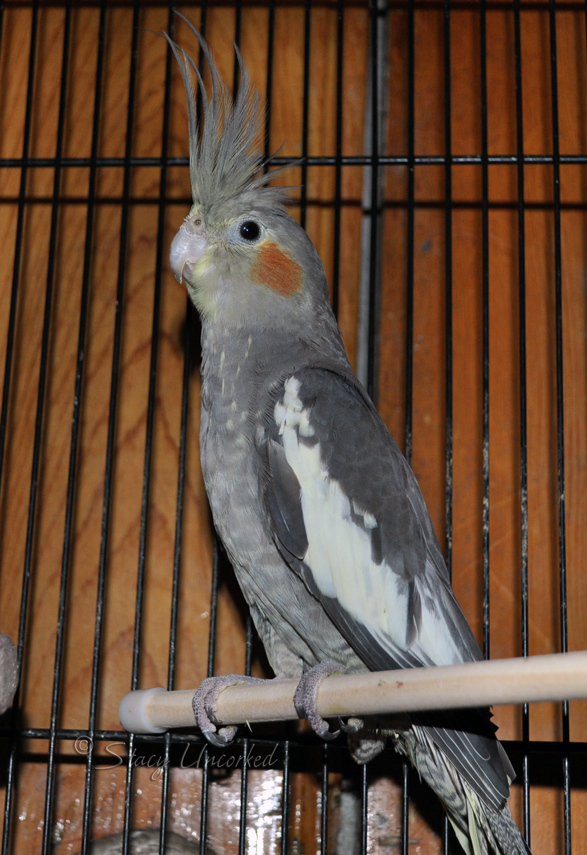 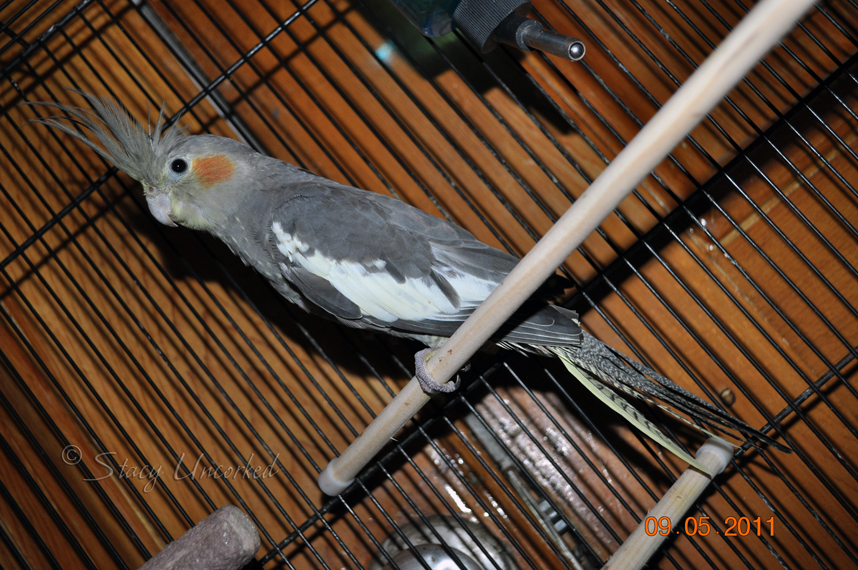 He’s got some crest on him, doesn’t he? 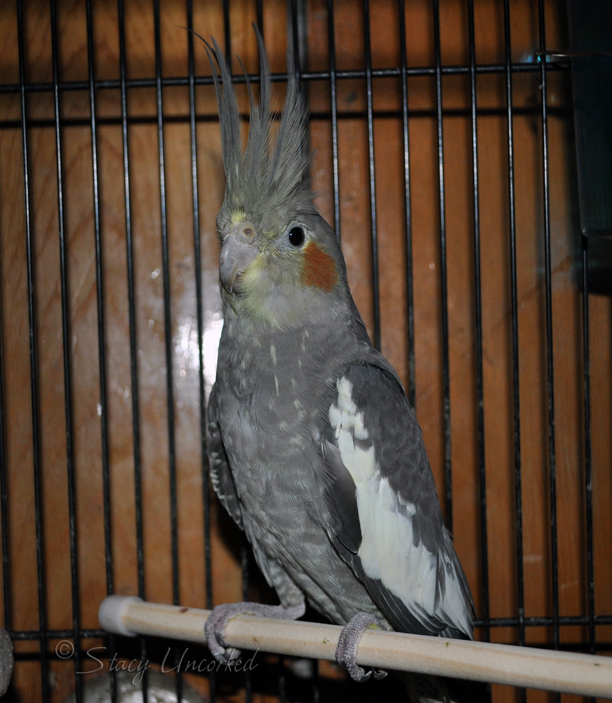 Princess Nagger has already gotten over her grief from Nigel 1.0, and thinks this new one is much better – it’s much feistier, so she hasn’t been able to hold it yet, but that day will come.  And hopefully Nigel 2.0 has a much sturdier constitution than Nigel 1.0 had.

That’s going to wrap it up for this week’s Randomness – I’m sorry I’ve been such a sucky hostess the past few weeks with not having had time to hop around and visit your blogs and enjoy your randomness, thanks so much for hanging in there with me in spite of my suckitude.  My 3rd Blogiversary is in a couple of days – where has the time gone?!  I’m planning on doing some sort of wino/non-wino giveaway again, since it’s become a tradition.  Stay Tuned!