Mother Nature is still up to her old tricks – with Sunday marking the first day of Spring, you’d think she’d get her act together and start sending us some warmer weather instead of continuing to freeze us out at night.  She’s threatening to bring a chance of snow showers by the end of the week, after teasing us with upper 60’s yesterday.  No wonder my sinus infection never really went away even after antibiotics – my whole system is being confused by Mother Nature.

Princess Nagger and I have started playing the sports games on Wii again – she kicks my butt every single time we bowl.  One of these days I’ll have to figure out how she does the funky little dance she does just before she ‘throws’ her ball.   Though I’m sure I’ll look like a dork where she just looks cute.  She loves getting a ‘turkey’, because then she struts around the living room going 220;Gobble gobble, gobble gobble!”  while flapping her arms like wings.  I’m sure my lack of skill in trying to get strikes of my own are inhibited by me laughing the whole time.  That’s my story and I’m stickin’ with it.

We haven’t been working as feverishly on the Summer House renovation as we started off doing, because schedules have conflicted along with the weather.  But we’re finally getting to a point where we might be getting closer to painting the walls, now that the sheet rock has all been hung and the mudding has started.  Hubby brought home a sample paint color for me to approve based on what I said I want to paint the downstairs walls.  It’s appropriately named ‘Vino’.

Speaking of wine, I’ve been busy with the winemaking, too.  Although with the time change last week and my brain being a little fuzzy, I was all ready to rack a batch of wine over the weekend, got all my equipment organized and sanitized and ready to go when I realized I had only started that batch earlier in the week.  The primary fermentation needs to go at least 7 to 10 days, not 5.   At least the work of organizing and sanitizing my equipment wasn’t completely in vain, I did bottle the batch of Blackberry Malbec since it was ready.  It turned out even better than I expected!

I’m going to have to take pictures of the next step on the batch of champagne I’m working on, the boring stage is almost complete (as in the hurry-up-and-wait-and-let-it-clear stage) and the next stage will be fun because it entails adding more sugar and yeast for a final fermentation, then bottling it so it can ferment (and produce all the lovely champagne bubbles) in the bottles.  Then it’ll be another ‘hurry-up-and-wait’ mode since they’ll need to sit tight for two months while it ferments (and creates those delightful bubbles), which will then lead to what’s called riddling.  That’s where the bottles will get placed either in a riddling rack like this: 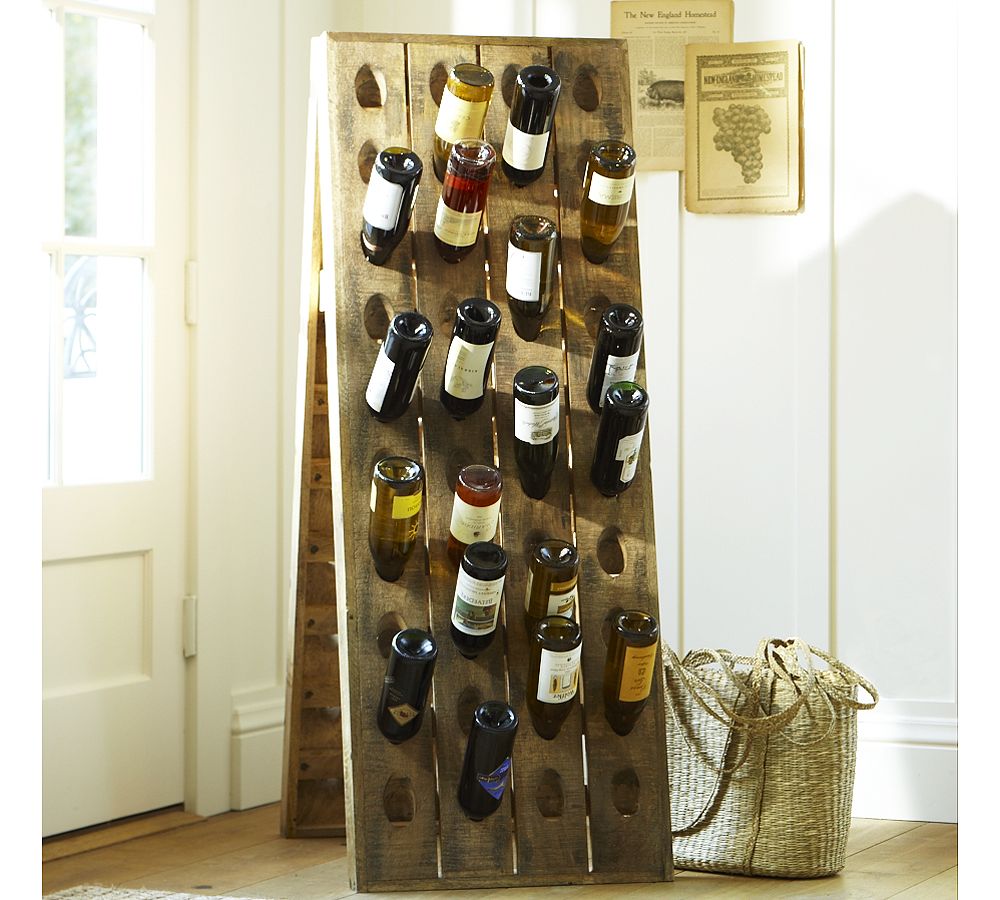 or a sturdy box and turned daily for a month to encourage the yeast that dies off and turns into sediment to relocate to the neck of the bottle.   I’ve decided I’m going to use some of our old barn lumber and make my own riddling rack.  It’ll be a fun project and a great way to use some of the old barn lumber.

After that, the real fun happens when those bottles are either put in a freezer or neck-deep in a rock salt and crushed ice brine mix upside down to freeze the sediment that will be in the neck of the bottles.  Once that is frozen, I’ll be finding out how quick my thumb can be when I remove the cap (I’ll be using crown caps to seal the bottles during the fermentation and riddling stage) and ‘dégorge’ the bottles.  You have to hold the bottles either upside down or at a sharp angle pointing into a bucket and remove the cap, allowing the frozen capsule to eject itself, then right the bottle and cover the neck with your thumb so you won’t lose too much of the good stuff from the bottle.   I bet it’s going to be very messy – hope my thumb’s big enough!

I decided to go with the traditional mode of Méthode Champenoise to make it real champagne.  I’ve been spending a lot of time researching and reading to educate myself on how to do it, and over the next three months will probably read and re-read and make sure I (mostly) know what I’m doing when the time comes.  I also discovered that the  ‘dosage’ you add to top off the bottles after the dégorgement is not a universal recipe – every winemaker puts together their own secret ingredients for the dosage, so I’m doing some fun experimenting to figure out what I’ll be doing for my own dosage when the time comes.   Should be interesting!

That’s enough for this week – still not quite as random, but hopefully somewhat interesting. Don’t forget to head over to The Un-Mom – the queen of randomness who never disappoints. Feel free to get your random on and join in the fun!