I don’t know about you, but from where I’m sitting, this year has been flying by way too fast.  Labor Day has come and gone, marking the end of summer.  Sort of.  We have a couple of weeks before the official end of summer, but technically it’s over.  Of course Mother Nature hasn’t gotten the memo, what with the 90-plus degree weather she’s been inundating us with.  She was kind, however, and gave us some amazing weather over the weekend. Thank you, Mother Nature!  She must have been taking her own holiday, because she’s back at it with the 90’s for the next couple of days.

We had an unexpected house guest for the weekend, so I didn’t get the things done I had planned on getting done…like racking and bottling wine, and picking the apples and grapes to make more wine and jelly with.  Our tree is loaded with apples: 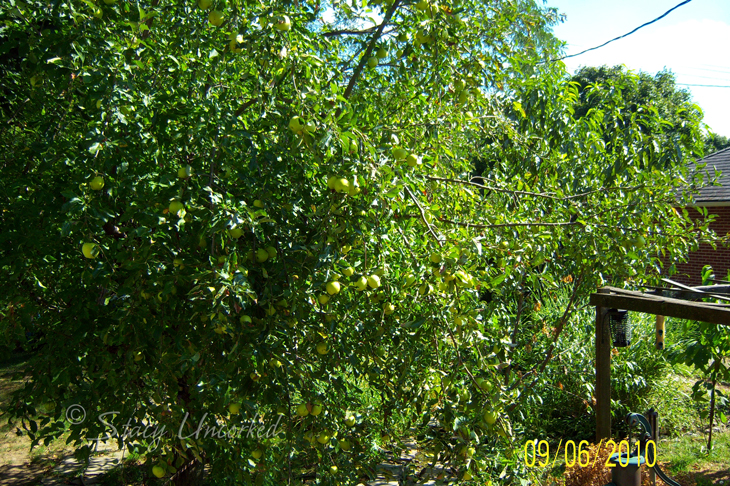 And even though quite a lot of them have fallen off with the birds and squirrels dancing in the branches, there are plenty to use for wine and jelly.  Just have to figure out how to pick the ones way up high – there might be some tree climbing in my future.

One of my web design clients has a ton of grape vines in his yard, and he offered to give me what the bees and birds hadn’t gotten to.  So we made a trip to Gettysburg yesterday and brought back this: 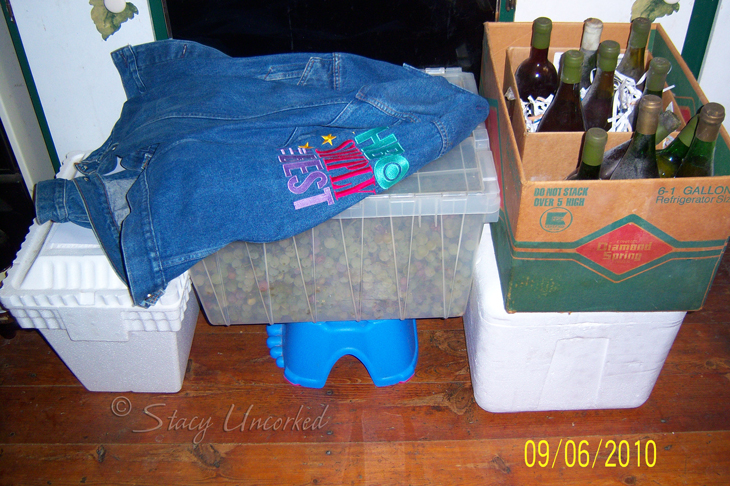 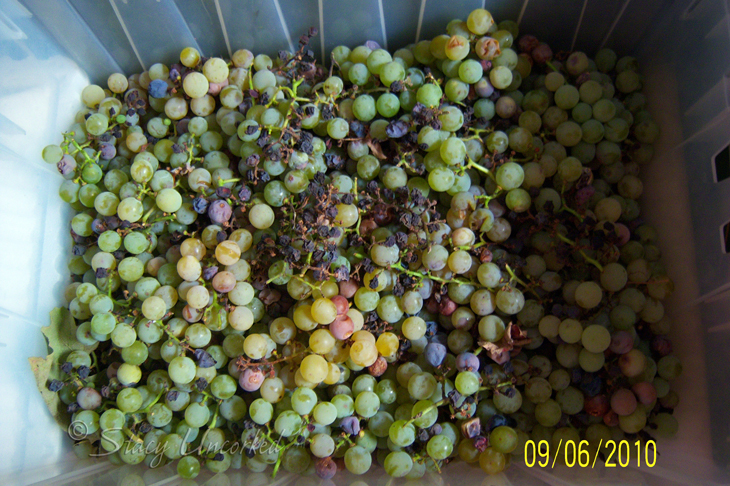 Along with those, he gave me two Styrofoam coolers with two other types of grapes – I have my work cut out for me this morning to clean them, separate them, destem them and flip a coin on whether I’ll be turning them all into wine, or making some regular grape jelly out of them.

Not only did he give me three different varieties of grapes to work with, he also pulled some really old dusty bottles of wine out of his basement for me since he and his wife aren’t big wine drinkers: 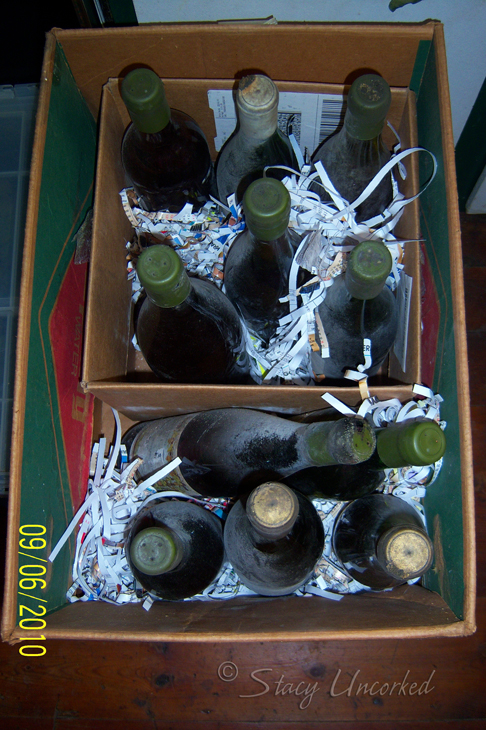 Some of these bottles are so old they’re from before I was drinking age!  I checked online, and while wines never really go ‘bad’ as long as the cork is still intact, there could be some oxidation and loss of body and flavor.  As long as no air or oxygen has entered the bottles (if any of the corks have started to break down they’ll allow air into the bottle) then they won’t be vinegar.  Yet.  The only way to tell if it’s turned into bad sherry is to taste it – so when I’m feeling adventurous I’ll do just that and let you know the results.  He and his wife also stopped by on Saturday and dropped off some homemade wine that his dad made a long time ago: 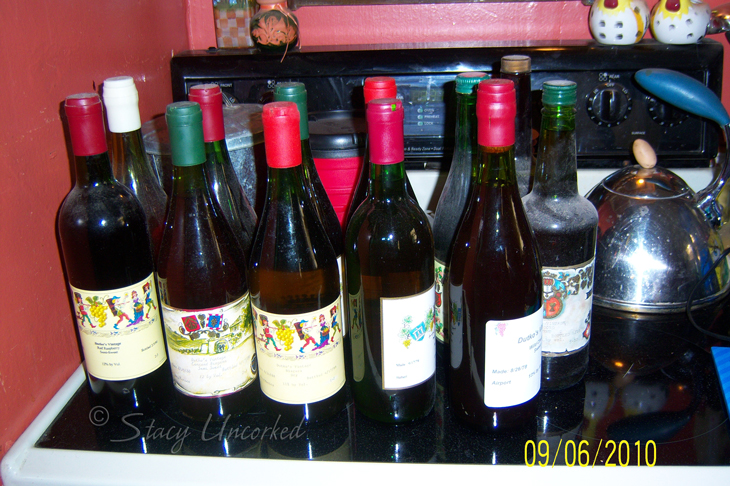 Also very old – so we’ll see how those have held up over the years.  I’ll keep you posted.  Meanwhile, his dad is no longer making his own wine, so when they go to New Jersey for a visit this weekend, he’ll be bringing back any of the wine making equipment his dad no longer uses – isn’t that sweet?  So now more than ever I’m going to need a separate outbuilding for my winemaking so I’m not hauling heavy carboys up and down the basement steps to do the racking and bottling in the kitchen.  I’m just sayin’.

We had a meeting with the school Psychologist on Friday to go over the results of Princess Nagger’s Gifted Testing.  She passed with flying colors, so she’ll be starting with the Gifted Group this week.  What’s nice is she won’t have to go to school earlier or stay later – they just replace certain homework with work more her ‘level’, like 4th grade reading instead of 2nd grade reading, and 3rd or 4th grade math.  She’ll also get to do some fun projects – Thursday they start a session on Archaeology – right up her ally.   Or at least close enough to her love of dinosaurs and plans to be a Paleontologist when she gets older.  Their first ‘assignment’ they’ll be learning the proper way to dig – by digging a chocolate chip out of a cookie.  It sounds like with the ‘extra’ learning she’ll be doing, she’ll also be having fun, which to me is important.  She still needs to be a kid!

The neighbor kid has been annoying us to no end – riding a dirt bike and/or four wheeler up and down the property line for hours.  Loud hours.  We think it’s time to put up a privacy fence along that side, just to eliminate the annoyance.  Not to mention he doesn’t pay attention to where he’s riding – Rolex got through the invisible fence once and got hit by the bike.  Luckily he wasn’t hurt aside from some minor bleeding because he bit his tongue – it could have been way worse.  And yesterday, the kid almost clocked my hubby while he was out trying to cut the grass along that edge of the property – scared the living daylights out of the hubby.

Speaking of loud noises coming from the neighbors, this upcoming weekend they have their annual Dyno Days happening – the neighbor rents a Dynamometer and all his hot rod car buddies converge and run dyno tests on their loud cars.  They drive their car onto the Dynamometer and rev the engines (tires are spinning on the thing) which makes for a very long, loud day.  I won’t be sorry that I’ll end up missing it this year since I’ll be spending the day at Bloggy Bootcamp.  Hubby said he’d be happy to record the noise so I won’t feel left out.  So considerate.

Tomorrow is my 2-year blogiversary – I know, it doesn’t seem like it’s been that long, and because of my bloggy-hiatus and trying to get caught back up in the blogosphere, it’s almost as if I’m starting over.  Last year I had a giveaway for my blogiversary, so I think I’ll have to do a repeat performance again this year.  Stop by tomorrow and see what I have up my sleeve!

That pretty much takes care of the randomness within my brain for this week – if you have scrambled brains like I do, you should consider stopping by to see Keely and deal with it.  Go forth and be Random!