I’m tired.  Best laid plans were thwarted and I wasn’t able to write my regular post for today, as chaos continued with the emotional house guest needing to talk for hours about what’s going on with their marriage, or as of yesterday, the end of it.  Last-minute errands needed to be taken care of before we head out on vacation this weekend.

One of which was finally making time to go into the DMV to renew my drivers license – which expired back in December on my birthday.  Ahem.  I did renew it online back in December, but I just never made the time to deal with the chaos of the DMV to get my picture taken and be done with it.  I figured I’d better not tempt fate by only have the paper showing it’s been renewed in case I get pulled over on our road trip to Iowa.  Better safe than sorry.

Another errand involved complications with Wal*Mart’s new cash registers (they’re apparently redoing the entire store…they started off with new shopping carts and new cash registers.)  The new cash register double-dinged my PayPal card for $100 and still showed a funky error they couldn’t figure out, so I told them to negate the entire transaction and I left the full shopping cart of stuff for them to put away.  Luckily PayPal wiped out the bogus Wal*Mart transactions and gave me my money back.  So tomorrow I’ll (reluctantly) go back, armed with cash instead – don’t need to have a déjà vu moment.

I’m running on fumes.  I’ve had very little sleep all week, and now my plans to not go anywhere tomorrow, have some fun and play catch up on my blog reading have been thwarted by the Wal*Mart fiasco of today and the fact that I really need to bottle some wine before we leave.  Not because it can’t wait until we get back, but after this week, I plan on taking lots of it with me to enjoy whilst on vacation.

The next two days will be a flurry of activity to finish all the laundry of the clothing we’ll be packing, the attempt to not over-pack for the two weeks we’ll be gone, and try to reduce the ever growing mess of ‘stuff’ that never ends with the tornado that is Princess Nagger.

So, all my wonderful lovely bloggy friends – I will be offline for the most part until next week.  I do plan to do some posting and blog hopping while we’re hanging out in Corn Country over the next two weeks, but I don’t want to be a rude guest to my darling sister, so I’ll steal some moments here and there randomly – when you least expect it.  Probably with pictures like this: 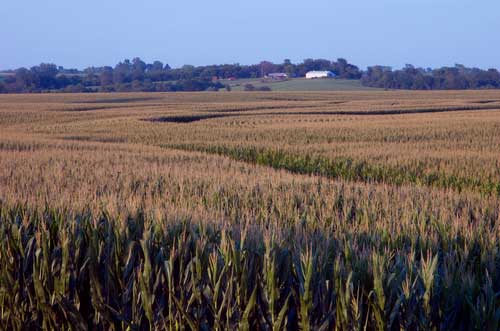 Unless we find out if the University of Iowa has some sort of tourist trap mode of viewing their Paleontology Repository.  That would definitely be Princess Nagger’s first choice.  This vacation is so needed right now, and I plan to relish every moment of it!  See you on the flip side!  Or somewhere in the middle.