Princess Nagger thought the overabundance of snow we got was the best thing ever.  Especially when she was able to not only slide down a big pile of snow like a penguin, but had another slightly smaller pile of snow that was the perfect mountain for her dinosaurs to play on.  I came out of the Summer House to head into the main house, and was a bit startled at this sight: 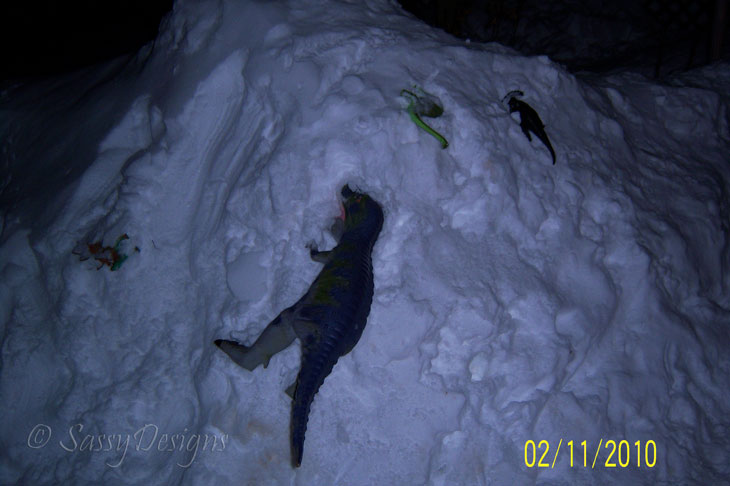 The largest dinosaur is about 2-feet tall, and seemed to be making great progress chewing his way to the top – the smaller ones looked like they were having a slightly more difficult time getting up the mountain: 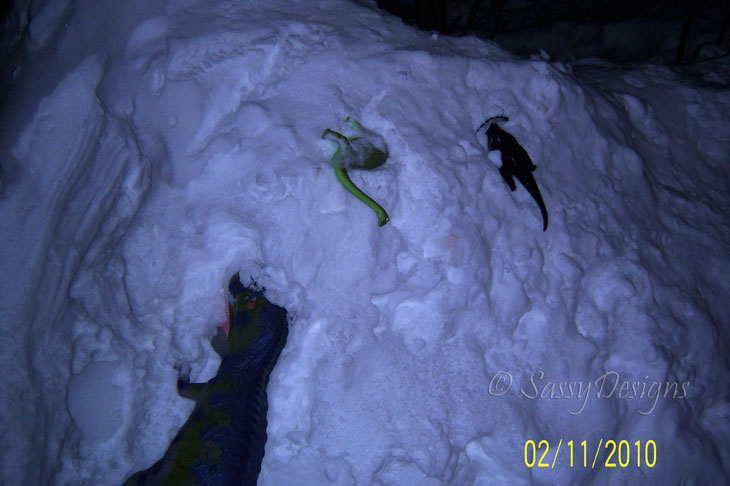 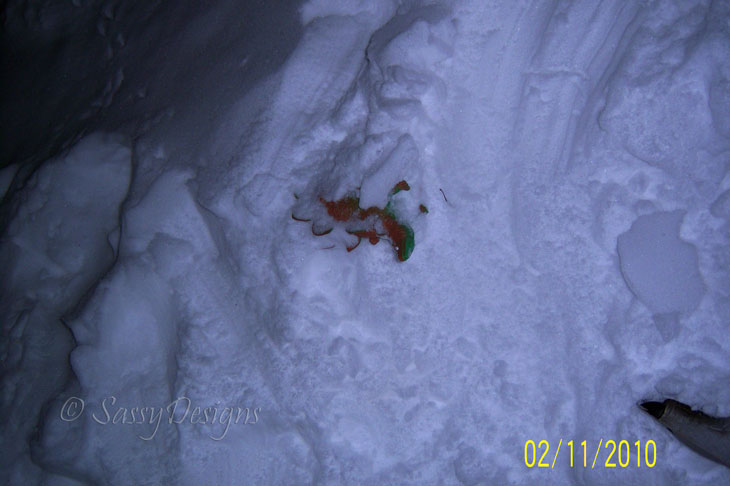 The next day brought much better weather for the adventurous climbers – the big guy was able to successfully arrive at the top of Snow Mountain: 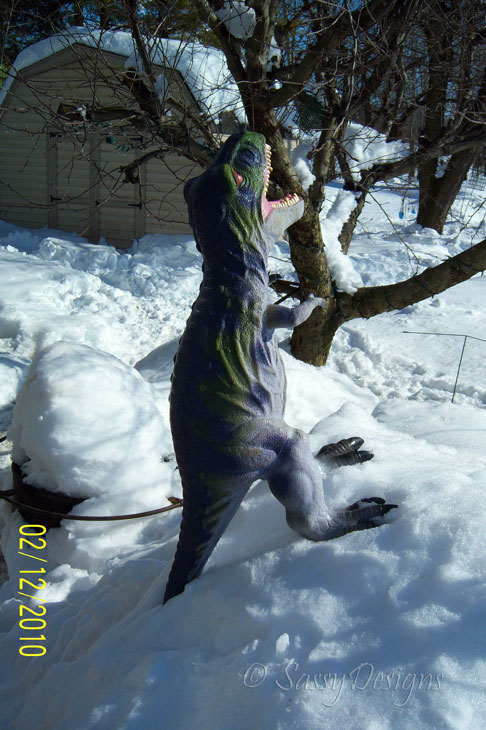 His friends, however, didn’t seem to have made much progress overnight: 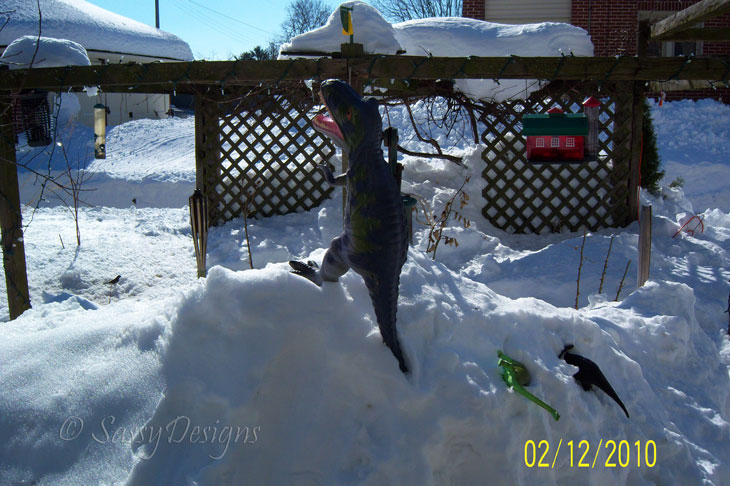 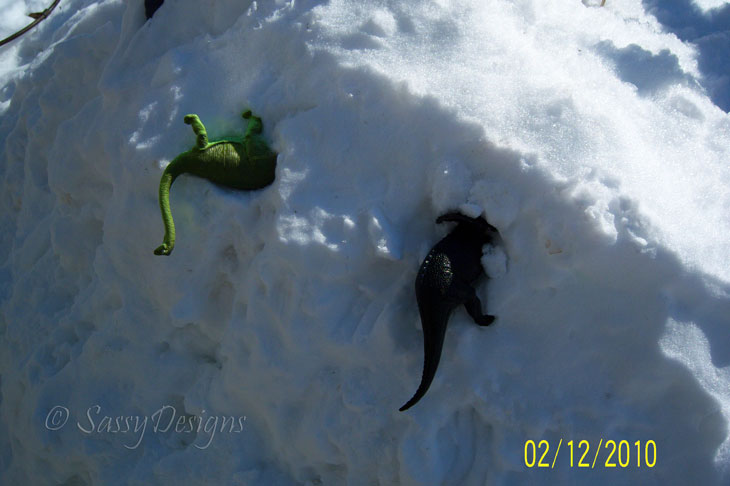 Although the stegosaurus did look like he was able to clear some of the avalanche for a better chance of making it to the top: 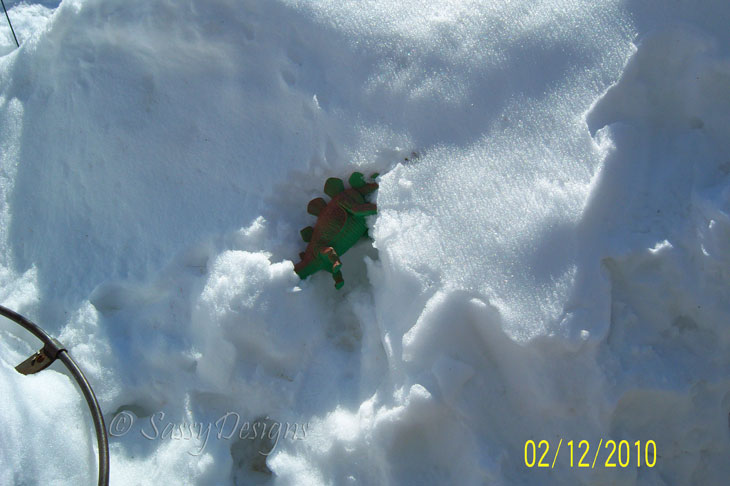 Sadly, the only dinosaur that made it to the top of the mountain was the big guy.  The smaller dinosaurs were snatched from their precarious perch by the nefarious Rolexasauraus, who thought carrying them out to the snowy tundra was much more satisfying than seeing them struggle to the top of snowy mountain: 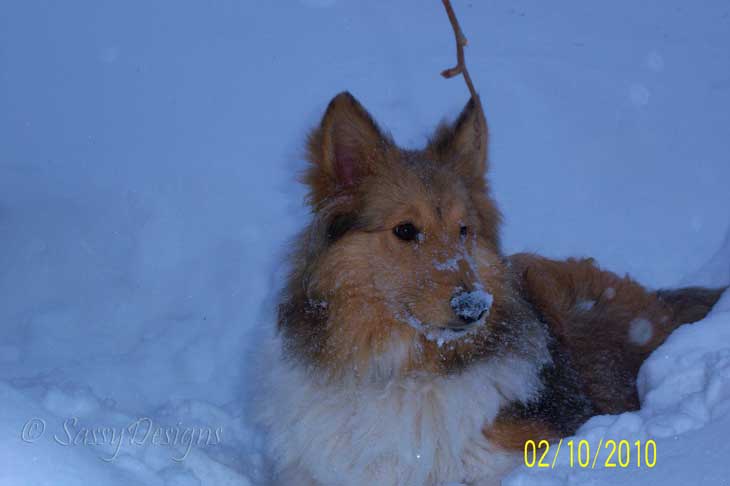 But this carnivorous creature would soon learn that he would get no satisfaction from his stolen prizes, since they were far from juicy and tender and had more of a rubber texture to them.  So he abandoned them out in the snowy field and chased some flying dinosaurs for a while instead; the Penguin Princess lead the wayward dinosaurs to safety, and everyone lived happily ever after.

PS:  Mother Nature warmed things up after a long cold spell and sent rain to melt some of the overabundance of snow.  Just when we thought we could anticipate seeing green grass again, another storm is moving our way with a warning for tonight until Friday morning.  Three words we really didn’t want to hear again this winter, 220;Significant Snow Event”.  So we just might have a sequel to the Dinosaur Snow Mountain…stay tuned!