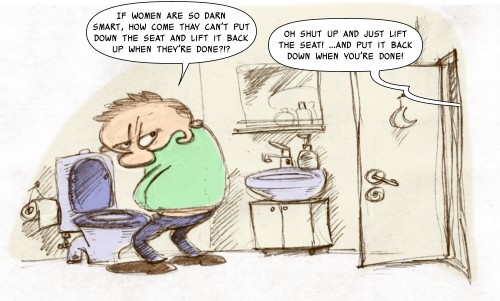 This week’s Spin Cycle is all about Pet Peeves.  Man, this post is going to seem like I’m ragging on Hovering Hubby.  I’m sure he has some pet peeves about me, but it’s my blog, so I get to be in charge.

I’m a pretty laid back person, so I don’t let things get to me.  But there are some things I don’t understand, but could be considered pet peeves:

Moments after I have the kitchen counter cleaned, either Princess Nagger or Hovering Hubby will load it up with crap.  That I end up having to clean off once again to make room on the counters to do my thing in the kitchen.  It’s almost as if the gleaming surface beckons to them and invites them to lay junk mail, toys, paperwork, toys, or random stuff piled on top of stuff.

Half empty Pepsi cans scattered in odd places.  The bookshelves, the kitchen counter, the water pump outside – you name it, there will be a half-full Pepsi can sitting somewhere.  Since I drink Vanilla Coke, hubby’s the culprit on that pet peeve.

I’m the first one up and the last one to go to bed.  Why?  Because I’m the alarm clock.  Hubby won’t stir a muscle when the alarm goes off, so I have to elbow him awake.  Some mornings I may elbow him a little aggressively if I’m jolted awake having had little sleep the night before from his loud snoring.  Now that I think about it, the amount of times I kick or elbow him when he’s snoring is probably his pet peeve about me.  I accidentally kicked him out of bed one night (he literally fell out of bed trying to avoid my elbow, knee and foot – I felt bad, but I also tried very hard not to laugh.)   I’m the last one to bed because I’m the one making sure all the HH and PN plates, silverware or bowls and cups are actually in the kitchen and not scattered around the living room, kitchen or dining room.  Sometimes Hovering Hubby will do what he does best – hover – while I scurry around and pick up random things to put away before bedtime.  Then I’m up for at least another half hour switching laundry or loading the dishwasher.

Which brings me to my next pet peeve – when HH knows that I’m going to run the dishwasher, I have him collect his random coffee cups that are sitting by his computer so I can sandblast them rinse them out before putting them in the dishwasher.  Then I’ll get up the next morning and find that he has made a midnight trip downstairs for a bowl of cereal.  Which took place while the dishwasher was running – and instead of adding his now dirty bowl and spoon to the running dishwasher, he leaves them in the sink.  Without rinsing them.  So I find a bowl with the spoon stuck to the inside of the bowl from the partially dried milk.  After I had made sure the sink was clean and empty before going to bed.

When I’m in the middle of doing something that someone else can’t help with – like cooking dinner or making wine, HH will ask every five minutes if he can help with something.  And every five minutes I tell him “No, thanks.”  But when I’m doing something that he could help with, he makes himself scarce.  It’s like he knows when I do not require help, that I can’t complain because at least he asks.  Every five minutes.   On the weekends he’ll ask what’s on his ‘list’ – I tell him he’s a big boy, he can figure out what needs to be done on his own without me making a list for him.  But when I do decide to give him a list, he pouts.  Go figure.

So that this isn’t all about the Hovering Hubby, let’s see what other pet peeves I have:

People who drive while talking on their cell phones – especially those that cut me off in the process.  I’ll end up tailgating them.

People who block the aisles in the grocery store and ignore your polite “Excuse me” because they’re too busy chatting with a friend or on their cell phone.

People who run into you and don’t say “Sorry” or “Excuse me” when they practically knock you over, but throw you a dirty look like you’re the one in the wrong because you were in their way.

That’s probably enough Debbie Downer Pet Peeves for the day – what are your pet peeves?  Do we share any?  Do you do what I do and let most of them roll like water off a duck’s back? 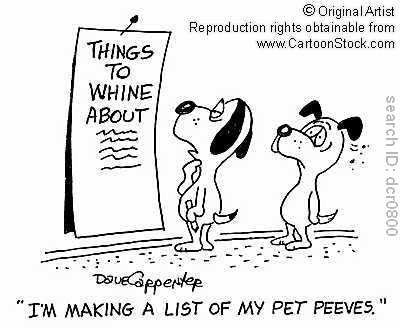 This Spin Cycle was brought to you in part by Jen, who isn’t a pet peeve but is Sprite’s Keeper.  Head on over and check out the other spinners – find out if they share the same pet peeves you have!

29 thoughts on “Spinning up some Pet Peeves”