It seems like forever since I’ve done a Friday Fragments post.  I’ve missed the Fragmented group!  Boy has it been a long week, I’m still trying to work out the kinks on my new digs here, so I’ve had my head buried in code that is true gibberish to my fuddled brain.  What better way to de-fuddle my brain than throw some random fragments into a post?  You can thank  Mrs. 4444’s and de-fuddle your brain, too.  Try it, you’ll like it!

Hope everyone had a wonderful Christmas and New Year – we had a series of unfortunate events over the Christmas weekend but luckily no additional drama in this New Year.  Princess Nagger still hasn’t lost those two loose teeth yet, the bottom tooth is stubbornly holding on while her big tooth is growing in behind it.

I keep offering to use pliers or tie a string to her tooth and the doorknob, but she resists both ideas.  Hubby offered to tie the other end of the string to one of the dog’s tails, but she still won’t buy into our potential remedies.  She keeps wanting to eat crunchy Cheetos since that’s when her first tooth fell out.  Guess I better stock up! 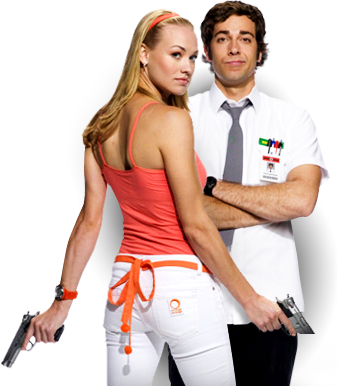 Chuck is back!   This show is one of my absolute favorites – it was new last year, and there were ugly rumors going around that NBC was going to not bring it back, but they relented to the masses and it’s back.  Sure, it’s only coming back now, which is technically mid-season, but at least it’s back.  Better late than never!

If you missed it last year, you shouldn’t miss it this year.  It’s that good.  It premieres Sunday night at 8:00 pm with a 2-hour premiere, then will resume it’s normal Monday night slot at 8:00 pm.  So basically Monday we’ll get a bonus episode.  I can’t wait!

I still haven’t taken down my Christmas decorations yet.  I didn’t go ‘all out’ this year like I usually do, so there’s really only the tree and a few extra items to take care of, but it’s been so cold and windy that schlepping storage tubs to and from the shed wasn’t an attractive prospect for me this week.

The wind is especially biting on the front porch, so that decor is still blazing brightly at night.  At least it’s not so much ‘Christmasy’ as all that – white lights and green garland on the porch posts, and 4 lighted deer on the porch with hay bales, one group of hay bales is covered with a white tablecloth to look like snow.  If I really think about it, it’s more of a ‘winter scene’ rather than a Christmas one, so I could technically leave it up until Spring.

We were supposed to get not-so-frozen temperatures this week and weekend, but the arctic blast from the North made sure that didn’t happen.  And now we’re expecting a few inches of snow overnight and biting cold temperatures and wind for the weekend, so that pretty much eliminates the desire to hang out on the front porch and take everything down.  I might tackle the Christmas tree this weekend just so I can have my living room back.

If you tried to access my blog on Wednesday morning, you probably saw the ‘error’ screen from Bravenet, where I have everything under the sun hosted.  Apparently they had a server or something major crash during the night, which rendered everything hosted there inaccessible.

I’ve had hosting there for about 4 years and this is the very first time anything major like that ever happened, but it sure stressed me out big time.  As if banging my head against the keyboard trying to figure out how to code my blog wasn’t stressful enough.  Hopefully it’ll be another 4 years or longer before anything like that happens again. *fingers crossed*

PN’s bus was late getting home yesterday – apparently the bus broke down.  She gave me a great big bear hug when she finally got home, and this is the little conversation that took place:

PN:  “I didn’t think that you missed me when I was at school.”

Me:  “Worked on trying to figure out how to finish setting up my blog and worked on other websites.”

PN:  “What, you were walking around with your laptop and not sitting?”

Me:  “No, silly – I was sitting while working on my laptop.”

PN:  “So you were sitting around all day!”

Me:  “What, you think I can’t be busy doing stuff and miss you at the same time?  I’m a multitasker, you know!”

PN:  “I’m a multitasker, too – watch me eat my after school snack and watch a dinosaur show at the same time!”