Remember how I mentioned last week about the trouble I went through to secure Spike the Ultra Dinosaur for Princess Nagger for Christmas?

She decided last Monday night as she was getting ready to fall asleep that she’d really really like the red one.

A bit confused I asked her: “Wait, a red one?  What, did you see a commercial for it or something?”  (I was racking my brain trying to remember if maybe she had seen me working on the Spike post earlier that day, but I had made sure to switch to another tab if she entered the room, so that couldn’t be it.)

She sleepily replied: “No, I just want a red one.  We saw a red one when I was at the store with you, but I can’t remember what store.  I just really hope I get a red one for Christmas.  I really really want a red one.”

I vaguely remembered seeing a red one when she and I were out shopping the day before Thanksgiving since she was home from school that day.  We were at Target.  Which makes sense that they would have a red one.

Then I saw it again when I was looking for pictures for last week’s post – and I read the reviews about both of them.  The red one got higher reviews than the green one did, apparently people have had issues with the green one…the mouth or the sound stops working after a short amount of time.  But no one’s had that issue with the red one.  Weird, huh?

Then the conundrum – while the red one at Target’s regular price is $10 less than Toys R Us’s green one, Toys R Us had the $50 off sale…which makes the Target one $40 more.  But I wanted to make sure Princess Nagger was 100% happy – after all, who wants to crush a child’s dreams at Christmastime?

So I braved the craziness of the gaggle of last-minute shoppers just 2 days before Christmas and ended up taking the green Spike back to Toys R Us.  Then took back another dinosaur to Wal*Mart she said she wanted, but said she didn’t have to get that one from Santa as long as he could bring the red Spike instead.  And finally headed over and secured a red Spike at Target.

She didn’t get to play with red Spike much because she got sick.  But yesterday she was feeling much better (thanks to the pink bubblegum medicine) and she had a great time playing with him.

And exclaiming over and over again she’s so happy he’s red. 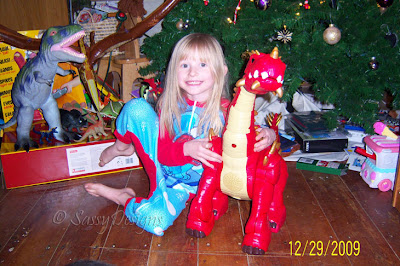 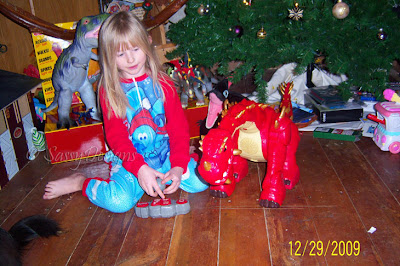 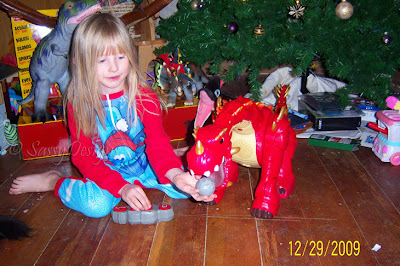 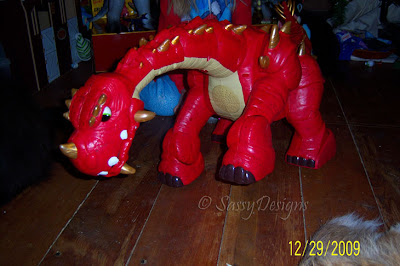 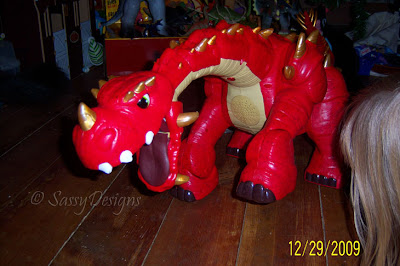 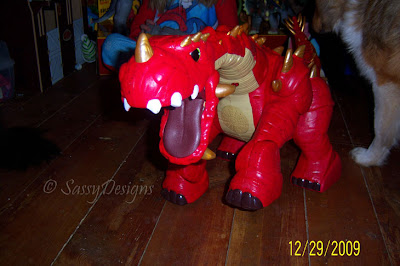