I don’t know about you, but the weeks seem to be screaming by at an alarming rate.  This week was no exception.  Luckily Mrs. 4444’s  has made Friday a great way of tossing all those random moments that tried to speed by into one headache-free post.  A way to downshift from the hyper-speed and relax after clearing your brain of tidbits that have been rattling around and throw them into one post to ensure they can’t fully escape, but ensuring that you can.  Mostly.

I’ve been so busy with Thanksgiving, the 3D Project and Christmas decorating, I’ve felt like I was in some sort of vortex being away from my computer for extended periods of time the last couple of weeks.  Which has put me way behind on blog reading and commenting, but I’m sure you understand and can totally relate.  Luckily things are beginning to calm down and I won’t be trying to juggle a zillion things at once (only about a million), so I’ll be able to start making some catch-up progress.  As long as Murphy and his Law don’t stalk me.

My fingers are still recovering from the completion of the Princess Nagger Nightmare 3D Project.  If I were a notorious cat burglar or art thief, now would be the time to really clean up, because I’m pretty sure I hot-glued my fingerprints off during the whole process.

She carefully carried it on the bus and it arrived safely at school.  I guess they’re setting up a ‘neighborhood’ in the middle of the school of everyone’s house project.  Hopefully we’ll get to see the neighborhood when we go in for the Parent-Teacher conference next week.  If so, of course I’ll be bringing my camera and will take pictures. 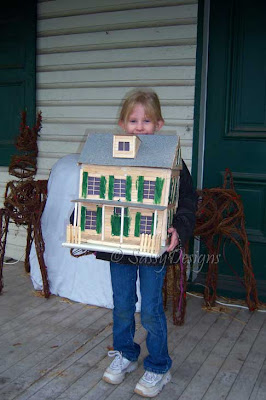 Christmas decorating is going along slow but steady.  I did get my front porch decorated on Sunday: 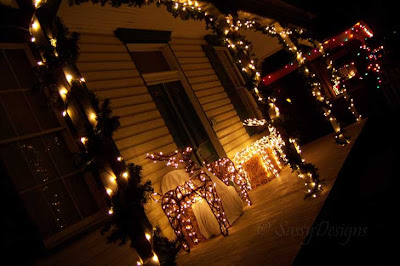 And on Wednesday, the tree that looked like this: 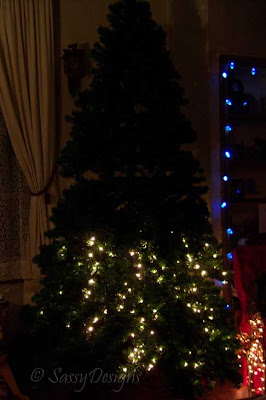 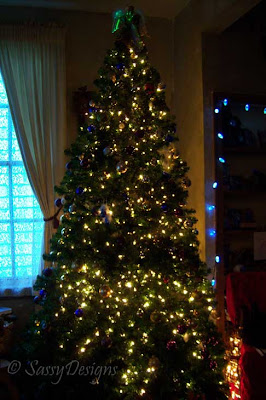 There are still some dark stripey parts, but I’m leaving it just like it is…I think it gives it character.  We still have some ornaments to add to it (like my slew of Swedish ones), so we’ll be working on that today after PN gets home from school, then finishing the decorating of the entire living room.  By this evening it’ll look like Father Christmas threw up in our living room.  Stay tuned.

Princess Nagger wrote her Santa Letter this week – I was relieved to see that she has done away with her expensive requests of Santa.  Originally she was going to ask for an XBox 360, and Nintendo DS.  Her ‘reasoning’ behind them was priceless, though, because she said we wouldn’t have to worry about them being too expensive, because Santa would bring them.

I thought maybe the fat man in red was going to bring her some disappointment this year.

Instead, she’s asking Santa for a “giant realistic looking inflatable Pteranadon and an indoor trampoline”.  She also offered up her own ‘Good’ and ‘Bad’ list, naming a few of her classmates on the ‘Good’ side (and added Santa to the list), and on the ‘Bad’ side, she only named the one boy in her class that apparently annoys her because he bosses her around.  Then she finished the note with “I’m writing my letter with a pen that looks like you, only in bird form.”  She wrote her note with this: 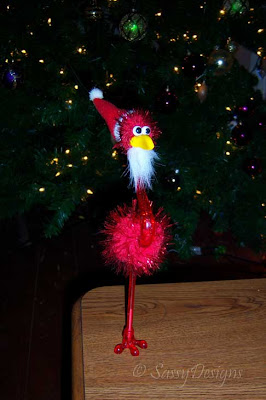 Luckily I did locate a ‘realistic looking’ 62-inch inflatable Pteranadon, so she’s going to be really happy.  As for the ‘indoor trampoline’, we don’t really have the room for it, and we’d get an outdoor one if we had a fenced in backyard that would prohibit the annoying neighbor boys from coming over and jumping on it.  Because they’re the kind that would.  So I made sure I ordered a bunch of extra cool dinosaur items that will be left by Santa in lieu of the trampoline, and he’ll leave her a note apologizing for the fact that the elves broke said trampoline.

Early yesterday morning we had some major storms roll through, and apparently the high winds knocked out the power in a wide area.  Since my alarm clock is backed up by battery, it still woke me up, and after the second snooze cycle, when the radio came back on, the news mentioned that the schools had a 2-hour delay.  Too bad the alarm can’t be programmed to accommodate a 2-hour delay and let me sleep in.

Luckily I had the foresight to secure the front porch decorations with cable ties – one of the reasons I keep the hay bales from the fall decorations, so my lit deer won’t look like they were lit when they topple over from the monster wind gusts.  They remained upright throughout the storm.  I’m still trying to figure out what to put on top of the hay bales to add just a little more Christmas Cheer to the front porch.  Though since I collect deer, having just deer on the front porch works for me, but Princess Nagger thinks we need a little something more: 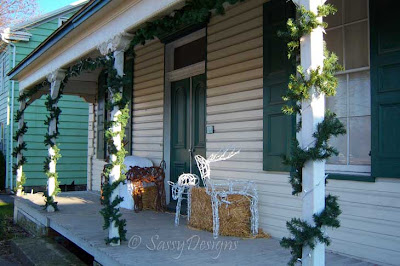 I was contacted yesterday by a rep for Kmart, and apparently the Blue Light Specials are back. To, as they say, ‘celebrate in style’ Kmart will be giving shoppers on Twitter a chance to win a $50 gift card everyday!  In addition to the chance to win daily, everyone following @KmartDealsnNews on Twitter will be automatically entered for a chance to win a $500 Kmart shopping spree.
The sweepstakes is running now through December 23rd  – all you have to do is follow @KmartDealsnNews on Twitter from your personal Twitter account and issue a Tweet everyday using the hashtag: #KmartBLS.  Each day is a new opportunity to win, so the more often you tweet – the better your chances are to win a Daily prize!
For more info on sweepstakes details, check out: http://tr.im/kmartBLS, and for Official Rules: http://tr.im/kmartBLSrules.
A little preview for this weekend’s (12/5 to 12/6) Specials:
Bluelight Special teasers for 12/5 to 12/6:
·         All 14k gold Birthstone Baby Charms $29.99 (reg $69.99)
·         Mushabellies $14.99 (reg. $24.99)
·         4 piece table tennis table $99.99 (reg. 149.99)

PN:  “I saw a commercial about something that rolls on wheels and if I get grounded, I’ll just use that to watch TV!”  (turns out it’s some sort of spy gear)

PN:  “I will just do something else, and well, I’ll actually spy on Dada if he’s here!”