It’s Friday already – and you know the drill, it’s the day I conglomerate my Fragmented thoughts randomly into one post.  Mrs. 4444’s  is the leader of the pack, yada yada yada – there’s quite a bit to conglomerate, so we’ll skip the formalities this week, shall we?

Is anyone else entering ‘panic mode’ with Christmas just a mere week away?  Usually I’m done with Christmas shopping by Thanksgiving.  This year?  Not so much.  In fact, I’ve been hurriedly scurrying about the last few days trying to get that shopping done.

I thought I could get it all done in one day.  Yes, I do tend to be overly optimistic at times, why do you ask?  Today will be day 3-1/2 of my ‘get it done in one day’.  Mostly because I remembered I forgot to stop at certain places only after I was already on my way home.  Or I ran out of time.  Or both.

I’ve been a little sparse visiting blogs this week because of my frantic nature of trying to get it all done.  Hopefully today will be my last foray into the fray before Christmas – then I’ll be able to wrap presents like a maniac and get some boxes of goodies ready to ship by Monday  Tuesday Wednesday Christmas.

Oh, yeah – and don’t get me started on the fact that I haven’t even gotten my Christmas cards ready to send out yet.  They’re waiting patiently.  I wonder if I should just wait and send them early next year.  Or in July.  Which technically is ‘next year’.

I kept thinking it was a different day this week.  Wednesday I thought it was Thursday, most likely because I had done my bi-monthly grocery shopping the day before; add some Christmas shopping in there, and it makes for a terminally long day.

I still needed to make a trip to Toys R Us as well as a few other places, but wasn’t in the mood to deal with multitudes of frantic shoppers.  But I talked myself into going that day, since it would probably only be worse the next day, since this time of year more people start taking Friday’s off to get their Christmas stuff and shopping done.  You know, because I was thinking it was Thursday.

So I reluctantly headed out, and was surprised at how packed the Toys R Us parking lot was – it wasn’t even close to a lunch hour time frame, and usually there are very few people at that time of day.  As I parked out in the tundra of the parking lot, it suddenly hit me that it was Wednesday.  And I seem to recall getting an email from TRU touting some mega ‘One Day Sale’ for Wednesday.

Oh, well, I was already there, might as well make the best of it.  I successfully picked up the dinosaur things that Santa will be leaving in lieu of the indoor trampoline Princess Nagger asked for, and saw something else that she would love.

But that’s a post all in itself.  Let’s just say it involved two more separate trips to Toys R Us, plus a store that was worse than Wal*Mart on the lack of cashiers to a long line of patrons that resulted in me abandoning a full shopping cart and leaving empty handed.  And some some good stuff.  I’ll tell that story on Monday

Princess Nagger has been spiking a fever almost every night for a week, but by morning, it’s back to normal.  I’m thinking it’s either her 2 loose teeth or possibly her 6-year molars trying very hard to come in.

I had a craving for Arby’s Chicken Salad Wrap the other night, so when hubby was stopping to pick up a Happy Meal for the Princess Nagger, I asked if he could stop at Arby’s and get me a Chicken Salad Wrap.  He came home with a boring old regular Chicken Sandwich.  He said the guy at Arby’s thought he was crazy, because he had never heard of them before. 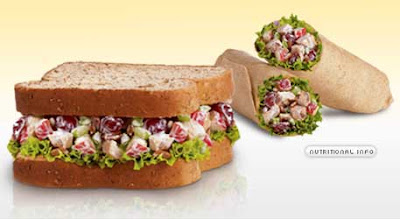 The lack of knowledge here locally was bugging me to no end – I didn’t get a chance to have one as planned when we were in Louisiana in July, and on the long drive home one of the Arby’s in Tennessee had the Chicken Salad Sandwich but not the wrap.  I thought maybe PA was just not ‘trendy’ enough to have the Chicken Salad at all.
I found the list of ingredients online and could easily just make my own version, but now it had become the principle of the lack of Chicken Salad at Arby’s in PA.  So I made some phone calls.  Luckily I was able to talk with someone at a different local Arby’s that knew exactly what I was talking about.  It’s a ‘seasonal’ item, but it’s coming back next month.  I’ll be able to satisfy that craving next month without having to do the work of making it myself.  I can wait.

Princess Nagger thinks paper money is worthless for the most part.  Although she does understand that the higher number on the bill means a better toy, so if someone offered her a 5-dollar bill or a 20-dollar bill, she’d be all about the 20-dollar bill.

Her Papa sent her 7 one-dollar bills in her birthday card this year, but she left them laying around and the dogs had a great $7 salad.  I guess next year if Papa sends her 8-dollars for her 8th birthday, he’d be better off sending them in coin form.  So far the dogs haven’t tried to chow down on the random change Princess Nagger leaves laying around.

As I was proofing this last night before scheduling to post, I got an email alert from our local news station with a Winter Storm Watch for late tonight into early Sunday morning.  Apparently we could possibly get 6-10 inches of snow tomorrow.  Of course now that I’ve put it out there, Murphy and his Law will have a chat with Mother Nature and they’ll bypass us completely.  If, however, we do get that kind of snow, I’ll be sure to take pictures of the snow dinosaurs Princess Nagger will be sure to be building.  I’ll keep you posted.

PN:  “I kissed Sean while we were waiting in the lunch line.  I’m going to marry him, and you’re invited to the wedding.”

PN:  “You keep up that attitude, and you won’t be invited to the wedding!”