It’s Friday! Sure, it’s Friday the Thirteenth, but it’s still Friday! I thought today would never get here. But then again, it did seem to get here fast.  I guess that would be an oxymoron.  I get to play along with Mrs. 4444’s and the gang for Friday Fragments – I missed playing along last week, but my fragmented mind wasn’t cooperating.
Fortunately it’s cooperating this week, so here I am.  It’s nice when your brain cooperates.  If your brain is cooperating, you should consider joining in the fun.  It’s always nice to have an excuse to pool your fragmented thoughts into one post, and Mrs. 4444’s is a wonderful host for the pool.  Come on in, the water’s fine!
******************************
DST is kicking my butt.  Instead of getting extra sleep with that extra hour, I keep ending up staying up too late.  Staying up too late is not conducive to reacting in a positive manner when the alarm rudely wakes me up the next morning.  I missed the snooze button and accidentally turned off the alarm Wednesday morning instead of getting up and slamming a cup of coffee waking PN up for school.
I woke up about 15 minutes after the bus had already come and gone. It was a flurry of activity getting her up and dressed and hubby kindly offered to drop her off and sign her in at the office so I didn’t have to go in my wild-woman ‘just woke up’ state.  I might have scared some people.  I know I scared the mirror.
******************************
Yesterday I realized that had no birthday paper wrap.  Plenty of Christmas wrap that will probably last me for a century couple of years, but birthday wrap?  Nada.  I had to run out and get birthday paper to wrap Princess Naggers presents yesterday – I forgot that she’s off school today for a Teacher Inservice day, which conveniently gives her a 3-day weekend for her birthday.  I figured I better make sure her gifts were wrapped before she came home from school yesterday, because when she’s home she’s an excellent stealthy shadow and she’d end up watching me wrap the presents.  Which would defeat the purpose of wrapping them to begin with.
When I got back in my vehicle after buying much more than just wrapping paper exactly what I needed, I thought I must have spent way more time looking at unique kitchen wares and other cool stuff that somehow managed to work their way into my cart, though I was unsuccessful trying to hunt down dinosaur wrapping paper.  I started to freak when I saw that the clock said it was already 2:06.  Was I really in Target for over 2 hours?
Sure, there’s something mesmerizing about that place, since I obviously didn’t just get the one or two things I had intended to get.  I was at least a half hour from home, and had wanted to surprise PN with a Happy Meal for when she got home.  No way would I have time to go through the drive-thru and get home and have enough time to quickly wrap her gifts before she got home.  Then I remembered.  I hadn’t driven my vehicle since before the time change.  I scored an extra hour to get everything done.
******************************
When Princess Nagger got off the bus on Tuesday, she was beaming with pride and carrying this: 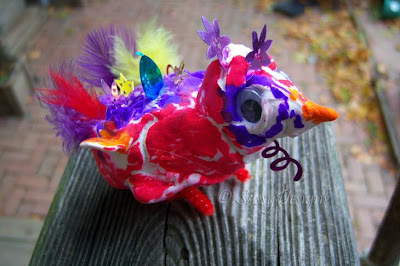 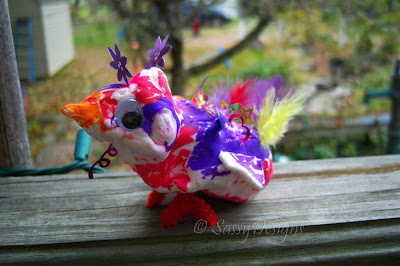 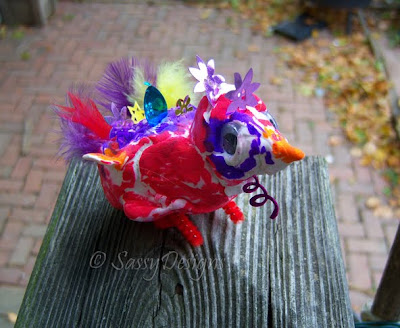 In case you’re wondering, it’s a turkey.  She made it in Art Class – she exclaimed that she loves Art Class.  She was a little bummed when she literally flattened its head as she tried to put one of the googly eyes back on after it fell off when she was messing with it after she got home from school.  I was laughing so hard that it was difficult to ‘fix’ it just right, so when I was done she said:  “But the head used to be perfectly round!”  I told her now it just has extra character.
******************************
Speaking of turkeys, Princess Nagger expressed great concern about whether or not I had already picked up a turkey for Thanksgiving.  She was worried that there would be no turkeys left, and Thanksgiving would be ruined without one.  Little did she know I had one stashed in our basement freezer, patiently waiting for Thanksgiving to arrive.
When I mentioned that I already did have one, she was then worried about the expiration date.  She’s big on checking the expiration dates on everything.  I had to appease her angst by going downstairs with her hot on my trail to double check and make sure it didn’t expire before Thanksgiving.  Even though it was frozen.  She was quite relieved to see that it wouldn’t expire until June 2010.  Thanksgiving was saved.
******************************

PN (Wednesday night):  “You need to have something waiting for me when I get home tomorrow.”

PN:  “Because Mrs. S is going to be celebrating my birthday tomorrow, so we can just go ahead and do something for my birthday early.”

Me:  “You’re still trying to finagle me into letting you open one of your presents early, aren’t you?”

PN:  “Well, if you can’t find something to surprise me with, then I suppose that I could just open one of my presents early.”

Me:  “Seriously?  You’d rather wait until next year to bring cupcakes for your birthday?”

PN:  “Well…..maybe I could bring cupcakes on Monday.  I’m sure everyone would like them.”

Me:  “We’ll see – I have cake decorating stuff, so we can use that to decorate if you want, or we can pick up something on Friday when we get the ingredients to make the cupcakes.”

PN:  “Do I get to decorate the cupcakes?”

Me:  “Absolutely – you can decorate them however you want.  I’m sure everyone will love them.”

Note:  I sent a note in to the teacher on Thursday morning to find out how many students are actually in the class so we make sure we make enough cupcakes, and to make sure there weren’t any other allergy issues with any of the other kids aside from nut/peanut ones.

Because of the note, the teacher decided to postpone the originally planned ‘celebration’ for PN until Monday…ooops!  PN didn’t seem to mind, though, since I picked up some party favors for her to give out to her classmates on Monday.