I’m late, I’m late – for a very important date!  With Mrs. 4444’s and the gang for Friday Fragments.  Usually I have my post all written and scheduled to post at 12:01am, but this time I’m writing them before the crack of dawn.  This should be interesting!  It’s Friday, after all, and that means it’s time to dust off the cobwebs of your brain and collect all the things rolling around in the dark corners to toss into a pile of Fragments.  Any little tidbits that were too long to Tweet but too short to turn into its own post can be compiled into one easy post.  Well, for everyone else, that is.  For me, it just turns one post into an even longer one because you know I tend to be wordy.  All. The. Time.  I was born that way.  Probably talking up a storm before exiting the womb.  My poor parents.
******************************

This is my favorite weekend.  Not so much the Halloween part of it, though it’s much more fun now that Princess Nagger is around to cause mayhem and excitement, but because Daylight Saving Time will come to an end.  We get to gain back that hour that was swiped from us in the Springtime.  Whenever that hour goes away, my brain never seems to be able to catch up until we get it back.  So my brain will be very happy Sunday morning for sure.

Since it’s still been dark before 7am this week, Princess Nagger thought I woke her up too early when she looked outside and exclaimed “It’s still dark outside!” giving me a look like I had some nerve waking her up so early.

One of my web design clients are Ghost Hunters.  They’re being featured on our local NBC station in a three-part segment about several different haunted locations in the Susquehanna Valley.  It’s like they’ve hit the ‘big time’ here in Small Town America.  Frogmama’s hubby probably wishes he were living in this area right about now.

******************************
I was spoiled last year.  Princess Nagger was in afternoon kindergarten, so I didn’t have to finagle her out of bed at an ungodly hour every morning to get her ready for the bus.  She also didn’t bring home homework for me to do.  That all changed this year now that she’s in first grade.  No more ‘sleeping in’ until 7am and the stacks and stacks of papers she brings home every day are enough to drive me crazy.  That and the homework for me to do, helping her with some project, then writing my observations.  Must be a conspiracy to get us parents to write long-hand since a majority of us tap speedily on keyboards and rarely flex our long-hand muscles.
******************************
The one benefit of having to finagle Princess Nagger out of bed so early is that it has eliminated the Bedtime Wars at night.  Some of you are aware of those – the loud protests, the creative stall tactics, all in the name of staying up just a little while longer.  Now that Princess Nagger has been having to get up so early, not only does she not protest at bedtime, sometimes she even sneaks up to bed early.

If hubby and I are sitting on the couch, I’ll see out of the corner of my eye that she’s trying to be as stealthy as possible as she creeps up the stairs.  It’s quite comical.  Other times hubby and I may be out on our respective computers in the Summer House and she’ll call me on the intercom with some last minute requests and say Good Night – I’ll go in and check on her and she’ll already be fast asleep with the phone on her pillow.  Sleeping like an angel.  Blissful.

Jan from Jan’s Sushi Bar  was a wild woman last week posting a plethora of recipes to entertain the masses and spin circles around the Spin Cycle.  She encouraged me to post my Thanksgiving Feast recipes, so this week I’m doing just that.  For those that are just tuning in, this is the list of recipes I prepare for Thanksgiving:

I’ve been posting them as a daily series this week in case anything on that list catches your eye or tempts your taste buds.  Here’s the recipe some of you have been waiting for: 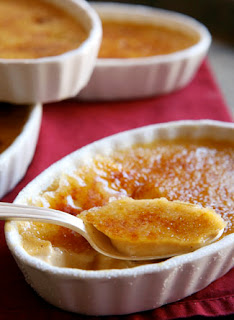 Pumpkin Cognac Crème Brûlée
Makes 8 servings
Ingredients:
Directions:
Preheat oven to 325°. Place 8 (6-ounce) ramekins or custard cups in a heavy-duty roasting pan.
Heat whipping cream to just under a simmer in a medium saucepan over medium heat (I usually do this in a double boiler to ensure that the cream doesn’t scald). Remove from heat.
Combine remaining ingredients in a large mixing bowl, whisking together just until smooth. Gradually whisk in hot cream.  It’s important to do this gradually, you don’t want the cream to curdle or the egg yolks to cook into lumps. Pour mixture through a wire-mesh strainer into a pitcher.
Divide custard evenly among ramekins. Fill pan with hot water to a depth of 1 inch. Cover with aluminum foil, crimping around edges of pan. Bake 45 to 50 minutes or until custard is barely set and jiggles when shaken. Remove ramekins from water bath, let cool, and chill 3 hours or up to 3 days.  Make sure they’re cooled completely before putting them in the fridge – they’ll form condensation over they’re still a tad warm.  If they do form condensation, not to worry, just pat them lightly with a paper towel to absorb the moisture before the next step.
Remove from refrigerator. Sprinkle surface of each custard evenly with 1 scant tablespoon sugar. Caramelize sugar with a kitchen blowtorch, moving flame quickly back and forth across custard (this is the fun part!). Let cool 2 to 3 minutes before serving.
Note: If you don’t have a kitchen blowtorch, broil 3 inches from heat 2 to 3 minutes or until sugar caramelizes.  Watch it closely, though, it can burn and you don’t want the custard to have a chance to heat up, either.
For a nonalcoholic version of this dish, simply leave out the cognac; you’ll lose depth of flavor, but the custard will cook the same. Do not substitute pie filling for the canned pumpkin and spices. Prep: 15 minutes; Bake: 45 minutes; Chill: 3 hours.
******************************

PN:  “You are in a computer game. Picture this…you’re a bird and your’e flaring your wings.  That’s why there’s the part about ‘flare’.”

Me:  “But wouldn’t that be called a flaredream?”

PN (rolling her eyes and shaking her head):  “No.”

PN:  “Because it’s like a long winged bird flaring its wings.”

She led me to the living room, where she lay on the couch and pretended to be asleep.  I waited to see what the ‘flare’ part was, but… nothing.

She leaped up, jumped on the couch, her arms flung wide and screeched like a bird.

Me:  “Ahhh…OK, I think I got it.  But why do you call it flareMARE instead of flareDREAM?”

Don’t forget to visit Mrs. 4444 at Half Past Kissin’ Time for fun Friday Fragments and Ann Again and Again for VGNO.