WooHoo! It’s Tuesday so that means I don’t have to be coherent since my brain isn’t functioning in coherent mode today. The instigator of this wonder is none other than Keely – No Doubt she’ll have some awesome randomness today considering she was truly doing an Un-Mom thing and going to a concert with girlfriends last night. Hopefully her fears about leaving her little one home alone with his daddy didn’t interfere with her partying like a rock star. But when you go over to her blog, be sure to speak softly and don’t turn on any bright lights…you know, just in case.

Two Tuesdays of having to do my Random Tuesday Thoughts on the fly while traveling was two Tuesdays too many. Well, not really, but it sure is good to be in mid-80’s weather instead of 112+ and if it’s too hot I can flip on the air conditioning and enjoy the cold blast. And this week I’ll get to stalk visit all the other participants – I’ve had Random Tuesday withdrawal not being able to get around to as many players as I can. So I’ll get my fix today.

I’m still nursing a nasty sinus infection, but I did call my doctor’s office again last week and asked for my doctor to call me personally so we could chat. She finally called Thursday evening, and agreed to call in a prescription of antibiotics to be picked up last Friday; as long as I promised to keep my appointment tomorrow so she can get her office fee and co-pay make sure everything is OK. I’ll humor her – besides, I am starting to feel better, so that means I was right. And maybe next time there won’t be the insistence of me coming in when she saw me less than a year ago. Many of you have recommended CVS’s Minute Clinic – unfortunately we don’t have those here…I sure wish we did, sounds like a convenient get out of jail by avoiding the doctor place.

I forgot to mention the monkey we saw while on vacation…our friends have a neighbor that has a genuine pet monkey. They had been regaling us with stories about this monkey, making sure we kept a close eye on our dogs because their natural curiosity and the monkey smell might lead them over there. The monkey is apparently not so friendly with other animals – dogs he’ll tolerate, but they get too close he’ll pick them up and throw them out of his personal space (sometimes injuring said dogs). For some reason he has something against cats – he hates them with a passion and simply snaps their necks. I pictured this ginormous ape or gorilla and wondered how people would be allowed to have such a pet.

We wandered over there on the 4th and did the neighborly thing and asked the owner if we could take pictures – he was very nice and told me to take as many pictures as I’d like…so I did. He was a little shy at first – when he finally came out of hiding he wouldn’t look in our general direction: 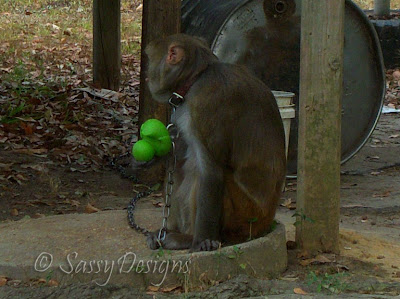 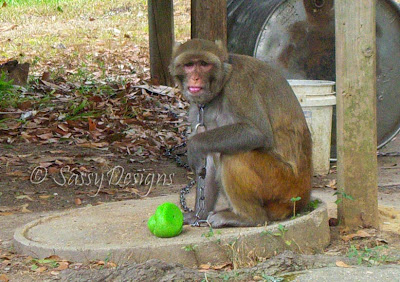 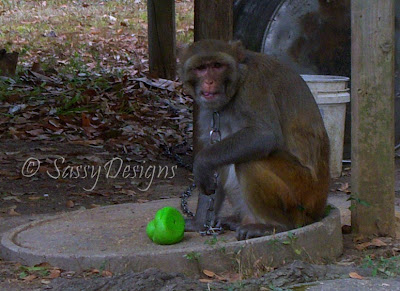 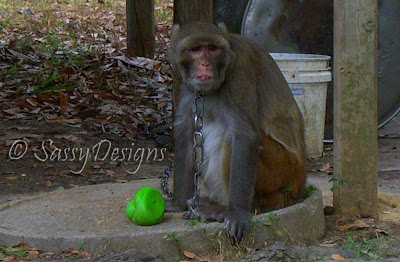 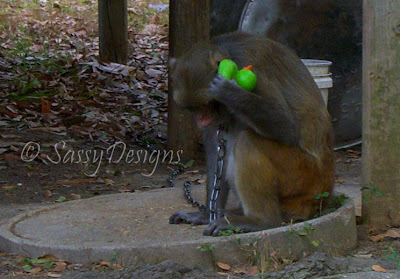 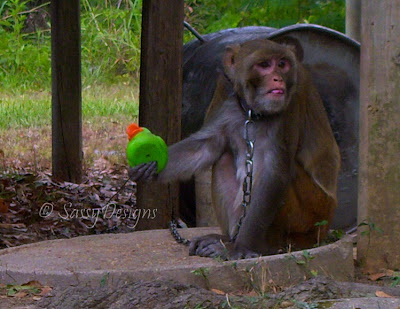 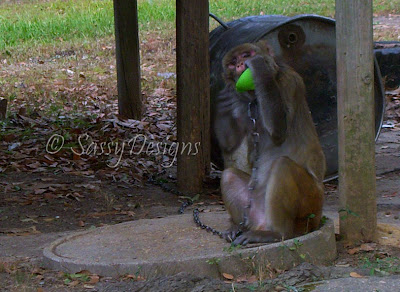 Yes, he’s playing with a funky large green rubber ducky – he’d hold it up to his ear, squeak it, then make a face and bite it…over and over again. Then he just made faces at us because he could: 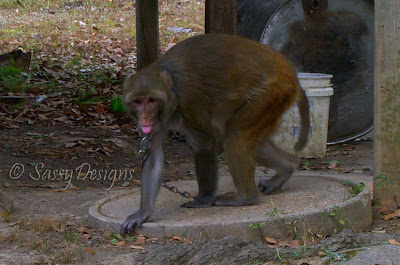 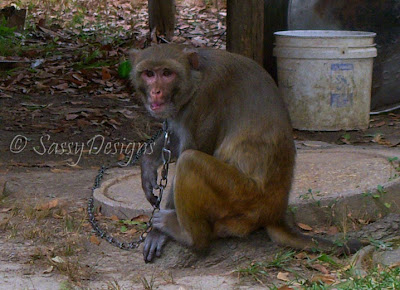 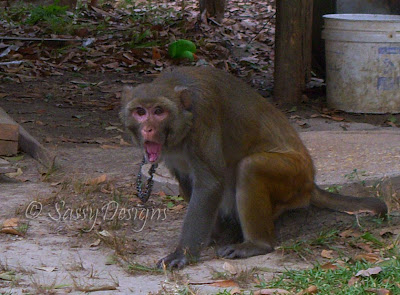 We didn’t get very close, and made sure the kids stayed a safe distance… It was………. interesting. ‘Nuff said.

Moving on…I’m currently in a conundrum trying to figure out which camera to get…I’ve been poring over the reviews and specs and all that jazz…and I’m still waffling between the Nikon D5000 and the Canon T1i.

Every time I think I’ve made up my mind, I read a different review that sways me in the other direction. So if there are any camera aficionado’s out there, let me know which one truly is better than the other. Please.

Did you know that Spanish is the opposite of English? Me neither. I was busy in the Summer House reading blogs on Saturday when the intercom rang…it was the Princess Nagger:

PN: “He’s playing Jak & Daxter – I made it a little complicated for him…”

Me (snickering): “You made it a little complicated for him? How so?”

PN: “I changed the language to Spanish!!”

Me: (laughing and coughing)

PN: “I decided to make it more challenging and change the language so now everything’s coming up Spanish!”

Me (gasping for air) “That’s too funny!”

Feeling Random? Then head on over to the Un-Mom for some awesome randomness. Get your Random on and join in the fun…you won’t be sorry!