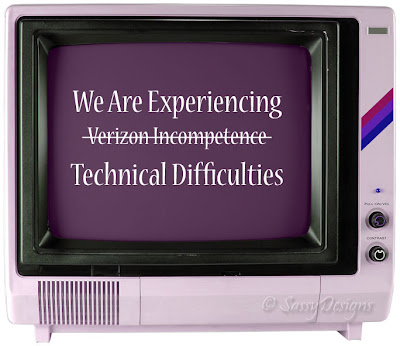 I’m keeping this short for once because I am sitting in McDonald’s taking advantage of their free wifi connection since our internet and phone service at home is deader than a doornail.

It suddenly went out yesterday afternoon right in the middle of my precious blog-hopping time and while I was working on a couple of posts (including one for the VGNO that I was so looking forward to participating in). That also means I’m going to miss out on tomorrow’s Quotable Sunday since I usually write those posts on Saturday to schedule the upload for early in the morning… *sniff!* Not to mention already being behind on my visits – trying to get caught up before we head to Louisiana in a week-and-a-half.

Verizon has been less than accommodating – I got bounced from department to department in various phone calls to them from 3pm until about 10pm last night. At one point I was able to speak to someone in the ‘repair’ dept. – they originally told us the earliest anyone could come out and look into the problem would be next Friday.

Now I really wish I had bought a blackberry or iPhone or something similar so I could have access online in spite of my internet connection. In case you are wondering, I am really, really mad. But I won’t bore you with the details until we’re back online – I did speak to a supervisor who worked some magic and someone will (hopefully) be out on Monday afternoon to fix the problem. Time will tell.

Meanwhile, talk amongst yourselves and I’ll catch up with you when I’m back online. Send some good thoughts my way if you don’t mind – I could sure use some right about now! 🙂

*unless we’re in the Caribbean drinking Pina Colada’s and sitting on the beach soaking up the warm sun…then we’d give up internet for an entire week, no problem!

20 thoughts on “So Mad I Could Spit Nails”