Since my brain seems to be in a PMS fog this morning and so many non-computer and non-blog related things are going on all at once, I thought this was the perfect time to hop on Scary Mommy‘s band wagon with Flashback Friday. I love her description of Flashback Friday here:

“You know those posts that you wrote way back when only your mother was reading? The ones you wish actual people had read? That’s what Flashback Fridays are for. Don’t have any? How about that old story or photo that you could never find a reason to post? Republish it today, grab a button from my sidebar, sign Mr. Linky and play along! Don’t be shy! I’d love to see what you’ve got…”

So here I go… The following is one of my first posts I did when I started this blog back in September – I had spent the day copying my old (and sporatic) blog posts from my MySpace account and my TV.com blogs since I decided it was time to join the rest of the blogosphere and mainline my blog instead. I thought this post would be the perfect Flashback Friday submission since it’s about Princess Nagger’s first week in school – and there are now only 4 school days left before she’s done with Kindergarten.

This was originally posted on September 6, 2008:

5+ Years at the Speed of Light

So I’m sure you’ve noticed that I have a ton of postings on my blog today – only because I’ve had them posted at random locations (guess that’s appropriate for my Random Thoughts! LOL!) but now I’ve been sucked into posting my blog(s) onto a more visible forum, so I guess that means I’ll have to be a bit more dedicated in updating it on a daily basis…that’s a challenge I look forward to! So my earlier posts have all been about Quality Television incited by the brutal cancellation of one of my all-time favorite shows from the 2007-2008 season, Journeyman. >sigh!<

But a new season arises, life goes on and my focus has shifted to write more about my Angelic daughter, the Princess Nagger – my miracle baby who is not a baby anymore, who will be 6 in November, and who just started Kindergarten a week-and-a-half ago… Where in the world does the time go??? It seemed like just yesterday she made her amazing arrival, just a little bundle of literal joy…and now she’s in school?

Her first day of school (August 27th, to be exact), was a bit melancholy for my hubby and me – he even took the day off for this amazing event, so he could be here to see her off at the bus and be here when she came home. She’s been assigned to the afternoon class – the local school only has 1/2 days for the Kindergartners…my preference would have been morning class, since I’m a morning person, but I’ll adapt to this inconvenient schedule! (grin!) Besides, when I got ‘the letter’ with her teacher/classroom assignment mid-August, and I lamented the afternoon assignment, my daughter pipes up: “That’s OK, Mama – afternoon class is better for me since I’m not a morning person…” I laughed and gave her a big hug – she’s right, she, like my hubby, is not a morning person…I’m alone in our household in that regard! (snicker!)

Her first day she was resistant to going to school – did NOT want to go, kept saying she was “not looking forward to it” and no matter how much I acted as cheerleader to encourage her that she would have fun, she was having none of it. She pouted as I got her ready, made faces and goofed off for her ‘first day of school’ pictures, and dragged her feet as we walked over to the bus stop, resigned to her fate. While she was gone, my hubby and I reminisced about when she was ‘just a blob’ and marveled at how fast the time has flown by. We decided to do the yard work to keep busy, he using the push mower, me running the tractor. Before we knew it, it was finally time to sit out on the front porch and await the arrival of the bus. When our daughter got off that bus, she was a changed person – she LOVED her first day of school, already made a new friend named Jasmine, and was excited about going back the next day – so excited, in fact, that my ‘non-morning person’ daughter actually got up at 6:30 a.m. the next day and could not wait until it was time to go out and wait for the bus!

She’s had a great time her first 7 days of school – they have a ‘system’, where they give each child in the class a set of 4 blocks…if they break any of the rules (called ‘S.M.A.R.T.’, with each letter describing the rules, like no running in the class/school, don’t talk out of turn, etc.), they lose a block one-by-one. If, at the end of the day, no students have lost a block, they get to put a squishy ball into a jar – once the jar is full, they get a special treat (extra recess, a movie day, etc.). I wondered how long it would be before my precocious daughter would lose a block…it took her 4 days to do so – and it was apparently at the very end of the day, just after the class had been ‘dismissed’. She apparently challenged a couple of her classmates to ‘tag’ each table in the classroom – which resulted in her leading the way running to tag each table…and running in the classroom is a no-no, so she got busted! LOL!!

And then there was the ‘bus incident’ – apparently my hubby and I worrying that our daughter could possibly have trouble with her socialization skills (being that she’s an only child, and where we live, there are no kids her age for her to play with…and our friends who have kids had their kids much earlier, so their kids are quite a bit older, though our daughter has no issue playing with the older kids, they, however, find it ‘lame’ to play with a 5 year old! LOL!) At any rate, when the bus arrived to drop her off, I was thrown into panic mode because my daughter was not on the bus. The bus driver was on the radio with the transportation department, being notified that my daughter had gotten off at the wrong bus stop. I had to return to my perch on the front porch and wait for the bus driver to go back and get her – all the while horrible thoughts teaming through my head on where she was, who was she with, is anything bad going to happen to her.

While I waited and tried not to break down in tears, I called the transportation department myself to find out more information. Evidently my daughter was sitting with a group of new friends on the bus, and was invited by one of the girls for a sleepover at her house – which my daughter graciously accepted and followed her off the bus. Keep in mind that the school has made a big deal out of the fact that they will NOT allow any child to get off the bus unless a person from the previously mandated ‘approved list’ is waiting for that child. So how did my child manage to be ‘allowed’ off the bus at a stop that isn’t hers, and to someone who is not on that list? That issue is still being addressed by the school…

After an excruciatingly long wait, the bus finally arrived back with my daughter on board. I sat her down for a serious heart-to-heart and asked her how she managed to get off the bus at the wrong stop. She said she got off the bus when the driver wasn’t looking…and that a little girl had invited her for a sleepover, but her mom said no because it’s a school night. Luckily the mom called the school immediately, which is why the driver already knew when she arrived at our stop where my daughter had gotten off and was instructed to go back and get her. Princess Nagger understands that she is never allowed to get off the bus at a different stop than her own, that if there are sleepovers and play dates arranged, she’ll come home first and I’ll take her wherever she’s going. Rather than worry that she wouldn’t be able to hone her socialization skills early, I guess my hubby and I will be worrying that she’ll be too friendly and get herself in trouble….not good!

On a lighter note, to end this excruciatingly long post (grin!) check back in a few days – I’m going to be updating like a madwoman and will be adding the back story on me and my Miracle Baby – who constantly reminds me that she is no longer a ‘baby’! 😉

For today’s post, I’m adding the pictures of her First Day of School – these weren’t on the original post, but I’ve learned since then that visual aids are always a good thing… 😉 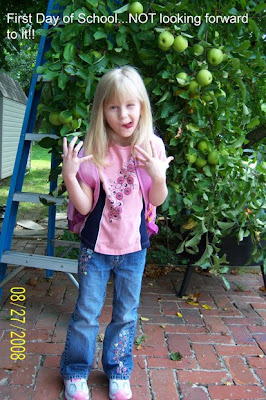 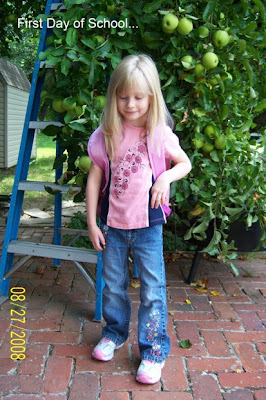 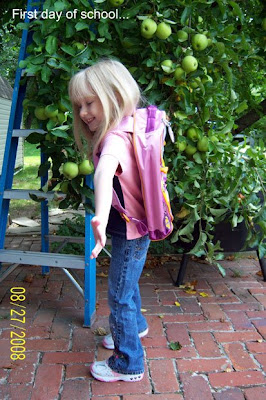 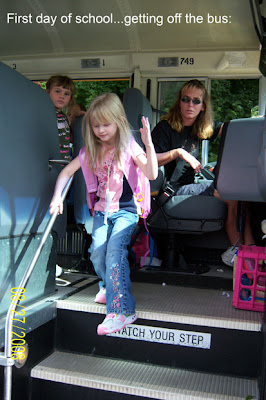