Keely put the ‘Un’ in The Un-Mom and that’s why we like her so much. But Shhhhh! Don’t tell her, we don’t want her head to swell or she might not be able to fit into her Ninja mask for her Febreze moments and that, my friends, would be a tragedy. Seriously.

I’m still waiting to hear what method of torture my mail carrier will endure for destroying the plants she was paid to deliver safely last week. I’m guessing that even though our new phone number was listed on the formal complaint that the Postmaster hasn’t been able to call because he still has the old number. Yeah, that’s what I’m going with. Verizon conveniently forgot to add the recording with the new number when they mechanically tell you that the number you have dialed has been disconnected. So I suppose I’ll call and follow up, but I want them to stew just a little longer.

Mother Nature threatened us with thunderstorms this weekend, so we got out early on Saturday and got all the yard work done. I ran the tractor in the Back 40 beboppin’ to my tunes on my ZEN. Yeah, I know, it’s not an iPod, but it’s pretty cool and does the job. As long as I make sure I synch it with Rhapsody before I go out to run the tractor…otherwise, all the songs I’ve downloaded show a synch error and I’m listening to silence. While silence is a precious commodity around our house, being able to zone out to my favorite music without interruption is even better. I even go around in circles for a while after the grass is completely mowed…you know, to make sure I didn’t miss any spots so I can finish listening to a favorite song or three. And stretch out that uninterrupted time alone in the sun. Heaven.

We did get one bout of thunder storms late Saturday, lots of lightning and rolling thunder, but no rain, so the heat Mother Nature decided to hit us with remained. Luckily we did get around to putting in the air conditioning units in the bedrooms so we could actually sleep comfortably. We looked into getting central air installed, but with 3 stories to cool down, the quotes came in just shy of $30,000. Um yeah, I think we’ll pass, the window units work just fine and central air will just be another thing added to our ‘wish list’ for our next house.

Since the ‘cooling’ thunderstorms never arrived (until this morning), we were able to spend even more time outside in the heat. Poor Princess Nagger kept wandering around yesterday outfitted in her bathing suit and inflatable Looney Tunes swim vest waiting for the neighbor’s pool to empty of raucous drunk people so she could go for a swim. They generously offered up to her the opportunity to swim in their pool ‘anytime’, which is great except one of us has to be with her because she can’t be in that huge pool by herself – or with raucous drunk people, either. I nominated hubby for that task because no way am I donning a bathing suit this early in the season…not before a few more rounds of abuse from Maya, anyway.

Princess Nagger is in a growth spurt. Every 10 minutes or so yesterday she kept saying she was hungry, then she’d help herself to ham and cheese or cheetos or frozen pops. 5 minutes after I fed her lunch she was hungry again. Oh to have that kind of metabolism again. I went in to check on her about 10 minutes later and caught her making herself a jelly sandwich. Not one, but two. Of course she told me she was making one for me, too. And of course I had to eat it, you know, because I didn’t want to hurt her feelings. 🙂 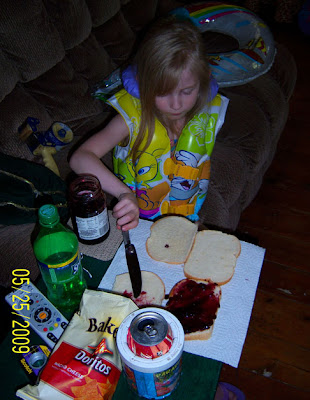 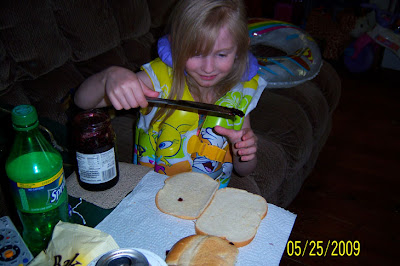 Hubby has been wanting to put in some sort of stream in connection to our pond…we have plans to add a rock garden in the section of sparse grass that represents the yard between the shed and the Summer House, and had thought about adding a smaller pond in that area and connecting the two ponds with a stream. But he got a penchant for putting in a stream sooner than that, especially when he discovered a section of pond liner stored in our barn…so he dug a trench from the flower bed at the base of the apple tree to the pond and has started this summer’s project early. 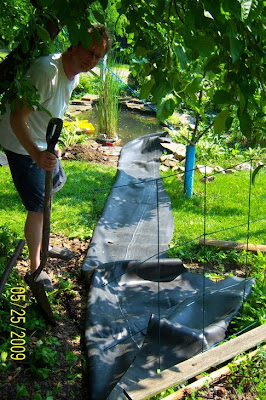 He ran some black tubing up from the pond that generates the water out of the pond up to the top of the ‘stream’ which then runs back into the pond. Here’s how it looked when he got done with that part: 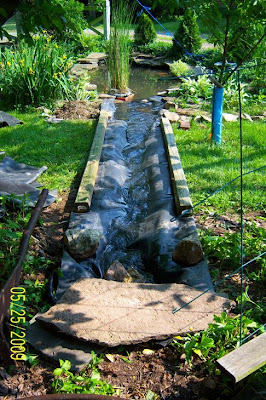 It’s raining this morning, so some leaves have fallen into the stream already, and the locust tree that is more of an annoyance than anything has deposited a lot of debris into the pond, but you can see that hubby added some pebbles in the bottom of the stream: 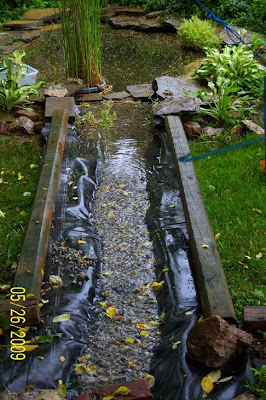 Next steps will be to plant some sort of plants on either side, create a little water bog at the bottom of the stream at the entrance of the pond, remove the timbers, and cover the rest of the pond liner with white rock. Stay tuned, it should turn into some major coolness. It’s already cool being able to hear the babble of the stream. Plus it will give the dogs the perfect water source during the hot summer days since the invisible fence prohibits them from rolling in the plants around the pond or standing on the shelf just inside the edge of the pond doggy fishing.

I suppose I should wrap this up since my computer decided to reboot itself in the middle of my randomness…guess it’s a sign that I need to shut up. 😉