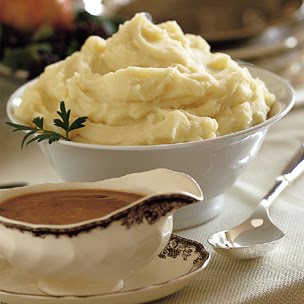 This recipe serves 8 – I double it if we have 15 for dinner.

Peel the potatoes and cut them into uniform chunks.  Yukon Gold are my potato of choice because they have a natural buttery flavor.  Or redskin potatoes tend to be the winner since they do make awesome mashed potatoes – and often times I’ll even leave the skins on.

If you want to release some of the starch, soak your cut potatoes in a bowl of cold water for an hour or two – but that’s not a necessity and I usually don’t.

Place the potatoes in a large pot, add cold water until they’re covered about an inch over.  Bring to a boil, and once it’s boiling add salt to the water (you can choose not to add salt to the water, but apparently doing so increases the chance of better mashability and fluffy goodness).

Drain into a colander, then dump them back into the hot pot.  Let sit for about 5-10 minutes to ‘dry out’ a little more (Tip: For fluffier potatoes, cover the pot with a double thickness of paper towels, then cover with the lid. In ten minutes, steam will be absorbed by the towels and your potatoes will be dry and fluffy.)

Now it’s time to start mashing.  You can use a ricer, or a food mill, or do it the old-fashioned way with a potato masher.

Mix in the cream cheese, sour cream, onion powder, salt, pepper, and butter.  (Note: The measurements for the salt, pepper, onion powder and butter is just a baseline – I usually add to taste rather than measure.) Sometimes I’ll use my hand mixer at this point to make sure they’re ultra smooth, especially if I’ve used a potato masher and my arm is tired.  But be careful, over mixing them will make them gummy.

Transfer to a large bowl and cover.  Refrigerate overnight.

If you want to heat them up in your oven, preheat oven to 350 degrees F (175 degrees C).  Lightly grease a medium baking dish and spread the potato mixture into the dish.  Bake in the preheated oven for about 30 minutes.

Or, do what I do – since the turkey is taking up all the oven space and some of the other side dishes others bring as their contribution need some time in the oven while the turkey is resting, use a slow cooker or crock pot.  I spray the inside of my slow cooker with cooking spray (virgin olive oil, to be exact), and transfer the potatoes into it.  Cook on warm or low for 3-4 hours, stirring occasionally.

To make them a little more ‘healthy’, I use light cream cheese (the fat free just doesn’t seem to have the right consistency, so I use the 1/3 less fat), fat-free sour cream, lemon pepper instead of the salt and pepper, and real butter.  When I place the potatoes in the crock pot, I add a few more pats of margarine and a splash of fat free half-n-half (but not too much – the moisture from the crock pot will make them a tad bit runny if you’re not careful!)

Everyone raves about these mashed potatoes, and I have to make it every year or I’d have some very disappointed dinner guests.

There’s always the question of boiling potatoes – to start the water boiling first or not.  Not is the best way – if you start the water boiling first, the potatoes tend to cook too fast on the outside and the inside has to catch up, which makes for either lumpy or mushy mashed potatoes.  Oh, and the reason I add salt to the water after the water is boiling is because salt increases the boiling level of the water, and believe it or not, if you salt the water first, it takes longer for it to finally come to a boil.

These can be made up to 2 days ahead.  I usually slate the day before Thanksgiving as my day to do the ‘ahead’ stuff – that way on Thanksgiving while the turkey is cooking I can focus on any last minute things and set the table.  That, and as the dinner guests start arriving, I can be socializing and drinking wine instead of slaving away in the kitchen.