Happy Monday! I don’t know about you, but this is my least favorite time of year, when we get that hour of time taken away. I never seem to catch up again until we get that hour back in the fall. I might need to move to somewhere that doesn’t do the whole time switcheroo spring and fall! But it is Monday, and Monday means music – which will help chase away the one hour less of sleep cobwebs, am I right?

For the month of March, our Spotlight Dancer is our friend and the Brainchild and leader of the fabulous Monday’s Music Moves Me – our very own Marie from Xmas Dolly! The theme selected for this week is “Build a playlist of old rock & roll songs.” The word ‘old’ is all in perception, right? So ‘old’ to me might not be that ‘old’ to you, but I promise you’ll have fun. Let’s get this rock’n’roll party started, shall we?

Let’s start with a 1976 lead single from this group’s debut album, which sold a whopping 17 million copies, and is considered the best song this band every produced. Notably, in popular culture, the song is certainly one of the most popular rock tunes ever; it can be heard in seemingly countless movies, premium channel series and TV shows.

Fun Fact: Anytime my brother and I would play trivia games with our friends, and the question was about music groups, my brother’s then girlfriend now wife, would always give this bands name as her answer for every question – it was always hilarious, especially when the answer finally was this band. 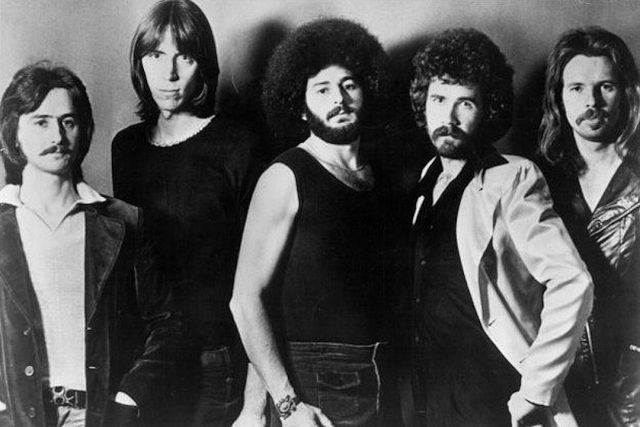 Give a listen to Boston with “More Than a Feeling”:

Next up is a song that has a story within a story. It’s about a young man who waits for hours outside a concert that sells out before he can buy a ticket. Hearing the music inside, he has an inspirational moment and hopes to become a juke box hero, a goal he eventually achieves.

Then one day this same guy spots another young man standing outside the stage door of one of his concerts, then invites him inside and shows him around backstage. The co-writer of the song said it’s based on a true event: he waited in line to see Jimi Hendrix, but the gig was sold out.

This single reached #3 on for the US Billboard Mainstream Rock chart and eventually sold over a million downloads.

Next up is a song that is one of the few songs this artist didn’t write. Although he worked on the lyrics, he didn’t take any songwriting credit. This means that the artist doesn’t own the publishing rights to the song, and the writers actually control when it is used in movies and commercials.

According to the artist, he was feeling generous that day, and says not seeking composer credit was “the dumbest thing I ever did.” He claims he changed all the original lyrics except for the “old time rock and roll” part. He made sure to take a dig at disco music, which was fading in popularity.

This was used in the 1983 movie Risky Business in a famous scene where Tom Cruise dances to the song in his underwear. This scene quickly entered the zeitgeist, leading to parodies, tributes, even Halloween costumes. The artist is OK with having his song closely associated with an underwear-clad Cruise – he says he gets a kick out of it.

This was also used in a commercial for Friskies cat food, with the lyrics changed to: “Just take the Friskies off the shelf, your cat can eat them all by himself.” It was later used in popular commercials for the video game Guitar Hero, which parodied the Risky Business scene. 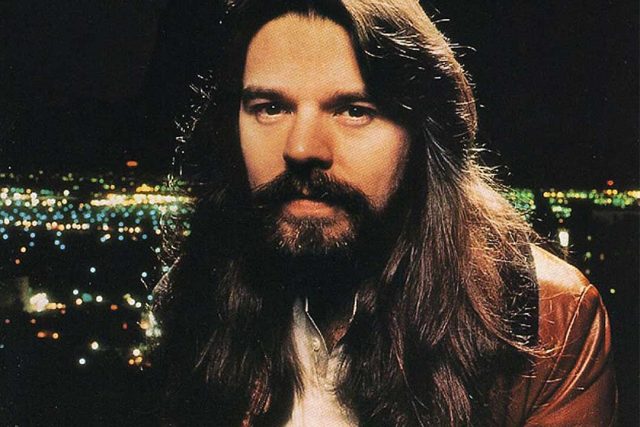 Last, but certainly not least, is a song that is based on the original artist’s life. It tells the tale of a boy with humble beginnings with a talent for guitar. Some details were changed: the artist was from St. Louis, not Louisiana, and he knew how to read and write very well. He graduated from beauty school with a degree in hairdressing and cosmetology.

The line “that little country boy could play” was originally “that little colored boy can play.” The artist knew he had to change it if he wanted the song played on the radio, and he didn’t want to alienate his white fans, who could better relate to the tale of a “country” boy.

The artist got the name “Johnny” from Johnnie Johnson, a piano player who collaborated with him on many songs. Johnson often wrote the songs on piano, and then the artist converted them to guitar and wrote lyrics. The artist joined Johnson’s group, The Sir John Trio, in 1953, and quickly became the lead singer and centerpiece of the band.

This song is a great example of the care and precision the artist used when writing and delivering his lyrics. He wanted the words to his songs to tell a story and stand on their own, and took care to clearly enunciate so listeners could understand them.

This was featured in the 1985 movie Back To The Future. Michael J. Fox’ character goes back in time and plays it to a stunned crowd as Marvin Berry looks on. Marvin rings his cousin, Chuck, saying that he thinks he has found the new style he is looking for, then points the telephone so that it catches most of the music coming from Marty McFly. This scene produced a classic line when McFly comes on stage and tells the band, “It’s a blues riff in B, watch me for the changes, and try to keep up.” 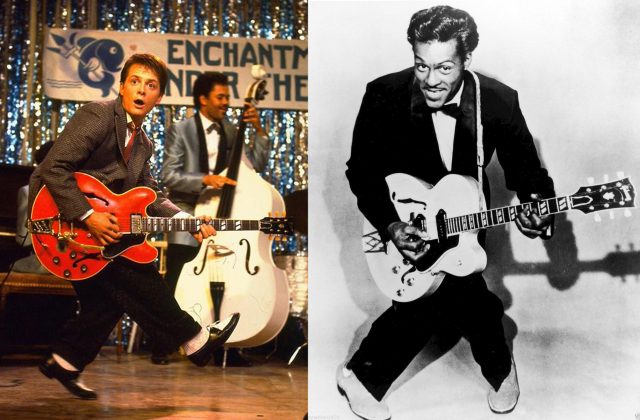 5 thoughts on “it’s More Than a Feeling like a Juke Box Hero playing Old Time Rock & Roll for Johnny B. Goode”