Hello Tuesday! Again. Wasn’t it just yesterday it was Tuesday? No? Ah well. I blinked. Again. And I’m late again – sorry about that! Better late than never, right??

Anyway, last week I was indeed successful in obtaining all of Little Dude’s school supplies for when school starts in a month-ish. I did find out that his new school starts early, which boggles my mind, because when I grew up here in Washington State, our school always started the day after Labor Day.

So it was odd, when Princess Nagger was going to elementary school in Pennsylvania, she’d start the third week of August (or around the 22nd, whichever week that landed on that calendar year). But she was done by Memorial Day (barring any extra days off during the year for that thing called snow).

Here they don’t finish school until the second week of June, so it is a trade-off. Which is why I was a bit taken aback when I saw that Little Dude starts the last week of August instead of after Labor Day, but still doesn’t get done until mid-June. I know, right?!

Turns out, because he has so many ‘early dismissal’ days and and multitudes of extra days off during the school year, that explains the early start, late finish thing. Good thing I found a bonafide flexible job – when inputting all the early dismissal days and days off in my phone calendar, I got dizzy.

Because the hubby’s summer break doesn’t start until the week before Little Dude goes back to school, we weren’t able to do a full on ‘vacation’ for the summer. So instead, we’re doing here and there camping and whatnot.

Next year, though, we’re going to make plans for a cross-country trip to visit my sister in Kansas, my bloggy friend in Arkansas, and our friend in Louisiana, and of course my BFF in Nevada. I’ve already mapped out the road trip portion, just have to finalize dates and make sure all are available for some crazy coming into town.

Of course that all also hinges on how my dad is doing by then – he’s hanging in there, but he’s been transferred to another adult care home, having good days and bad days. He’s a stubborn old coot – I get my mile-wide stubborn streak from him – apparently he has fallen twice while in that home, and re-broken his shoulder. Ouch.

The Alzheimer’s is really doing a number on him, too – while he recognized me when we last visited, he didn’t seem to recognize the hubby or the kids, and instead of visiting with us, he sat by the front door waiting for some mystery van to come pick him up. It’s hard to see him in this state, when I’m so used to seeing him so full of life and overly active, this sedentary persona just isn’t him.

Moving on… It looks like we’re on track to tie (and break the tie) with the most consecutive dry days here in the Pacific Northwest. For those of you who only know Seattle to be dreary rainy, I’m here to thwart that perception. Especially since the Northwest is one of the driest places in the country during mid-summer.

That being said, however, we’re usually limited to three or four 90-degree days during the summer months – check out what’s coming this week: 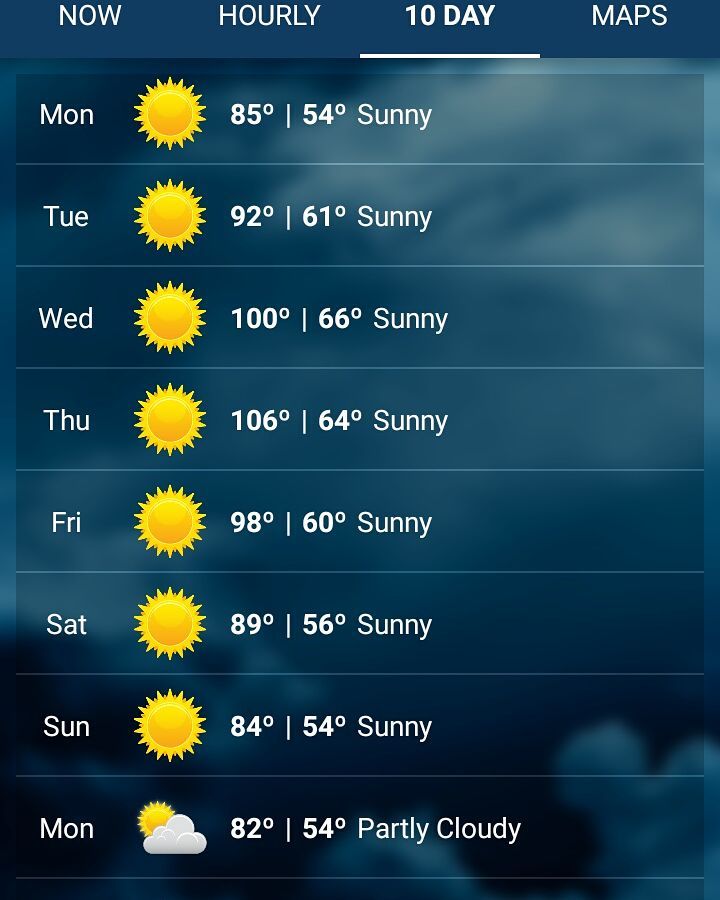 I know it’s been even hotter than that elsewhere, but this is definitely unusual for this area. And I’m kind of regretting not holding out for a house that has air conditioning installed.

It was one of the first things we did with our previous house, considering we suffered for 11 years in our house in hot/humid Pennsylvania with no A/C, but I still love this house, and being that we’re on top of a hill, I think that we might have some breezes as a saving grace. I’ll let you know how it goes.

I shared this on Facebook a while back, but in case you missed it, you have to check this out: 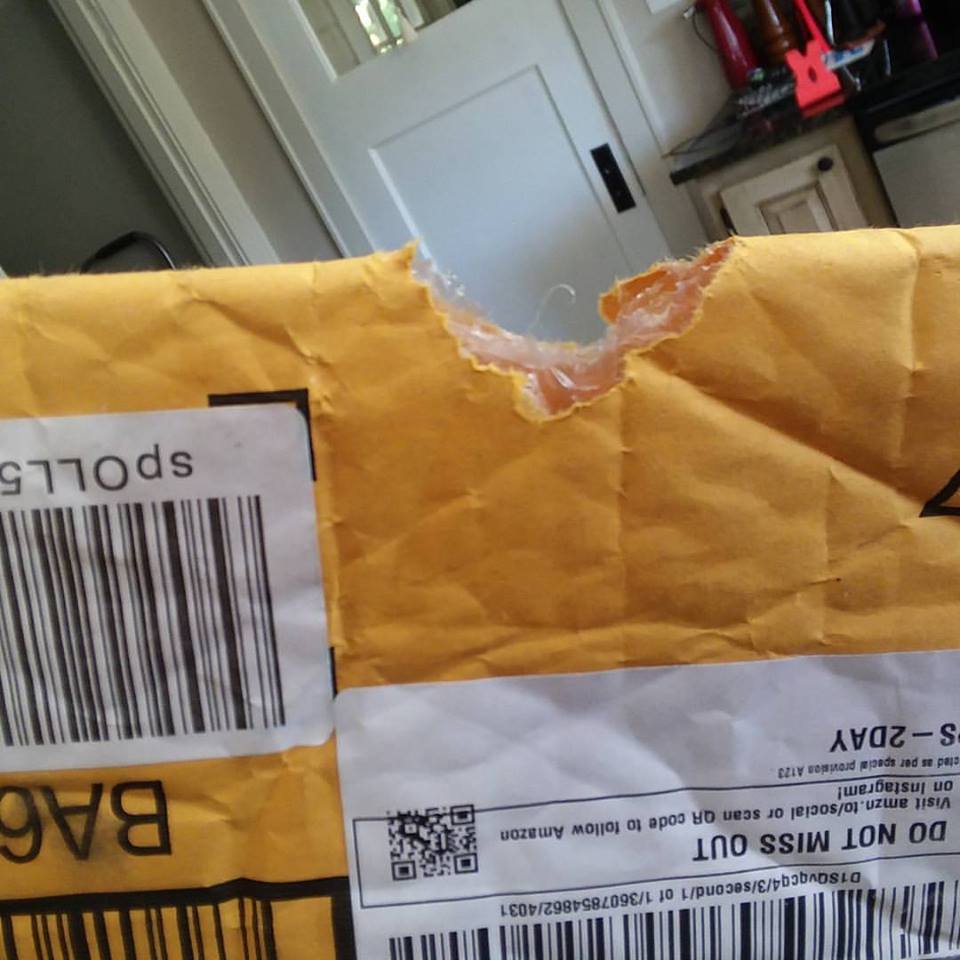 Apparently this was an intruder of a package… UPS left this on the back deck per my request, leaning up against the French doors, which sent our half-Wheaten half-Papillion, Reddington, into a barking frenzy. When I brought the package in, Reddington tried to save me from the evil, and took a perfect bite out of it.

I feel so much safer now.

Speaking of safer… For fun, I put a smallish box on the floor and waited to see if the kitties, who love boxes of all shapes and sizes, would squeeze into it, because that would have been a hilarious picture. Instead, they got one over on me by not squeezing into the box, instead they whacked at it until it turned on its side, then took naps in it. 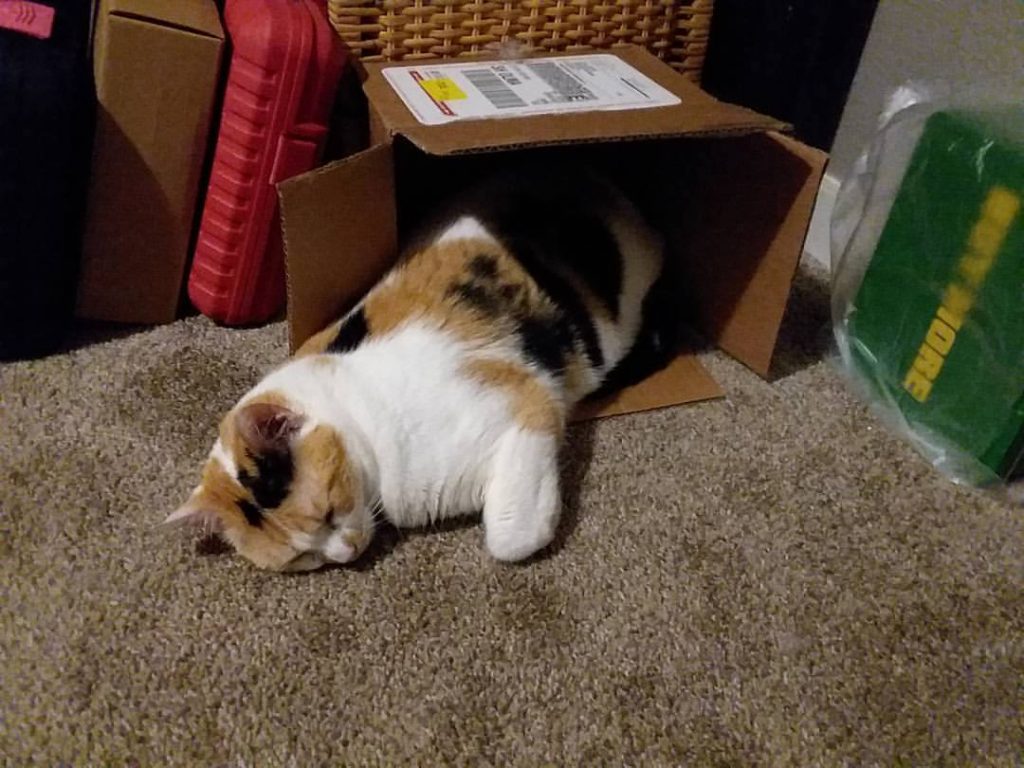 Usually Shorty (pictured), or her sister, Nautica, sleep with their head in the box, but this time Shorty must have wanted to keep an eye on things, because they hover when I’m wrapping things up for the night and make sure their food bowl is full. They pester me if it starts getting later than normal, because heaven forbid I forget to ‘shake’ their food bowl.

Yes, I have to shake it, because they apparently don’t know they can stick their paws in the feeder part and get the food themselves. Not too bright in the head. Or, they’re smart and have me trained well.

5 thoughts on “Random Weather, and update, plus some Papillon and Kitty Fun: Random Tuesday Thoughts”