Another week zoomed by way too fast – has anyone located the pause button, or figured out the art of not blinking? No? Alrighty then…we’ll just keep on going as if it’s Tuesday yet again! Oh, that’s right – it is Tuesday!

So here’s hoping all you mothers had a wonderful Mother’s Day – I sure did! The hubby got up early and cut some cool flowers from one of our flowering bushes in the front yard and had them waiting in a vase for me when I got up: Of course I forgot to take a picture of them that morning, so they’re a tad droopy, but you get the idea. Isn’t that sweet? Major props for thoughtfulness!

I also had a rare opportunity to have lunch with my mom and my sister, who’s been here for a couple of weeks from Kansas to help my mom with my dad. She’ll be here for another week, but getting to celebrate Mother’s Day with her and my mom was extra special.

I’m going to ignore the fact that the place we’d chosen to have our lunch didn’t let us know it was buffet only (and way overpriced at that), so since none of us are fans of overpriced buffets (or buffets in general), we left in the pouring rain and ended up at Applebee’s instead. There wasn’t a wait, the food was awesome, the service was spectacular and the company was the best ever. How was your Mother’s Day?

For my Mother’s Day gift, the hubby ordered a hydraulic lift table for my winemaking – I had sent him a link to the one I wanted, which was this one: 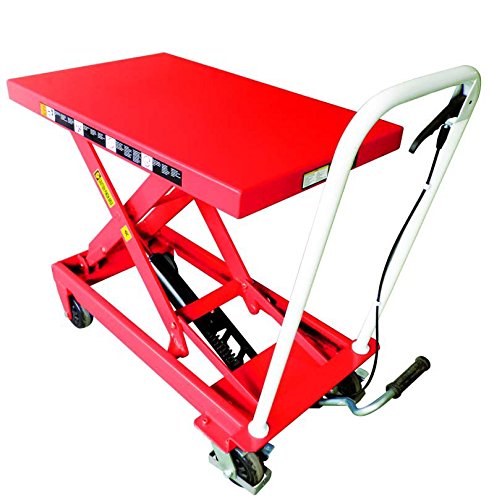 With that one, I can lift two full primary fermentation buckets or two full carboys at the same time to get them up on the counter. Sweet! Plus it’ll save my back lots of stress.

But when he went to order it, it was out of stock. Murphy’s Law! So he ordered a different one instead: 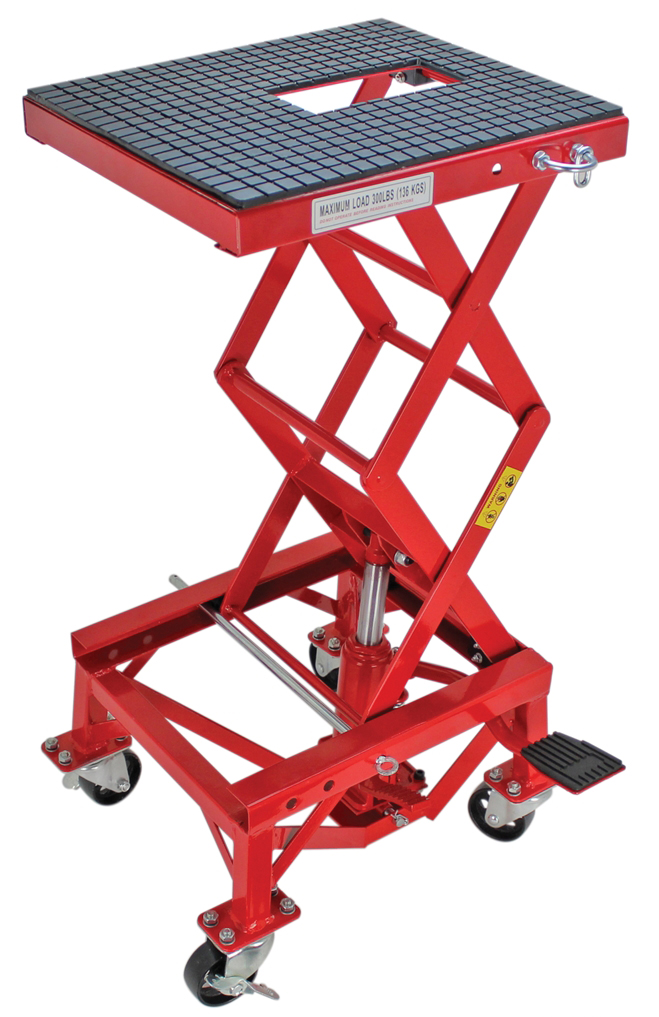 OK, so it’s a motorcycle hydraulic lift table – it could work, in spite of the fact that it only has half the surface space the other one has, plus that pesky hole in the middle. But you have to give the hubby points for trying! I was glad he’d ordered it from Amazon, because I knew that it would be easy to return to exchange for a different one.

FedEx kind of fast-tracked that whole return process for me, because they left the 70-lb box outside one of the garage doors (which is understandable – he obviously didn’t want to walk the heavy box to the front door, and since it was emblazoned with ‘motorcycle lift’ on the box, I’d assume it was meant for the garage, too) and the box was alarmingly trashed.

When I saw the box hanging around outside (good thing it wasn’t raining that day!) this is what greeted me: You can see right away the box had serious issues, and the FedEx driver left it on its side to ‘hide’ the torn holes in two corners. I flipped it upright to get a better look (and pictures): and noticed that parts of the lift table were sticking out of the shredded corners. Even though I’d already mentally decided I would be doing a return prior to setting eyes on the box, this definitely sealed the deal. There’s no way to tell, without taking it out of the box and assembling it, how many parts and hardware were missing.

Speaking of hardware, some had escaped from the box onto the driveway: Crazy, no? The only thing that was holding the box together was the plastic straps. I initiated a return right away, printed my free shipping label, then taped up the box (I literally had to tape the whole box, it was even blown open at the seams) and just wait for UPS to pick up the box for the return the next day.

I left a note for UPS on our front door so they’d know the (trashed and heavy) box for them to pick up was by the garage – I even apologized on FedEx’s behalf for the state of the box. UPS picked up with no problems, and the tracking number was active until it arrived at the sorting facility in Oregon.

There it sat, unmoving, for 8 days, so I called UPS to find out what the deal was, as Amazon was waiting to initiate a credit to my account after they received the item. UPS said that since it was passed the guaranteed delivery date to Kentucky, that the package was considered ‘lost’, and I’d have to call Amazon to have Amazon initiate an investigation with UPS.

Another round-robin of phone calls and Amazon did indeed come through with the refund even though the 70-lb box had mysteriously gone ‘missing’ at UPS’s sorting facility in Oregon. That is why I really do love Amazon – they come through in the clutch every single time.

Now it’s time for me to order a hydraulic table that will work, and the closest one to the original one I wanted will work (though it would have been cool to have it in red, but blue will suffice, as I can decorate it with Seahawks stuff if I choose to do so): I’ll let you know how handy it is when it gets here!

“I’m not jealous! What gets you turning green?“

Irish writer Elizabeth Bowen once wrote, “Jealousy is no more than feeling alone against smiling enemies.” This simple statement sets a perfect scene in our minds of what jealousy feels like; Others are happy, overtly joyful or secretly mocking, while we are left alone to look like a fool.

I can honestly say that I’m not really a jealous person – I might have a tad bit envy for those that can eat anything they want and not gain an ounce, whereas I have to watch everything I eat, and if I just look at something, I’ll gain 5 pounds. Working on that, though – my goal is to be at my goal weight in time for my birthday in December. And I’m right on track, so that makes me happy!

As for other jealousies – I can’t really say that I’m jealous of anyone for anything, really. I’m one of those people who are always happy for others and their successes or lives or whatever – and I’m not one to ‘keep up with the Joneses’, so there’s no urge to try to achieve what others have achieved. It could be that I’m old enough not to care – that’s a thing, right?

7 thoughts on “Mother’s Day Fun and Gift Brouhaha plus No Jealousy with Coffee: Random Tuesday Thoughts”