Of course we could do some more of this: 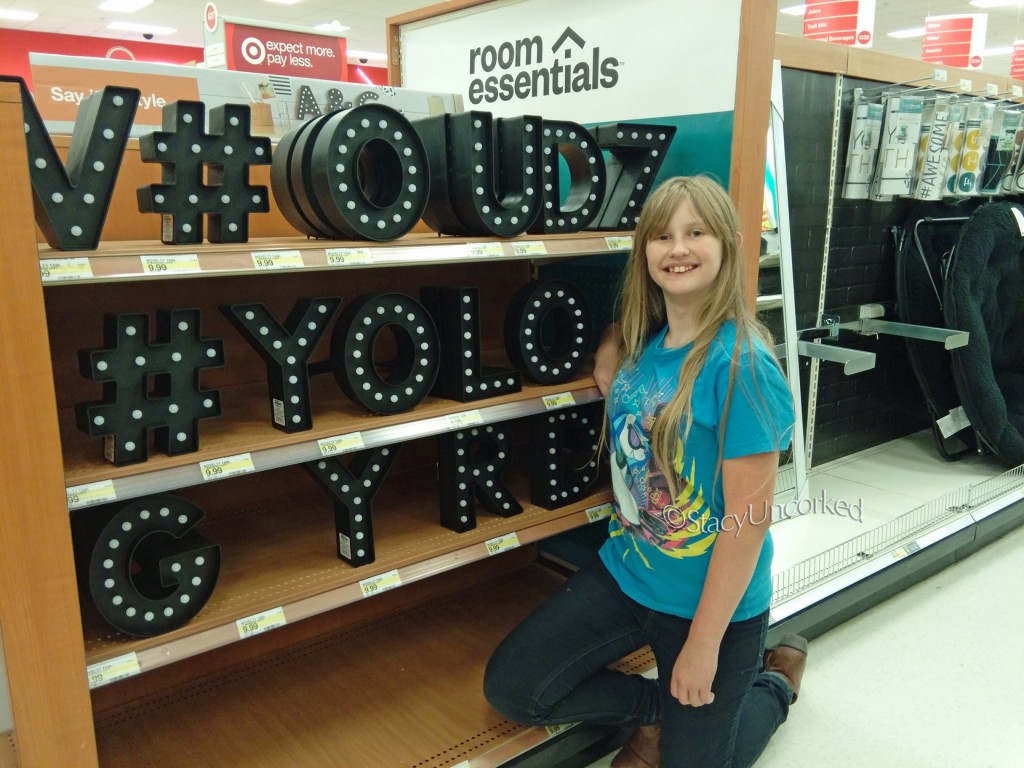 It’s nice to have more of a lackadaisical schedule without the rush-rush-rush of a typical school/work day, so there’s no complaining from me. Though check back with me by the end of this week and we’ll see if I’m maintaining my sanity level.

What hasn’t helped me maintain my sanity level was being misled by the door-to-door salesman who ignored our ‘no trespassing’ and ‘keep out’ signs posted in our driveway and convinced us to switch our internet and phone over to CenturyLink from Xfinity to save on our monthly bill and have higher internet speeds.

We were totally sold a bill of goods. Not only did they not disclose all the extra charges they added to the basic monthly charge, but they double-charge for taxes. They charge taxes individually for the internet service and the phone service. Why bother selling them as a ‘bundle’ then?

It was sticker shock when the bill showed up, plus we were told they’d wave all installation fees if we do the ‘self-install’, which for me is a no-brainer since I’ve done it before. Plus, that whole saving money thing. Well they still charged us an installation fee – a reduced one, but a fee just the same because it was for the phone, not the internet.

I think I figured out where all the bad customer service reps landed after they didn’t pass muster at Xfinity. They’re now apparently over at CenturyLink. Not only was I stonewalled and put on ‘terminal ignore’ for an extended period of time, but in spite of the misleading of the door-to-door sales guy, they refused to waive any of the extra charges added to the very first bill. 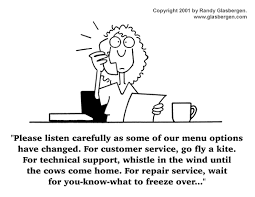 They also couldn’t explain why they’re double-charging on tax – they kept giving me a pat-answer of ‘they don’t control that’. I call bullshit. Especially when part of the verbiage is 220;Taxes, Fees, and Surcharges” – that portion of the bill is between 30 and 40-percent of the entire bill, the total bill was about $30 higher than we were told we’d be paying on a monthly basis.

The so-called ‘price lock’ for the first three years was no savings at all.

Was the speed faster? Hell to the no. This first month of service I’ve had to reboot the modem no less than three times a day. Often the signal is lagging and we’ve been annoyed with the constant little circle spinning and ‘loading’ happening when we’re trying to stream something.

Trying to navigate the internet has been a joke, more often than not we get an error message because the internet connection was lost. Again.

This really should be CenturyLink’s Logo: 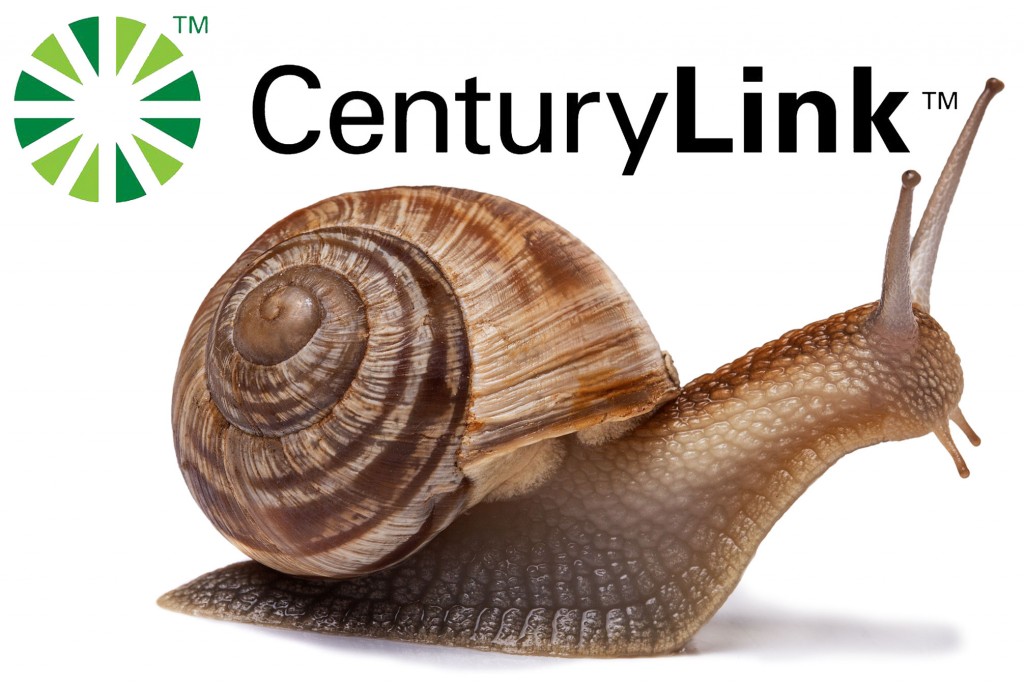 So yeah. We’re immediately switching back over to Xfinity, and even though the ink hasn’t quite dried on the previous bill from switching away  from them, they’re treating us like a new customer and giving us the bundled deal new customers can get that not only saves on our previous bundle through them, but the speed will be exponentially faster.

Luckily the switch-over is happening tonight (Monday) or tomorrow morning (Tuesday) so I won’t have to hear the Princess Nagger complaining about losing connection. And she won’t have to hear me say “Stupid Internet!” every half hour or so.

The moral of the story is when someone ignores the ‘keep out’ and ‘no trespassing’ signs out in your driveway and rings the bell anyway, just say “no thank you” and quickly close the door like you usually do rather than get suckered into listening to their sales pitch. No matter how cute they happen to be.

“Happy Easter! Tell me about the best chocolate ever. Or, if you are the religious sort, share some special thoughts on this day.“

I’m not a huge chocolate fan, though I do like a ‘fix’ of chocolate now and again. The hubby will often have to make a ‘chocolate run’, as he gets the craving way more often than me.

That being said, however, my all-time favorite chocolate is my homemade candies that I enjoy making around the holidays. I really should make them more often.

I make a candy dough that I separate and color and flavor, then shape them into varying shapes based on their flavors before dipping them in melted chocolate. My favorite, however, is chocolate covered cherries. 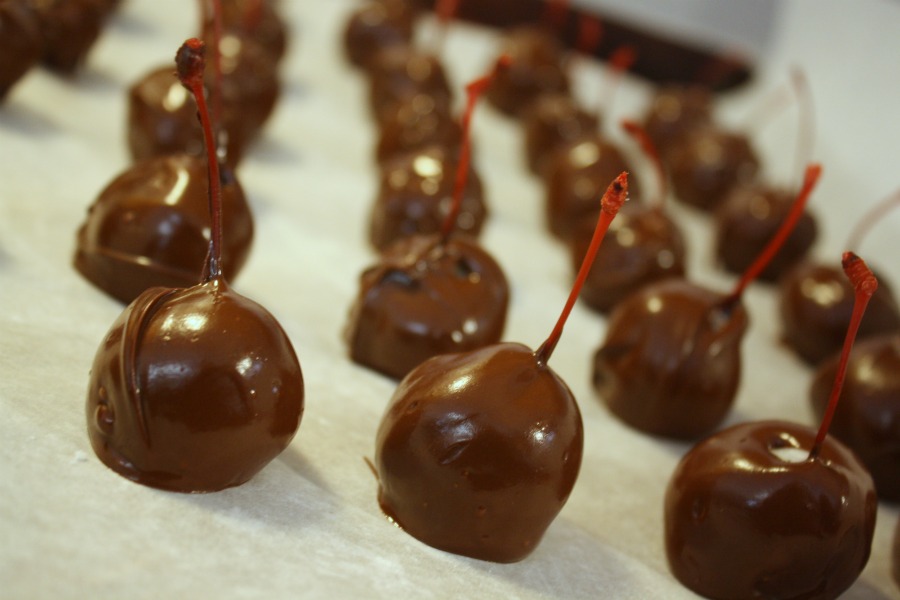 In recent years, I’ve upped the ‘adult’ factor and soak cherries in Kahlua, Brandy and Cognac (not together, individually in case you were wondering). They’ve become the all-time favorites of my friends, so I make sure I make more than 50% as chocolate covered cherries. Boozy and non-boozy.

I always quadruple the batch from the recipe I got from my  mom to make sure there’s plenty of candy to go around as I give them out as gifts. Sometimes I think I should just make the quadruple batch as chocolate covered cherries and forgo the other flavors and shapes, since everyone loves the cherries!

6 thoughts on “Spring Break; Xfinity Sucks Less than CenturyLink; and Chatting about Chocolate with Coffee Randomly”