I’ve always wanted to go snorkeling, but have never had the opportunity. So when we were in Hawaii, of course a priority was to go snorkeling. Naturally Mother Nature was working against us, as for the better part of the week we alternated between hot and muggy and scattered rain showers.

Determined to get some snorkeling in along the beautiful shores of Hawaii, and since we’d never ever been snorkeling before, my cool cousin Brenda suggested we practice using goggles, snorkels and flippers in the pool of the condo we were staying at for the week.

We had fun, Princess Nagger swam for extended periods of time in the pool all decked out with snorkeling gear: 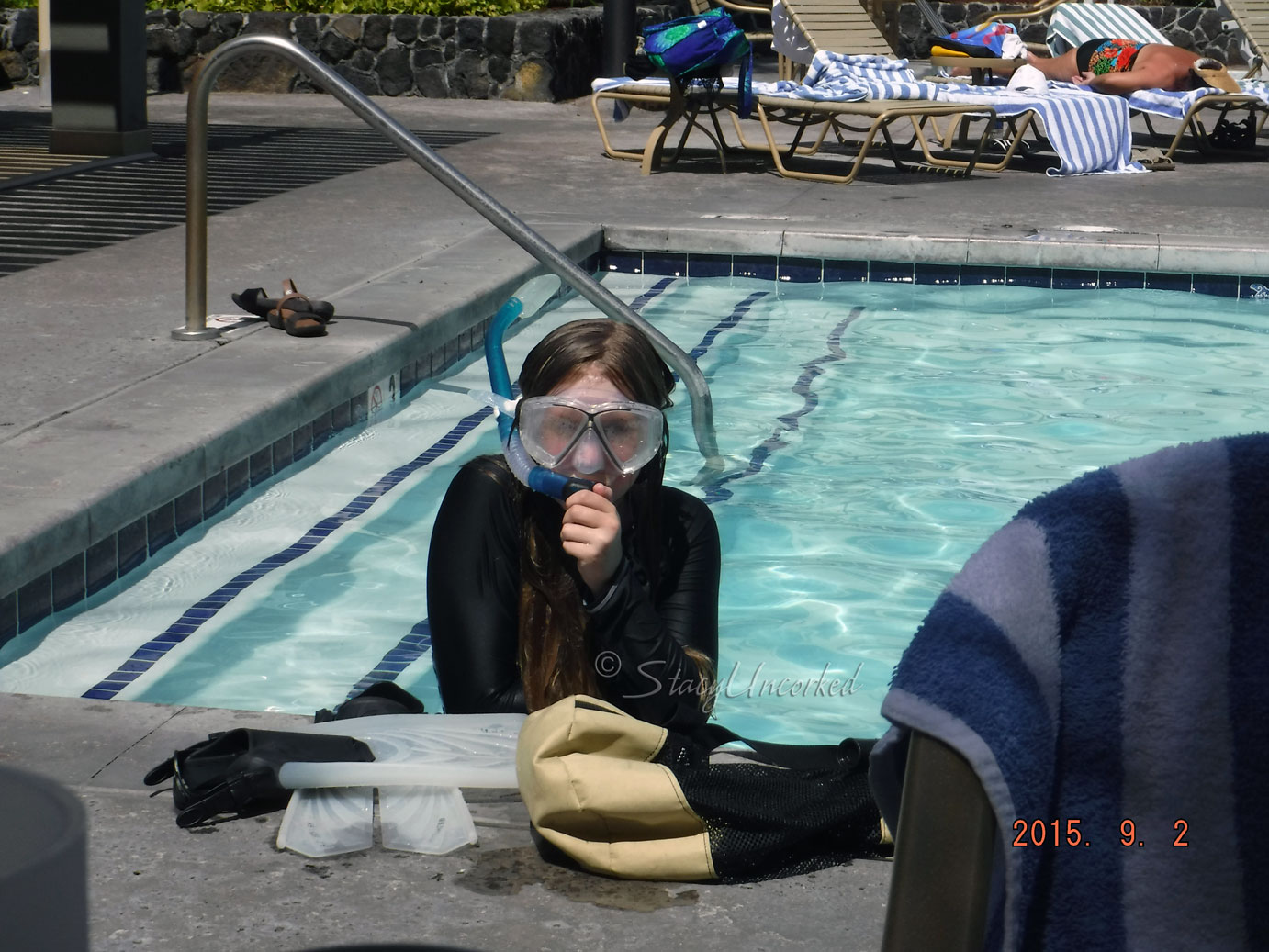 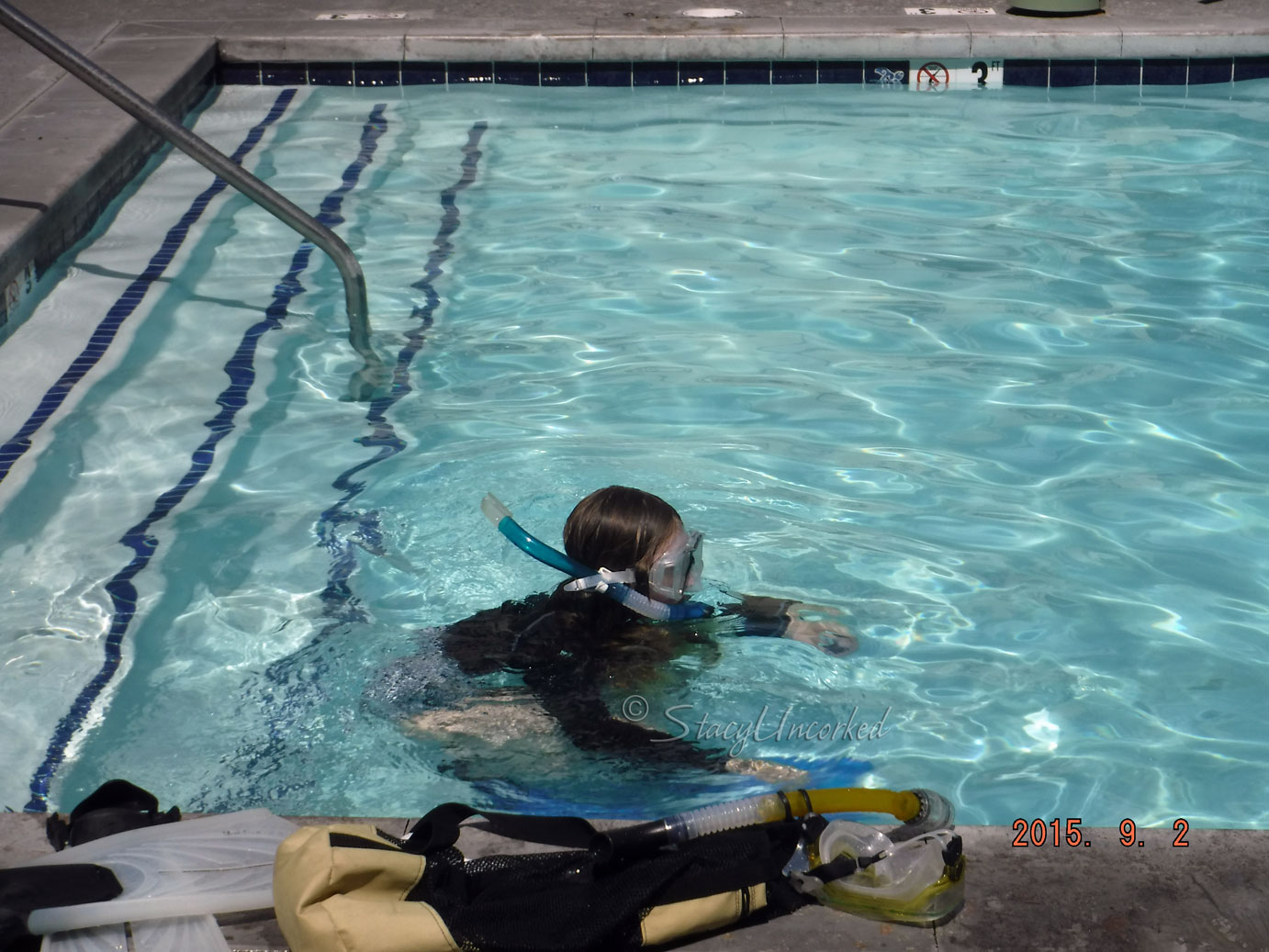 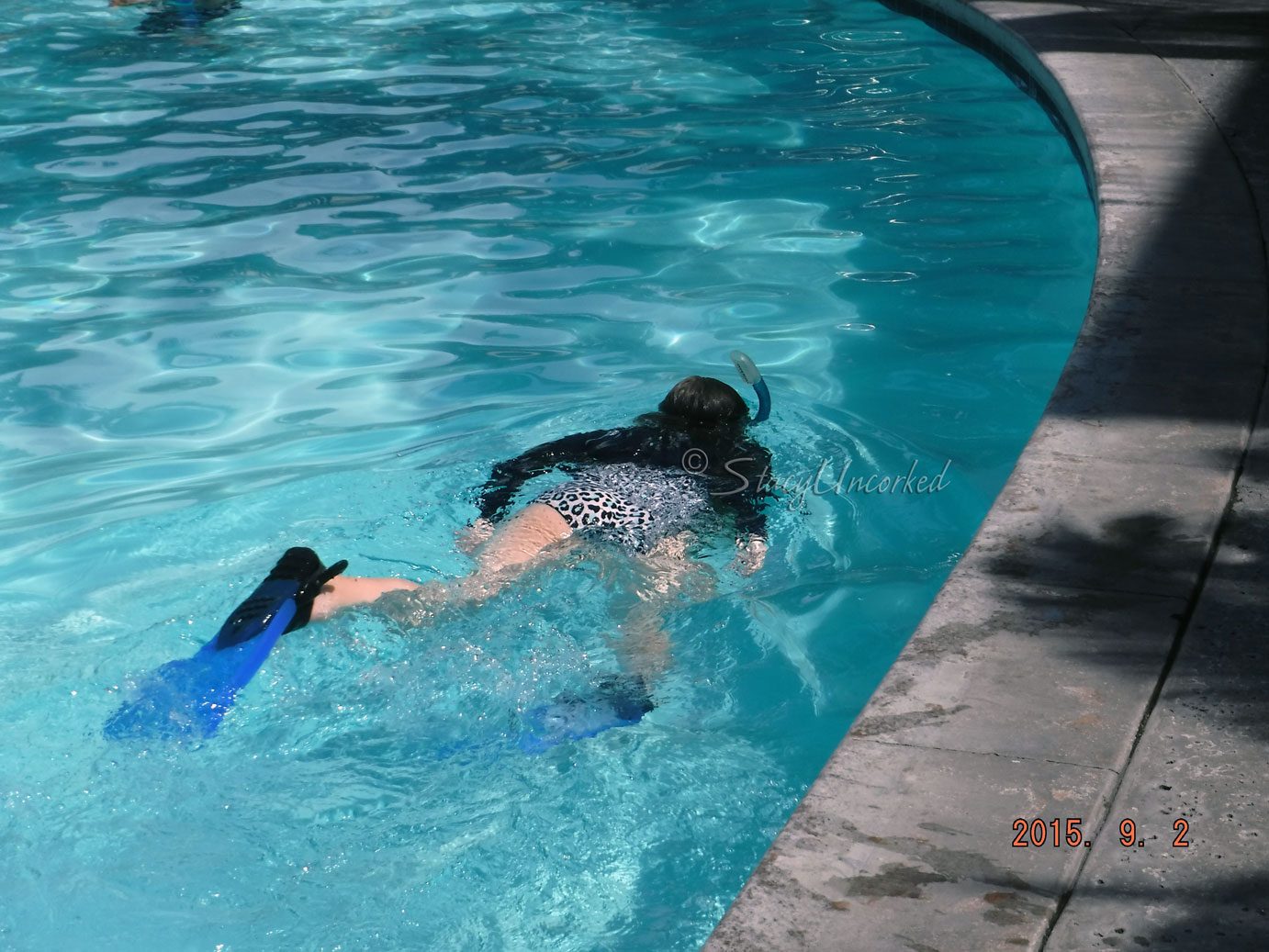 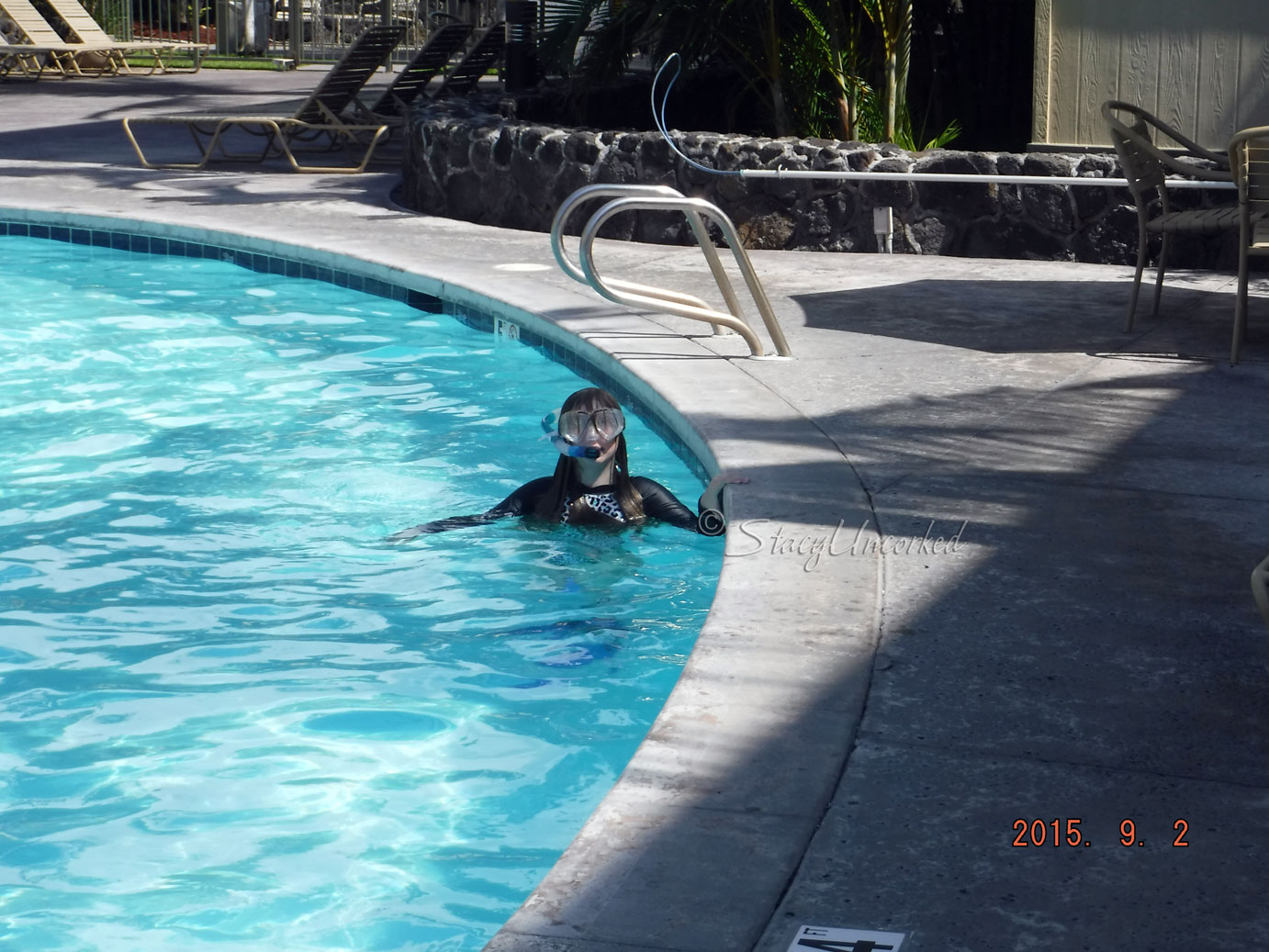 As our week came to a close, we decided that come hell or high water we’d pick a beach and go snorkeling the morning of our final full day in Hawaii. The day had beautiful blue skies, which belied the storms brewing off the coast: 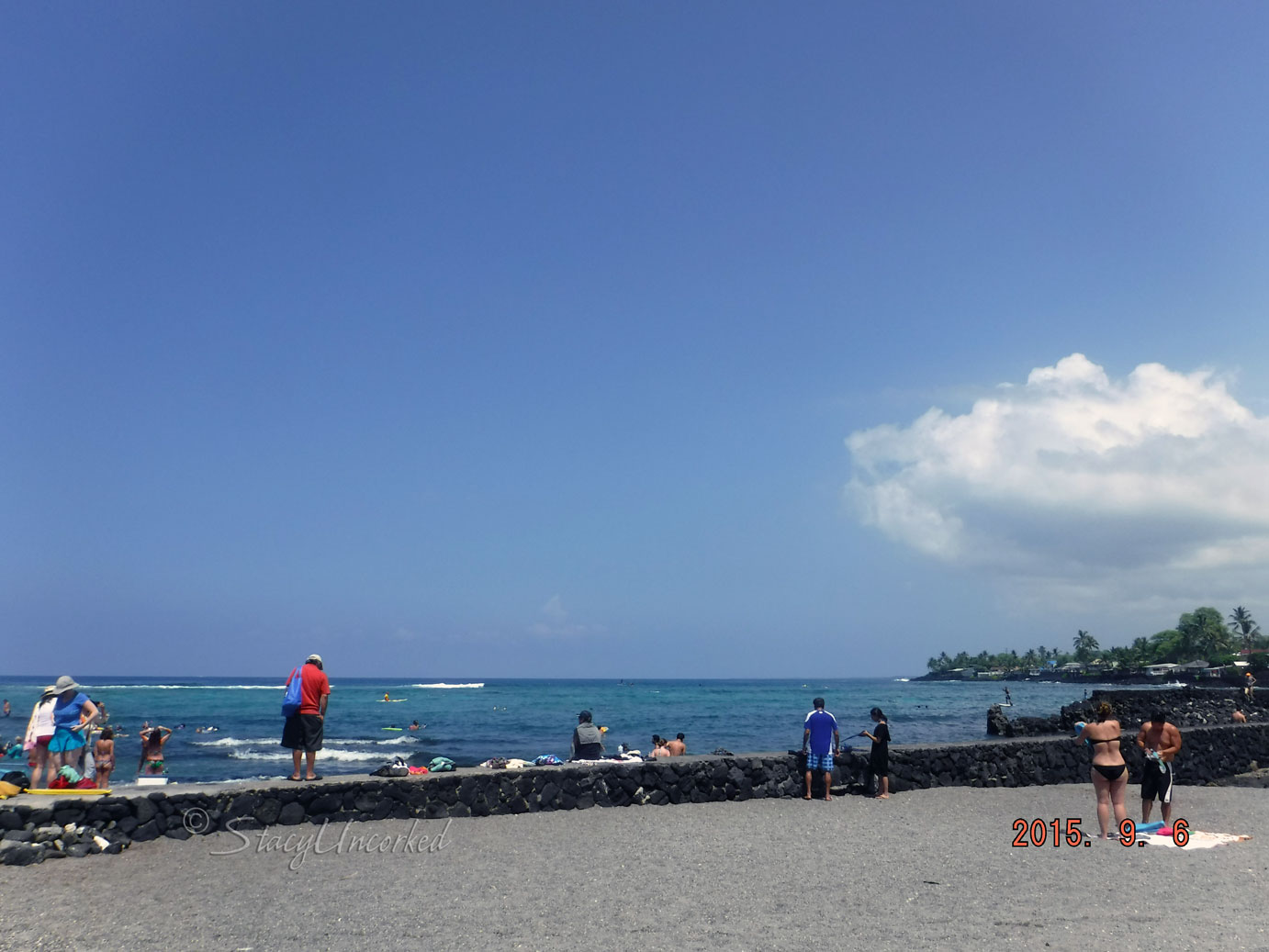 As we got ready to get in the water, the lifeguard stopped us and asked if we’d snorkeled before. Since the Nag and I were newbies, she suggested we go into the water on the other side of her chair, because it was less rocky than the area you see in the image above.

Good advice as I discovered a little bit later. The water was rough and choppy, because of the weather forming off in the distance, so we initially got our bearings for the wave action.

Princess Nagger was all smiles while my cousin Brenda adjusted the flippers: 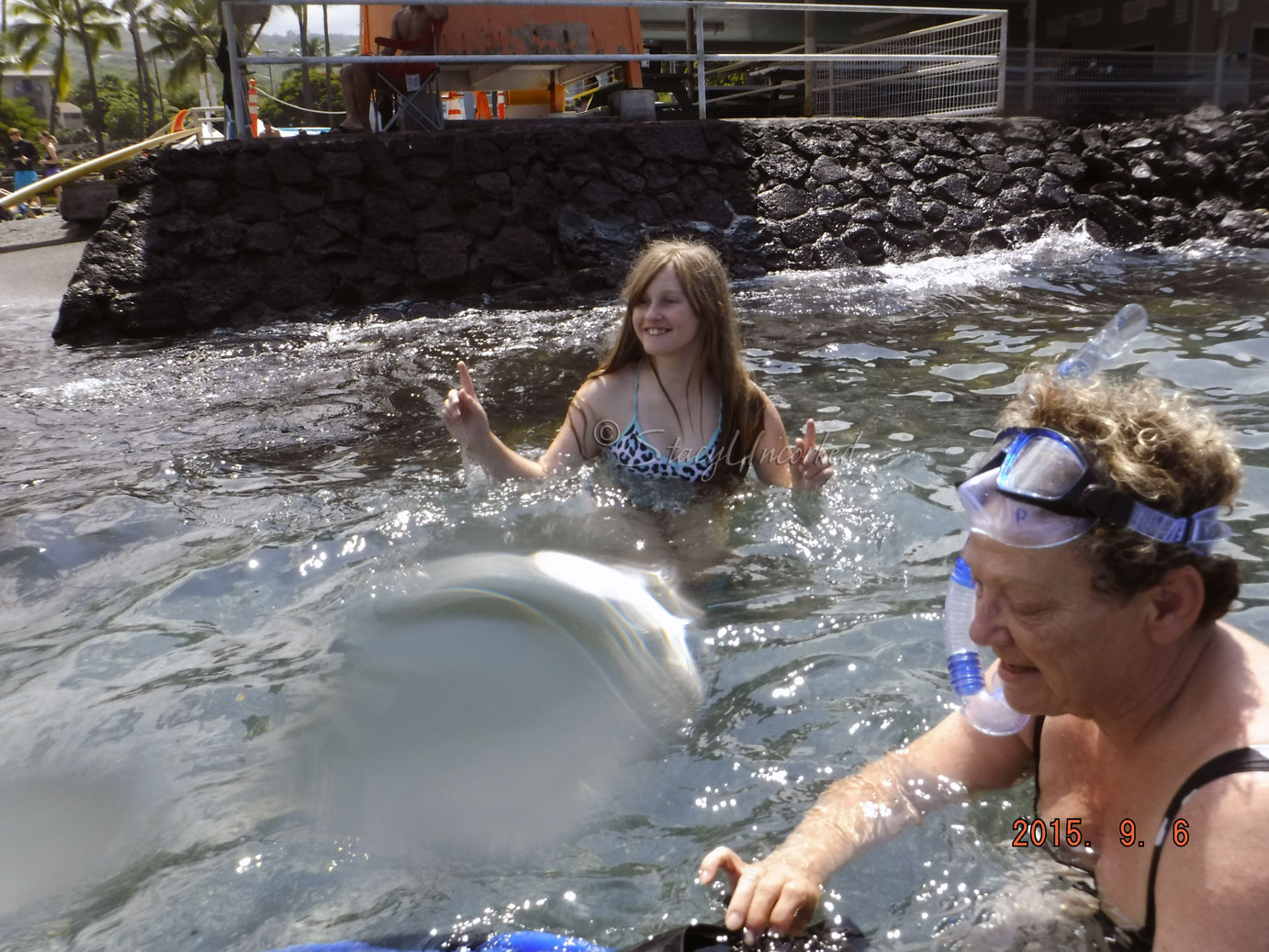 Princess Nagger had fun bantering with my cousin’s grandson (a 13 year old male version of PN – it was so uncanny how many similar interests they have!): 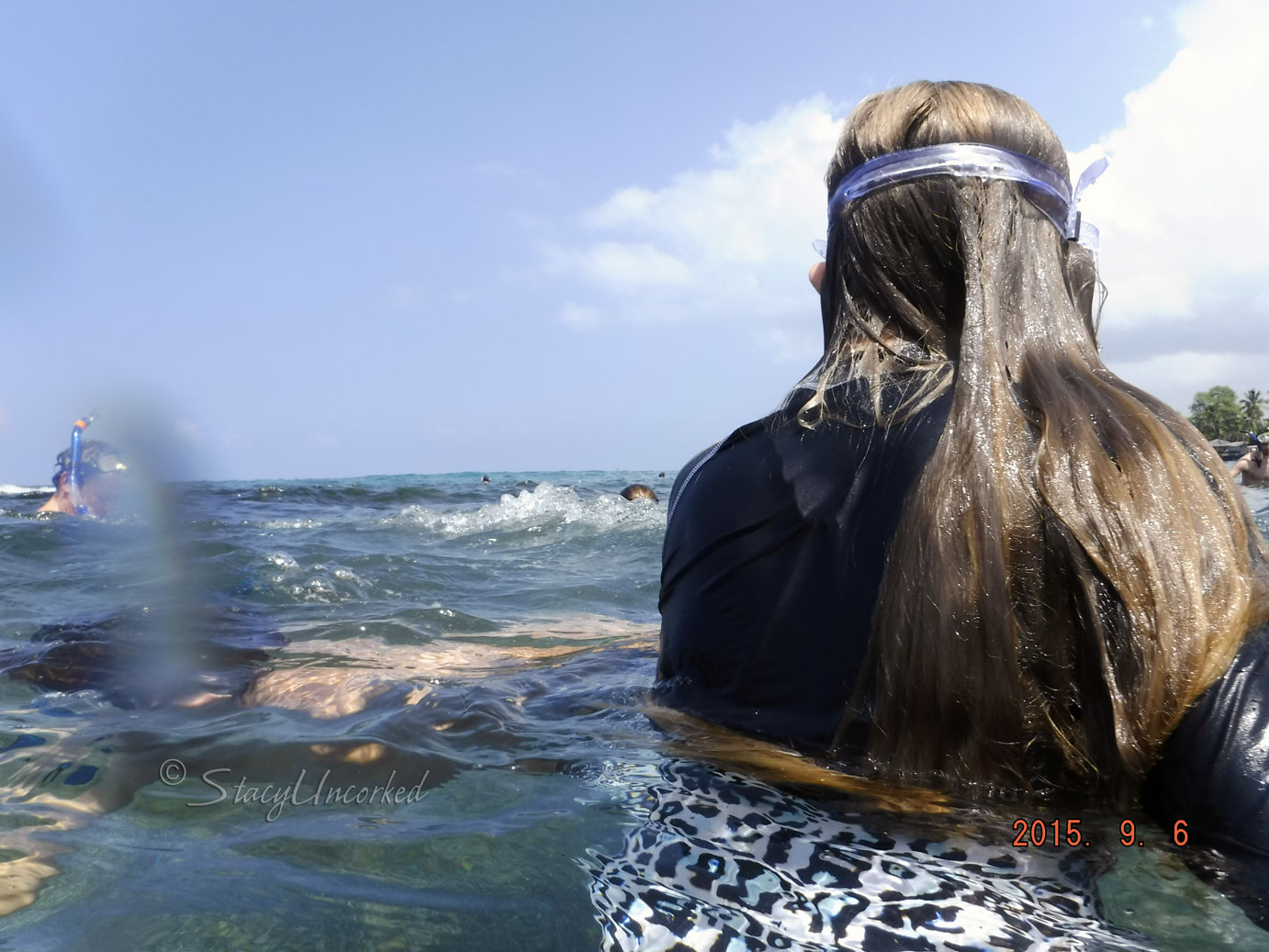 That’s my cousin in the distance with her grandson directly in front of me and PN is the black blob on the right: 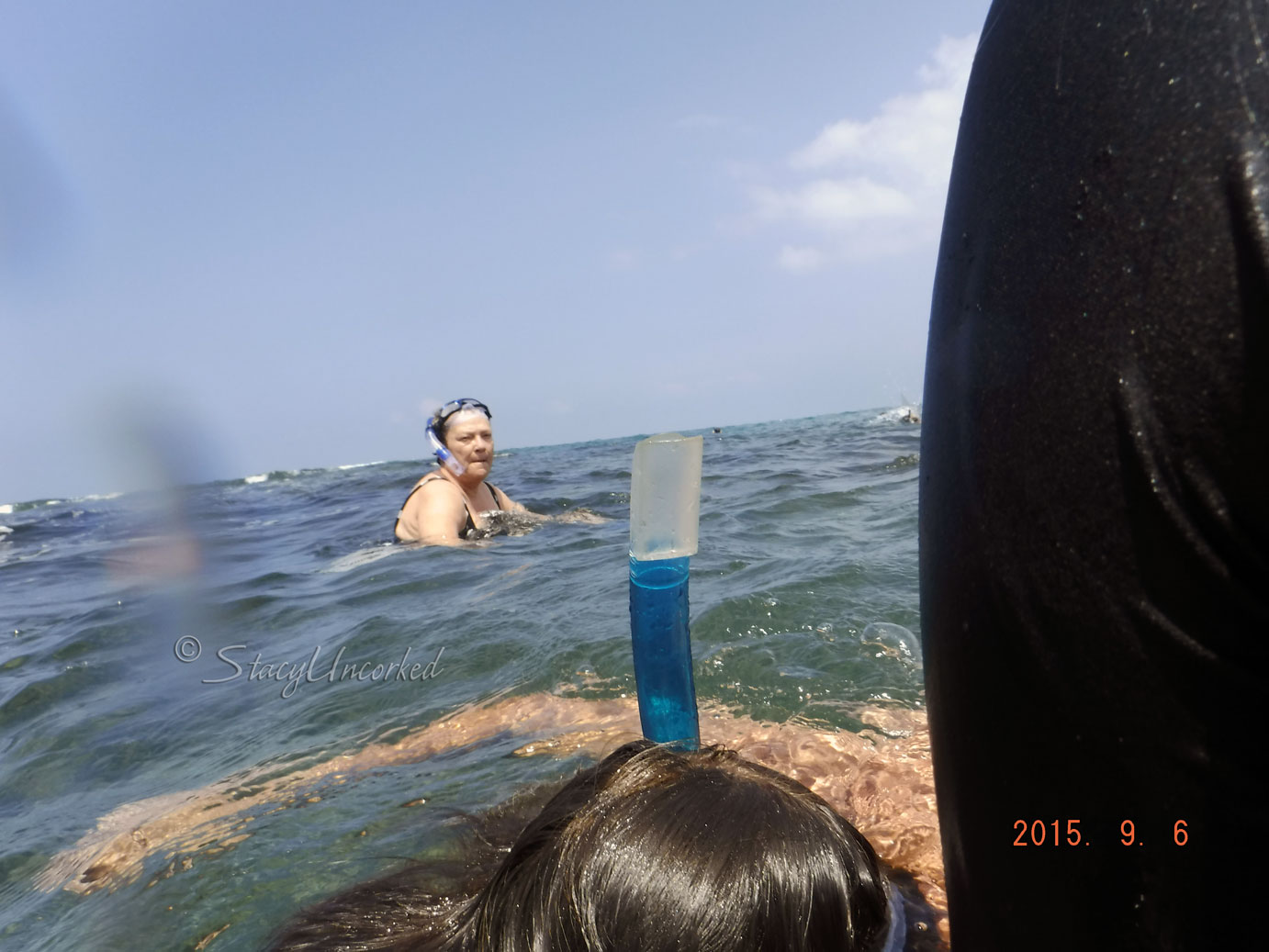 After everyone got used to the battering waves, it was time to find some fish! I’d purchased a special underwater camera just for this occasion, so I was looking forward to getting some great shots of the colorful fish.

I took a test shot under the water to make sure the camera settings were correct: Those rocks were what we needed to look out for, as I found out the hard way a short time later.

My cousin’s daughter and her son getting ready to school us on fish fun: 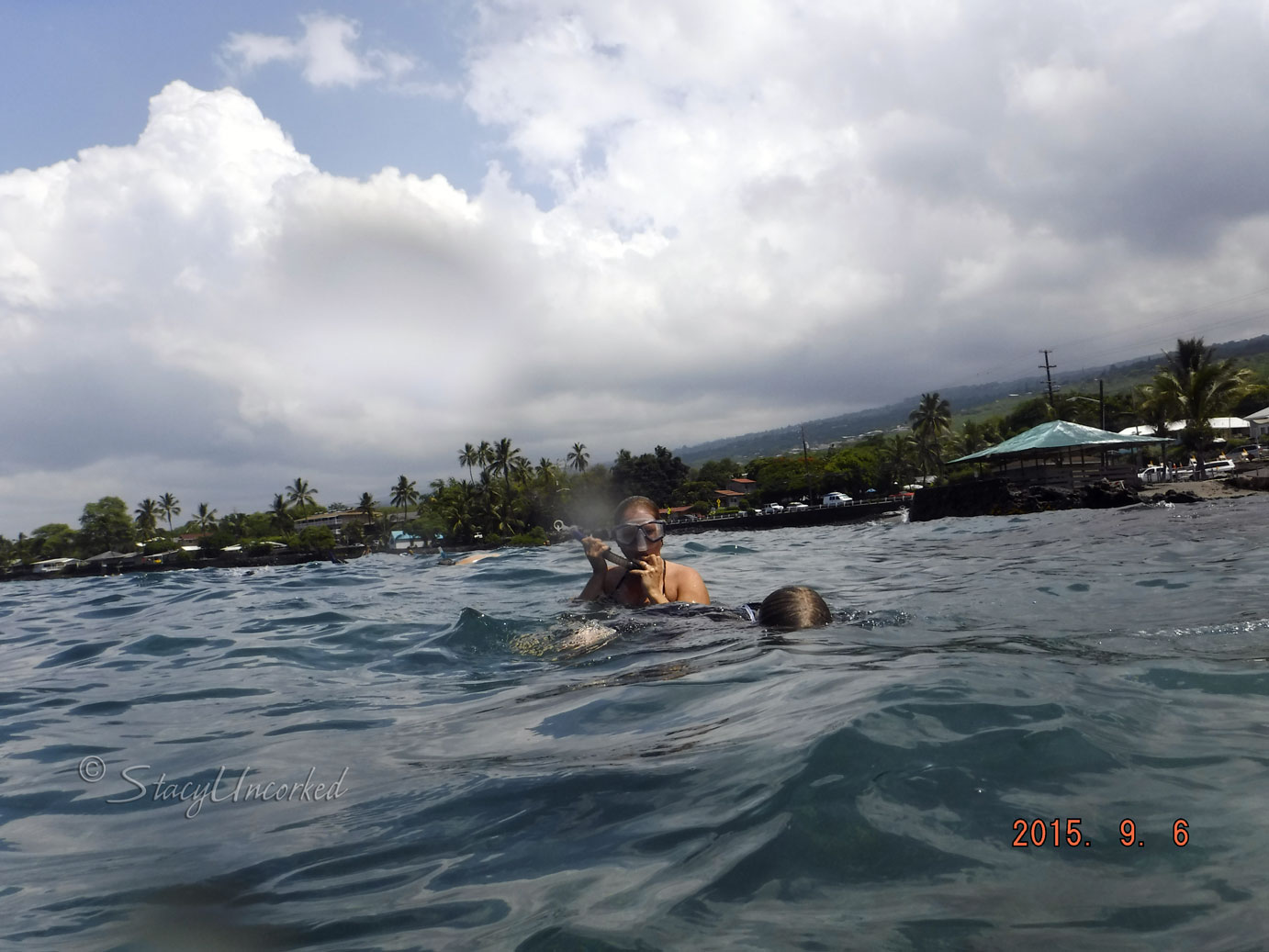 I had just gotten used to the waves and managed to get my mask tightened so water wouldn’t leak in around my face, and started floating and looking for some cool fish. Found one and grabbed a quick shot: 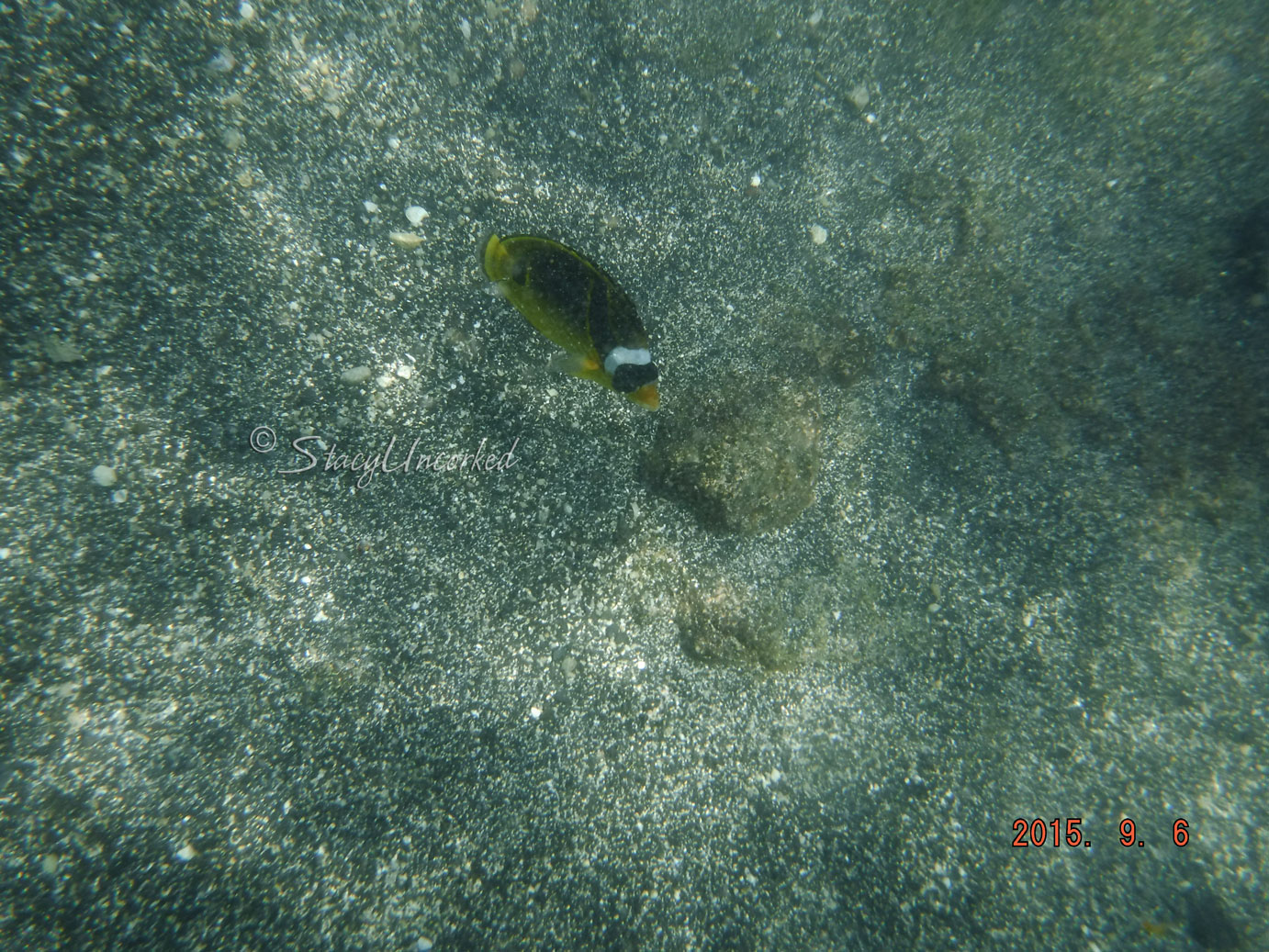 Then all hell broke loose.

A wave came crashing in, which unsettled Princess Nagger who was next to me, so what does she do? Grab onto Mama and pull me under! Apparently I still had my finger on the shutter button as these were the next few shots: 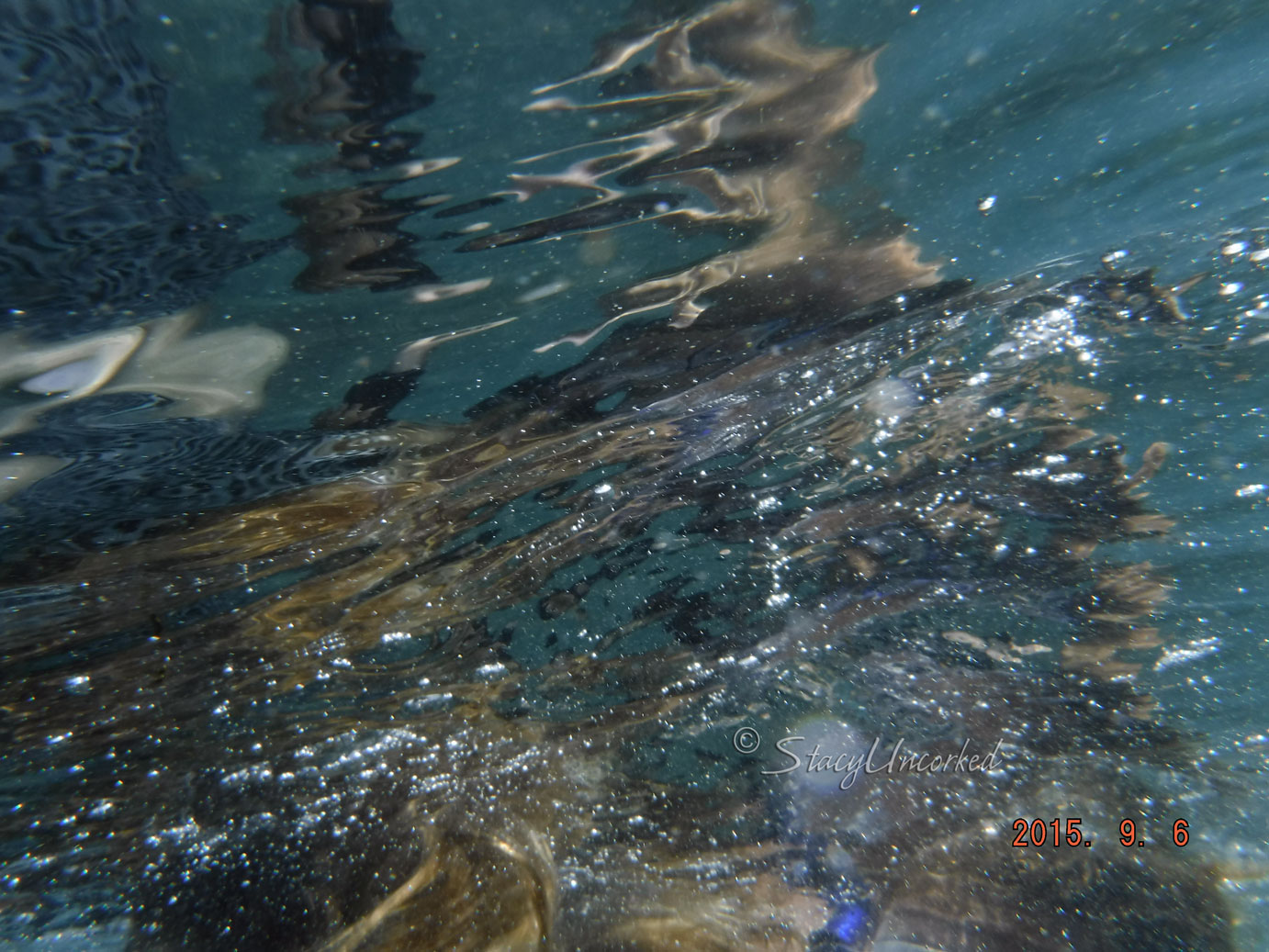 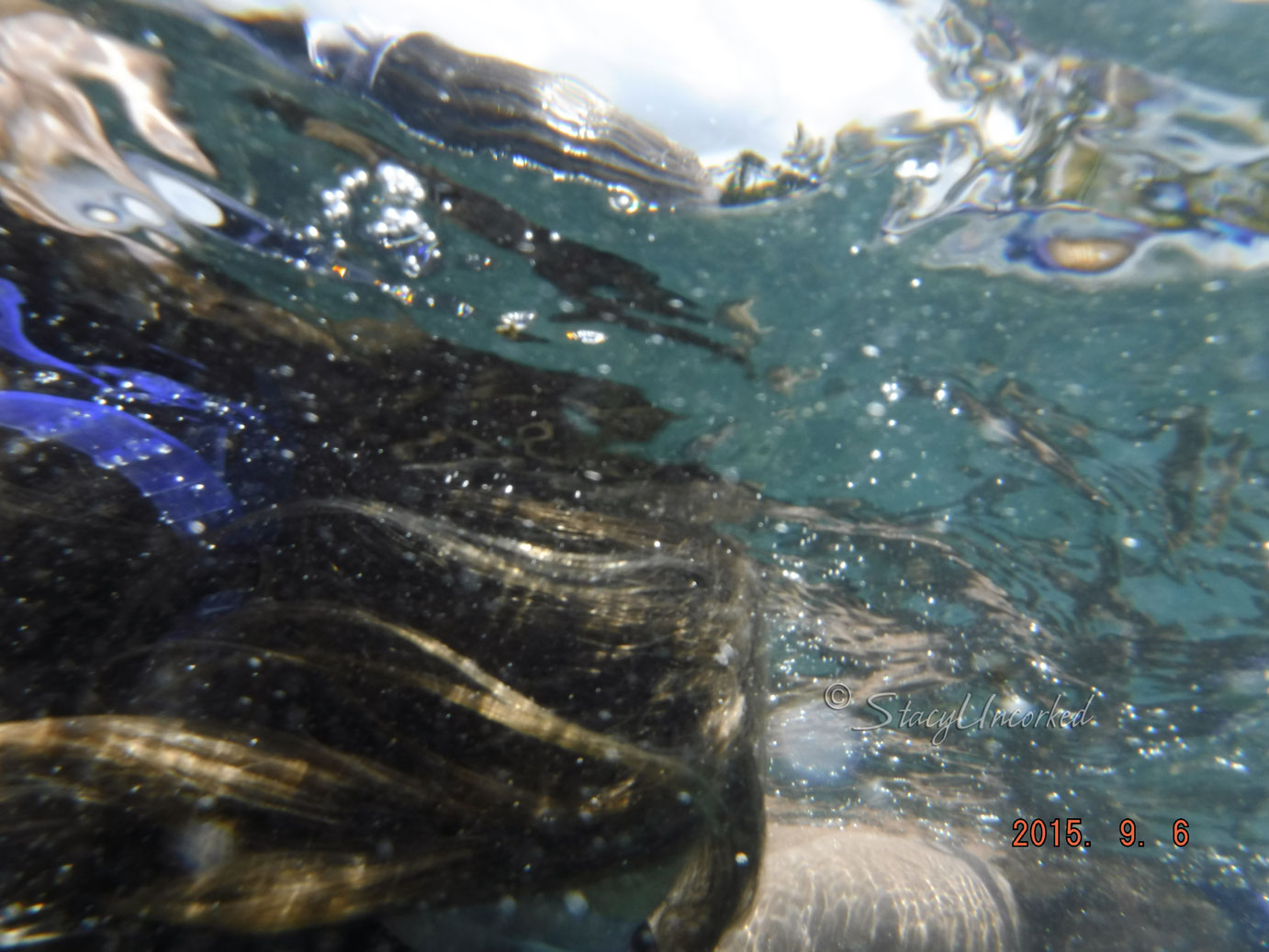 Then the waves started coming faster, so when I got the water out of my snorkel and mask, I saw Princess Nagger heading for the shore. I figured I’d better follow her since I’d lost sight of the rest of our party.

In one last ditch attempt at getting some more fish shots, I stuck my camera underwater and took one more shot (you can sort of see some little bitty fishes and a couple of blurry orange ones): 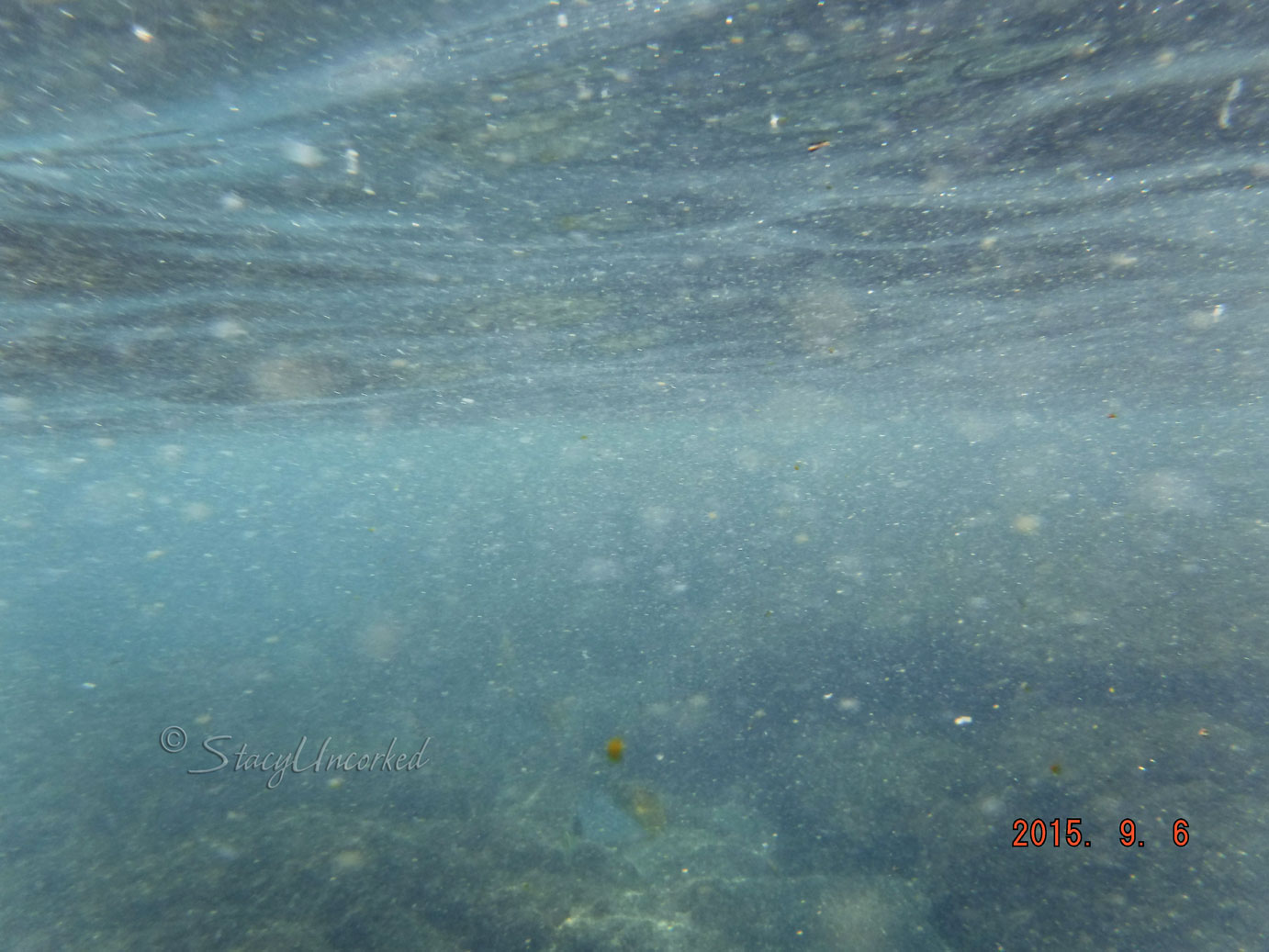 But then the waves continued to push me towards shore – and right into the rocks the lifeguard had warned us about. The water wasn’t deep enough to avoid the rocks, and the rocks were too slippery to stand up and simply walk in, so I had to let the waves drag me over the rocks until I got to a sandy part to stand up and walk out of the water.

It wasn’t until I got to the shower to rinse off I looked down and saw blood streaming from my knees and shin. Ooops.

Ah well, totally worth it. My one cool fish shot was worth the pain and blood.

Next time I’ll be sure to go on a day when the waves aren’t fighting you every step of the way. Because there will be a next time, just you wait and see!

Have you ever snorkeled?

.Wordless or Wordful or Wordy or Wordish – feel free to link up: 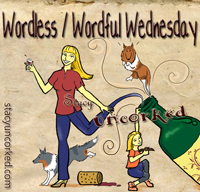 8 thoughts on “Snorkeling in Hawaii (sort of)”