Today’s the last Tuesday of April – whoa! The month of fools went by fast, didn’t it? Kids have just under 6-1/2 weeks left of school – if there’s anything I want to get done while they’re safely squirreled away at a learning institution (like purge their rooms of junk) I better get busy, eh?

Did you see the new frog recently discovered? It looks a lot like Kermit the Frog – no lie! Check it:

For those needing clarification, Kermit is on the left, the real frog is on the right. Ahem.

The Costa Rican Amphibian Research Center described the new species of frog, as Hyalinobatrachium dianae. I dare you to try to pronounce that. I’m sure I’m messing it up in my head big time. Princess Nagger rattled it off like a pro, followed by 220;Dumbing down the scientific verbiage – also known as… (pause for dramatic effect) …a frog.”

Speaking of crazy animal news… Did you hear that Mila Kunis is being sued by a woman who claims the actress stole her chicken when they were growing up together in Ukraine? Seriously. In case you’re not sure who Mila Kunis is, she’s been in a lot of stuff, her ‘breakout’ show was That 70’s Show. Interestingly enough, she’s engaged to Ashton Kutcher, who was also on that show.

Apparently the woman who’s suing her is a so-called singer – Kristina Karo – who is seeking $5,000 to cover therapy sessions she needs “due to isolation for the loss of her chicken pet ‘Doggie.'” Kristina also states in the lawsuit that she needed further therapy upon arriving in LA and seeing Mila because it triggered emotional distress.

Hello?! Obviously she’s jealous that her former childhood neighbor was able to become a star, while she is still trying to… I have no idea what she’s trying to do, based on this music video I had to check out because of morbid curiosity:

Two words come to mind: Batshit Crazy. And I know, I know.  I was thinking “My eyes! My eyes! My ears! My braaaaaaaaaaaaaaiiiiiiinnnnnnnn!” too.

Sorry that’s 2 minutes and 58 seconds you’ll never get back. Granted, of course, if you were brave enough (or had the same morbid curiosity I did) to watch it.

Mila and Ashton (I’m going to pretend I’m on first name basis with the two) posted a video last Wednesday to hilariously respond to the ridiculous claims via an app (yes, there’s an app for that):

No Green Card for you Krazy Karo! (said in my best Soup Nazi voice – Seinfeld fans will get that one).

Right now is the perfect time to make wine! Well, OK, in my little world, it is. Though I haven’t gotten my winemaking space set up as of yet, and I’m really chomping at the bit to get back into the creation of some amazing nectar.

It’s tough after having had years of my equipment and everything all organized and set up, with quite a number of batches of wine brewing at once and my calendar full of notations of days for racking and blending and bottling…wash, rinse, repeat…to be back at square one with getting the initial set up ready to rock’n’roll.

Since we’re lacking dedicated space for my winemaking fun (read: no basement), I’d originally thought to use half the 2-car garage for the winemaking while the hubby utilizes the other half for his music creating. He’s gotten his music equipment all set up and has been working on some new music, but my winemaking has yet to get set up and underway.

The problem is that my half of the garage has a window, a door, and a chest freezer taking up all of the wall real estate that I’d need for hanging and stacking things – so rather than try to rig some racks to get things rolling, I suggested we maybe get another shed like the one we got (only smaller) to use as dedicated space for my winemaking.

I don’t know if I shared our new shed with you, or if it was only shared on Instagram and Facebook – so here you go. Here’s the dude we hired building the shed: 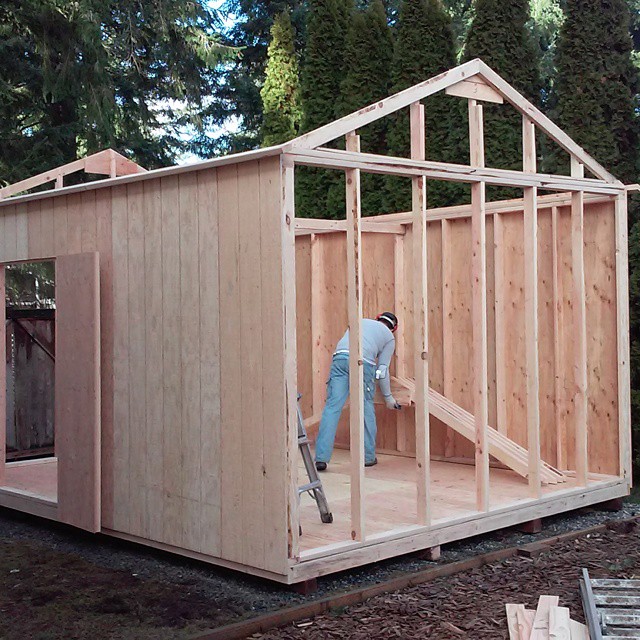 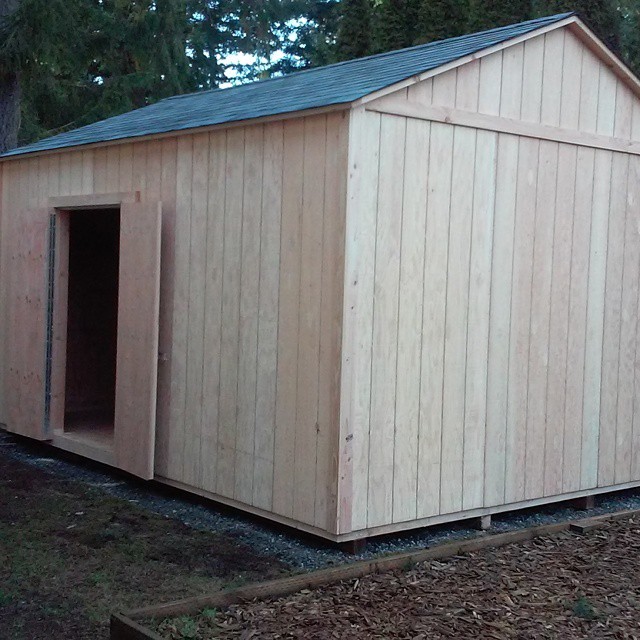 The hubby suggested, however, that since we’d eliminated a large portion of the unnecessary boxes when we transferred them from the garage to the shed, rather than get a second shed, what’s now stacked in the shed (of which 1/4 are the remaining mystery mover boxes that I still need to unpack and eliminate) could easily fit into the half of the garage I was going to utilize, so that I could then use the shed as my winemaking/crafting space instead.

That will be perfect. Wall space, floor space – exactly what I need to have room to set up shelving, stack cases of empty bottles (and full bottles), and be organized. Running electricity to the shed won’t be a problem (with the exception of the extra rocky ground we have going on around here with the mountains in such close proximity, and having to dig a trench 18-inches deep to bury the wire, but it’s not prohibitive of getting it done.) so it’s not impossible to power up in the shed. More power!

I’ll also need to put in a window, but I can do that myself. I’m pretty handy. And maybe I should think about insulating it, since I’ll undoubtedly need to get a window air conditioner to keep things cool in the summer – luckily it’s a small enough space so a window unit should work perfectly fine. I could do the insulation and dry wall myself, I’ve done it before.

The hubby has been prettying it up since it was built:

And there’s plenty of room to add a bistro table or two to have a nice area for inviting friends over for wine tastings. I’m really getting jazzed up about getting this done. So stay tuned – I’ll be working my butt off moving the boxes back into the garage shortly, then getting things all set up and ready to get back to doing what I love – winemaking.

8 thoughts on “Frogs and Chickens and Wine, oh my! Random Tuesday Thoughts Rebel with Coffee”