Those of you who have been reading me for a while know of our move back to where I grew up – Seattle – which means I’m even more gungho about the Seahawks. They played an awesome game over the weekend and are one step closer to going to the Super Bowl. Again.

So I made this fun little badge after the win: 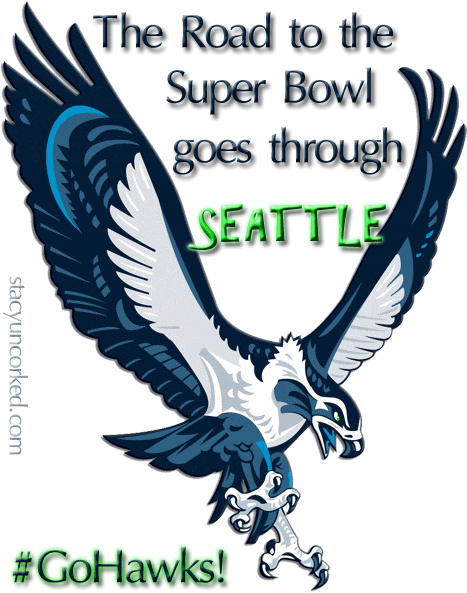 It was interesting watching the game since we had decided to cut the cable cord with the overpriced Xfinity, and were using a funky antennae my brother loaned us to try out (since the one I got only tuned into shopping channels, but no local ones). Luckily the one he loaned us allowed FOX to be tuned in, so we could watch the game. Sort of.

The weather was intermittently rainy, so the signal kept pixelating, and the sound was scratchy and spotty. Except when someone was standing near the antennae that’s taped to the window. So for the last quarter of the game, we had to recruit Princess Nagger to be our human antennae intermediary so we wouldn’t miss anything important. We had to promise to play a around of Go Fish with her afterwards, though. Totally worth it.

Hopefully we’ll get to see this weekend’s game somewhere else – I’ve started putting feelers out to see who (with cable) is willing to let us invade their house to watch the game. Here’s hoping they do well against the Packers this weekend. The kids are already looking forward to wearing their Seahawks shirts to school on Friday, since Fridays before any game are 220;Blue Fridays”. They like being all decked out in blue and green.

Speaking of all decked out… Anyone else still have their Christmas stuff up? Please oh please tell me I’m not alone. I usually take it down over the New Year weekend, but with sickness in the household over the holidays, coupled with the boxes of stuff stacked and buried in the garage amongst the remnants of the moving boxes still yet to have the mystery of the moronic movers demystified, I was late finishing the decorating part, so I’ve been stalling on the taking down part.

That, and the weather hasn’t been cooperative – when I’ve had free time to go round up the reindeer, Mother Nature has decided that was the perfect time to let it rain. While I don’t have a problem with being out and doing stuff in the rain, I’d much rather not put the reindeer away rain soaked. I was going to say I didn’t want to put them away wet, but many of you have your minds in the gutter, so I opted for the alternative. And yet, I didn’t, did I?

At any rate, it’s still Christmas around these here parts, though I’ve not added water to the tree since the last time I watered it, which would be the day after Christmas. I figured after the toppled tree incident when I was stringing the lights, my floors were already clean enough and I didn’t need them to get water logged. Again.

Speaking of Christmas still in our house… I’m hopping on the bandwagon this week with Rory Bore’s Tuesday Chat – I’ve always meant to join in the fun earlier (like when she first started), but I happen to be a blonde and tend to be prone to Blonde Moments. In other words, I kept forgetting. But this week I didn’t forget! Go me!

Last thing you took a picture of?  Why did you want to capture this image?   (Show your work.)

The very last picture I took with my big camera, I did so just the other day, because I got some Annalee’s on eBay just after Christmas to fill out my current collection since some of them got lost in the move. Unfortunately, the seller on eBay sent me 2 wrong ones of the 6 I bought from her, so I took a picture of the lot of 6 to show her what arrived (then subsequently did a image comparison of what I won and what I was sent when I contacted her). But here’s that picture: 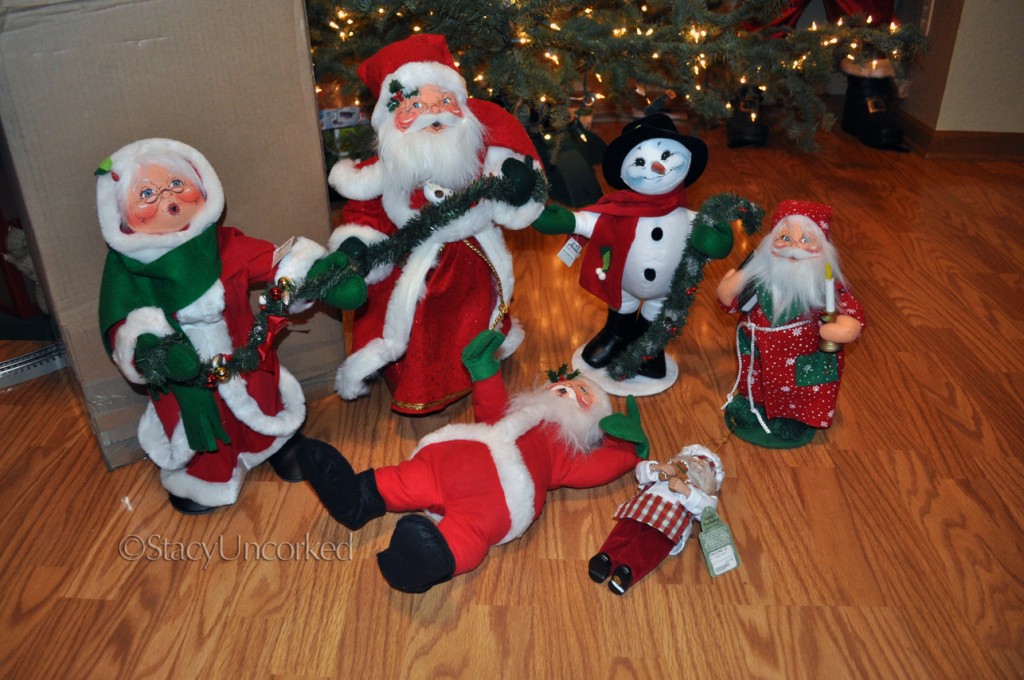 As I was writing this post, I got an email from the seller who felt bad about the mix-up, so she not only refunded me on the two items she didn’t send, but told me to keep the ones she did send. She’ll be getting mega positive feedback, because that’s a great seller. And if she has any more Annalee’s up for sale, she’ll be my first stop.

The last-last picture before that on that particular camera, was one Princess Nagger took for me, of me. I know, right? I’m always behind the camera, but I had applied for a review campaign for dog owners, and they needed a picture of me with the dogs. I never heard back, so I’m assuming I didn’t get chosen for the campaign. Oh well. I still have this picture, though: 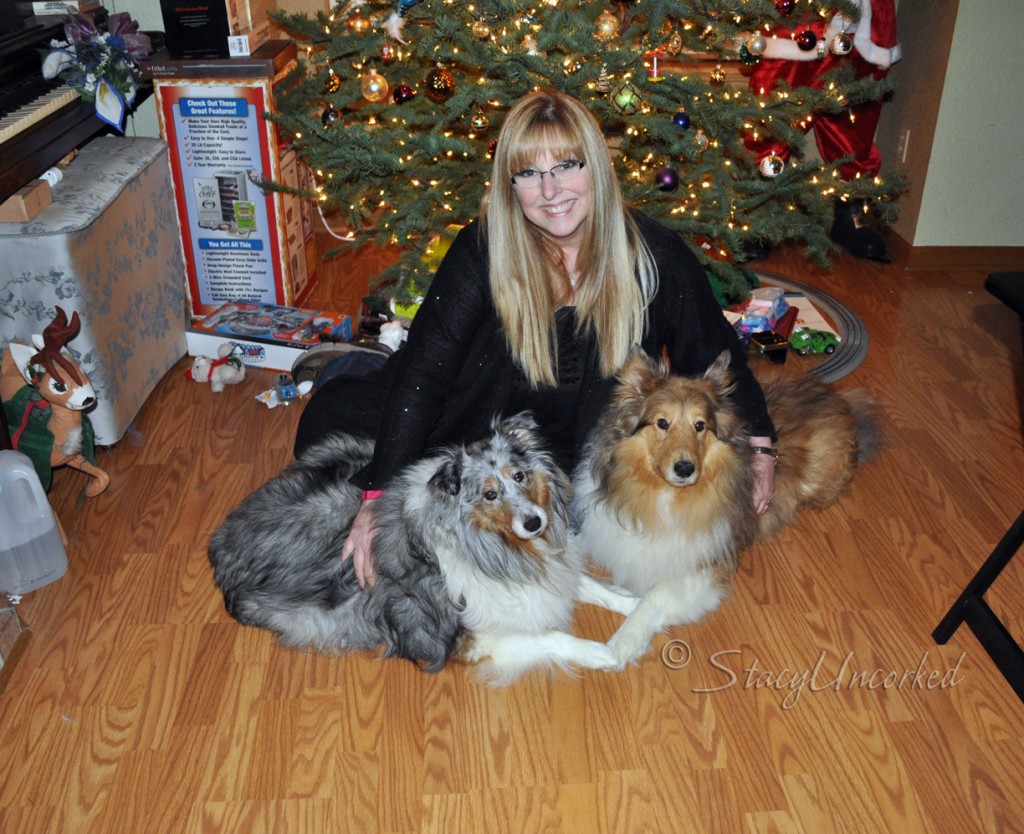 If it looks like I’m sitting at an awkward angle and holding the dogs down, I am, because the series of pictures before this one was of their butts. Since they kept sticking their noses in my face and trying to lick me instead of turning around and smiling pretty for the camera. Could be because I promised them treats, so they were wanting to keep an eye on me to make sure I made good. I did.

Now, the last picture I took with my phone, I did so of making breakfast on New Year’s Day – I intended on putting it on Instagram, but then got busy so never did: 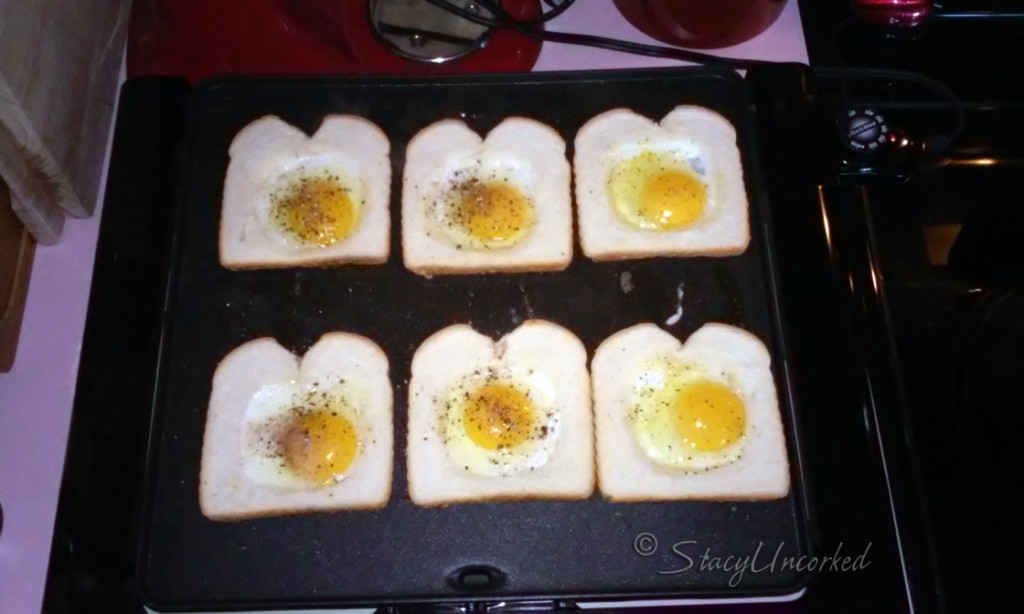 I was making ‘eggs in a hole’ for breakfast per the kids’ request. Pretty nifty, no? You cut a hole in the bread, then fry it with the egg in the center, making toast at the same time as you cook the eggs. Rather genius, I say.

Mister Linky’s Magical Widgets — Easy-Linky widget will appear right here! This preview will disappear when the widget is displayed on your site. If this widget does not appear, click here to display it.

21 thoughts on “Seahawks and the Human Antennae; Christmas is still here; Coffee Chat in an RTT Rebel Kinda Way”