Those who know me know that I am a Barbie fanatic. I’ve been collecting Barbie’s since the late 80’s early 90’s. Which means that I had over 400+ Barbie’s at one time – something that made my dedicated friends question my sanity, especially that one time they moved me and my Barbies to a third floor apartment when I was going through my divorce.

Let’s just say at the end of that particular day, there were half a dozen former Barbie fans that were no longer fans. Ahem.

Last year when we got ready to move 3000 miles across country, I had to do some serious purging, because moving out there 17 years ago it was just me, my dog, one cat and my bazillion Barbies. Oh, and an apartment full of apartment stuff, naturally.

Before moving back to my home state, however, I had acquired a husband, two kids, an additional dog and an additional cat – and all the stuff that tends to accumulate when you’re a family of four staying in one location for an extended period of time.

I had to make a decision. I had to make sacrifices. My Barbie collection had to become a sacrificial lamb due to space limitations with our move. Poor Barbie. I did, however, go through what I could and made sure to keep the cream of the crop of my collection – no way was I giving Barbie up cold turkey.

At least the ones being sacrificed were going to a good cause as they were donated to the Homeless Veterans to sell to have money for those in need. So you know, Barbie was helping the needy.

When I heard about the new Barbie movie, “Barbie and the Secret Door” a magical, musical adventure where a shy princess would rather read than perform her royal duties (sounds a lot like Princess Nagger). Join Alexa as she discovers a door to wonderful land where she makes new friends and finds the courage to stand up for what’s right.

With Princess Nagger’s slow start to making friends at her new school this year, this was the perfect opportunity to invite a few people over to break the ice. Her new best friend (who conveniently lives in the neighborhood) came early to help set up for our mini party: 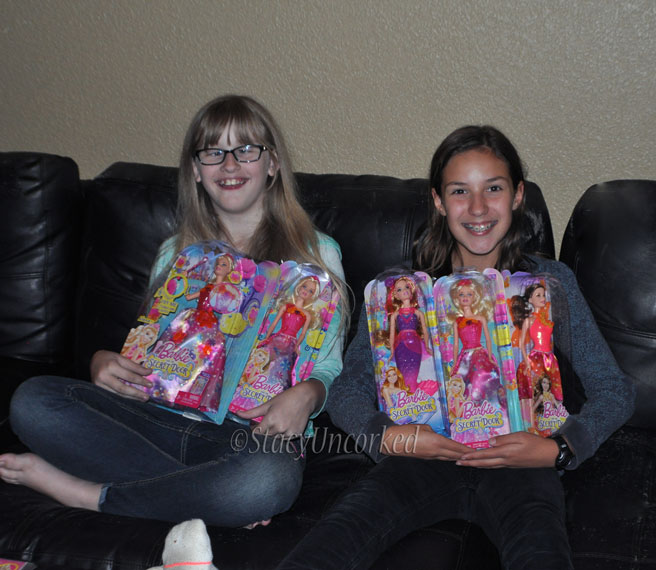 Princess Nagger was feeling goofy. So what else is new?

Thanks to the generosity of Mattel, there was a Barbie for each guest. The two goofballs decided they needed to figure out which Barbie they’d personally be keeping before the other guests arrived. 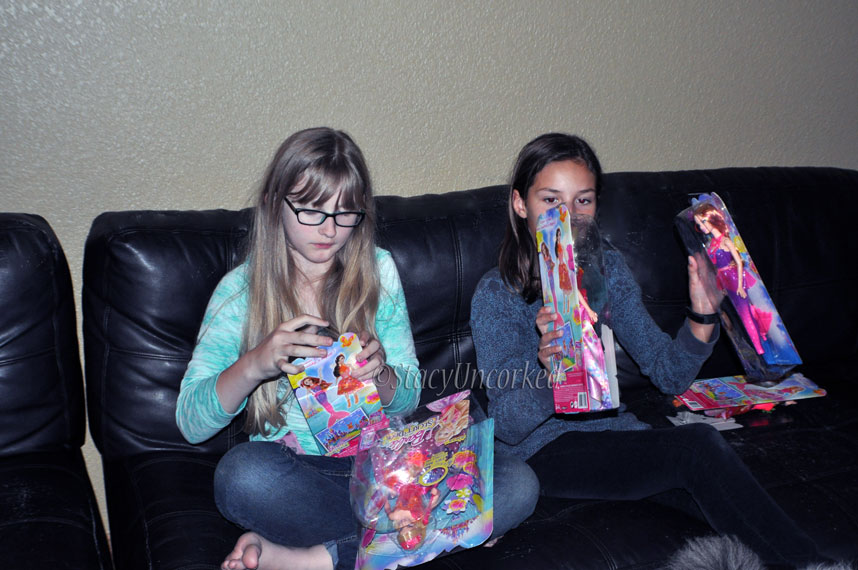 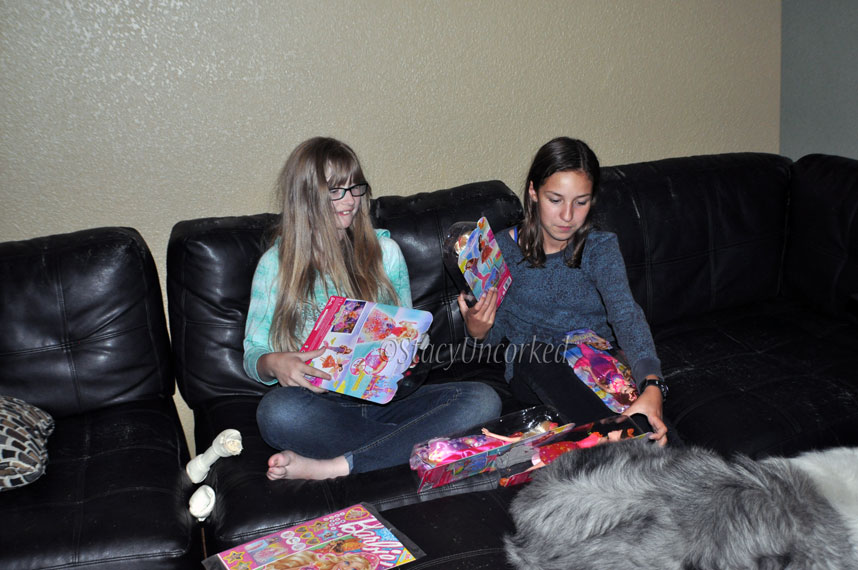 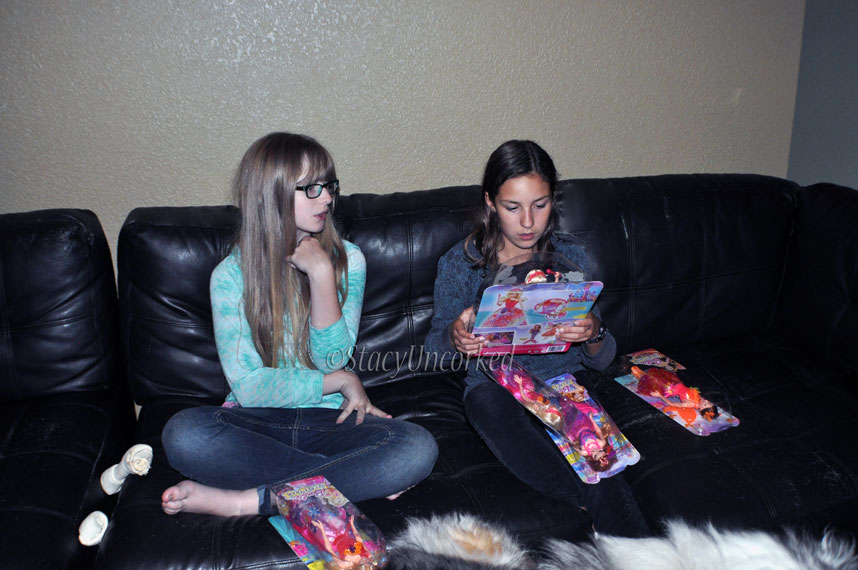 Even the dogs wanted in on the action, as did Little Dude: 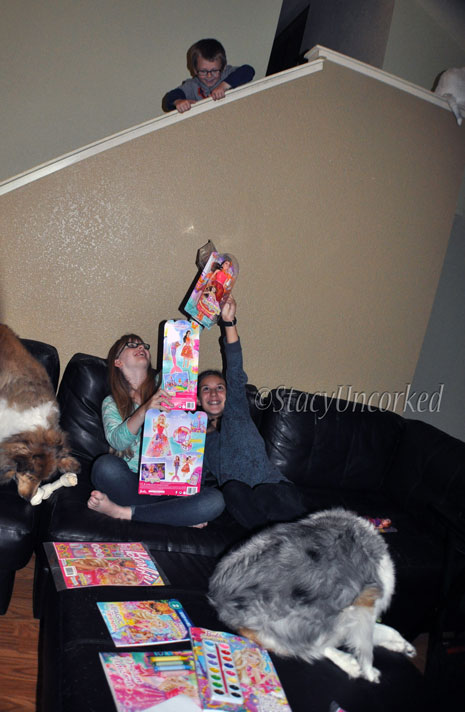 Before the other guests arrived, we put together yummy snacks for the girls to enjoy while they were watching the movie. They loved the movie, and I loved watching them watch in rapt attention, occasionally alerting each other when “their” Barbie was on the screen.

I personally loved the story line – considering Princess Nagger is a shy social butterfly (I know, oxymoron in most cases), the movie shows that even when things are difficult or challenging that you should power through it and do what’s right.

After the movie was over, the girls took turns with the sticker books (and even let Little Dude join in on that fun), Barbie Magazine and the Barbie and the Secret Door book.

All in all, our mini Barbie Party was a raving success – Princess Nagger was gushing about how her friendships have now bloomed much better than before when the girls all came up to her at school on Monday and said what a great time they had, and all played together at recess.

That made my heart happy.

You can visit the Barbie and the Secret Door website to learn more about the DVD as well as purchase a copy for yourself (the DVD is also available a Amazon, Target, Toys R Us and Walmart).

Check out the official trailer and see for yourself that it really is a great movie:

Do you have a Barbie fan, or did you play with Barbie as a kid? What are your favorite memories of Barbie?

One thought on “The Magic Within: Barbie And The Secret Door (#BarbieSecretDoor #sponsored #mc)”