I have to get used to the different spiders here in Washington State vs. Pennsylvania – after having been gone from this state for 17 years, you forget those things.

I was going to say I have to get ‘reacquainted’, but honestly I’d rather not.

Some of those suckers here are ginormous! Like the one that emerged out from under the edge of the bathroom cabinets while I was minding my own business taking care of business.

When I say it was huge, we’re talking at least 4 centimeters (because you know, four centimeters sounds better than an inch-and-a-half-ish, right?).

I’m pretty sure it was a Wolf Spider, as it looked very similar to this – though the one I saw seemed to have more robust legs than this one: 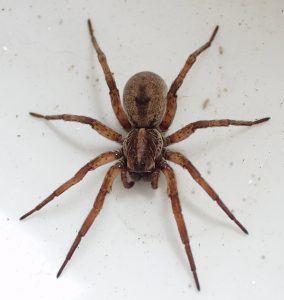 I couldn’t leave that image full size. If you’re ultra daring and don’t hate spiders as much as I do, feel free to click that image and see the giant closeup.

The image is from Wikipedia, from a phenomenal photographer who is much braver than I to snap pics of creepy crawlies named Patrick Edwin Moran. No, no, I’m not saying he  is a creepy crawly, just his subjects. So you can blame him  if you get the heebie jeebies, OK?

Of course as soon as I saw that creepy spider, I leapt up from my perch and realized I had no escape. He (or she, who can tell?) was between me and the door, and the only thing behind me was the tub.

No escape. And no spray products within reach.

My mind was racing trying to figure out how to eliminate the threat as we stared each other down. I briefly thought maybe dumping some shampoo on his/her head would do the trick, but that meant I’d have to get too close for comfort and have really good aim.

Plus I didn’t want him/her thinking they’d found a spider salon and invite all their friends for a shampoo and rinse. Ahem.

I thought maybe I could throw a bar of soap at it, but there again – good aim isn’t really my strong suit.

Then I remembered there was a teeny little bit of Febreze still in the bottle on top of the mini cupboard next to the tub that houses extra soap and washcloths, so I decided it was better than nothing. Without taking my eyes off the intruder, I grabbed the bottle, aimed and sprayed.

At least with a spray bottle, my aim is perfect.

At first the spider seemed a little shocked, but the only thing the Febreze did was undoubtedly make the spider smell fresh. And probably made him/her mad, because he/she started racing directly at me.

I only had a split second to make a decision, since that sucker was fast.  I knew there wasn’t enough liquid left in the Febreze bottle to do any good, so naturally I made the next best decision.

Smash that spider with the bottom of the Febreze bottle.

You know how those bottles tend to have a indentation on the bottom?

The spider fit perfectly  in that indentation without causing any major harm whatsoever.

I thought about just leaving the bottle on top of the spider and making my escape, but I had a feeling this spider had been working out and probably had more strength than I gave him/her credit for.

Meaning that spider would probably have no problem dislodging the bottle (and in my mind, I pictured he/she literally hurling it across the room shouting “HA HAAAAH!”) and come after me in my sleep for messing with his/her ‘do.

So I did what any normal insane person would do in the heat of the moment – I used the bottle like a hammer and whacked that spider until there was no chance whatsoever it would survive.

Then I got a nice wad of toilet paper and flushed him/her down the toilet, just to be sure.

I didn’t want to take any chances of a zombie spider showing up at a later date.

12 thoughts on “The Wolf Spider and the Bottle of Febreze”