It’s April Fool’s Day!  Any pranks planned for today?  Princess Nagger is on Spring Break this week – she’s a bit bummed that she won’t be at school to pull some creative pranks on her teacher and friends.

I’m a little bummed I didn’t get to pack a prank lunch for her.  I’m sure I’ll figure out a prank or three to pull on her while she’s at home today.

With Little Dude being at a different school than Princess Nagger (she transferred to the school district we moved to, we decided to leave Little Dude at the school he started the year at), their days off don’t coincide – his spring break happens later.

I’ve been getting acclimated to driving the kids to school each day – driving LD to his school means a 30 minute drive one way each day. With the way gas prices are, that computes to right around $10 a day, give or take.

I never realized how spoiled we were living in the ‘bus zone’, not only with the time factor, but the cost factor as well.

This whole car line business is all new to me, since the first five years of school for Princess Nagger in PA, the bus picked her up and dropped her off right in front of our house.  Both kids were bus riders after we arrived out here, since the bus route went right past my parents’ house.

The car line at Princess Nagger’s new school is crazy – the parking lot is very small, so the pick up/drop off line runs the typical U-shape through the parking lot – then there are those that park and walk their kids into the school, so they end up creating a secondary line of cars through that same U-shape as they exit.

Of course there are the occasional cheaters, who drive in the ‘through’ lane, then stop at the crosswalk to let their kid out without having to wait in the regular line.  Not cool.

When cars are trying to back out of the limited parking spaces, it gets tricky – especially if you happen to forget how to use your steering wheel, and seem to only be able to back straight  out, like this lady: 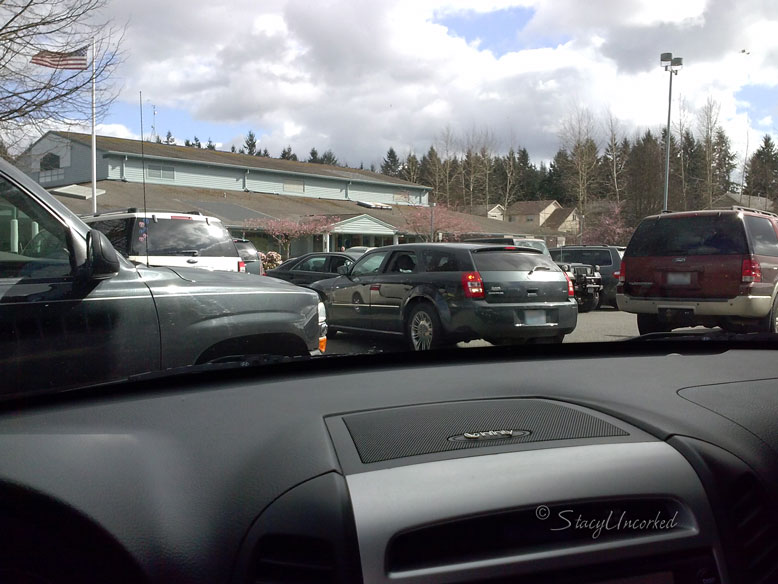 See that SUV in the left side of my windshield?  The lady backing out almost hit her three times in her attempts to back out of that parking space, before she got out of her car and asked the SUV lady to back up so she could get out.

The poor SUV lady had a narrow miss from another car trying to drive into the parking lot around the car line trying to make room for the lady who couldn’t seem to turn her steering wheel.  I was getting nervous when the SUV lady got precariously close to my front end while trying to back up for the other lady.

The car line at Princess Nagger’s school is like night and day to the one at Little Dude’s school – but his school does have a bigger parking lot with five rows of parking spaces instead of just three, so they’re able to keep the ‘drive-through’ people separated from the rest of us to avoid any near-collisions.

Needless to say, there seem to be quite a few cars in the parking lot at PN’s school that have dented bumpers.  Hopefully my car doesn’t end up with any dents.  Aside from the one I discovered in the back of my vehicle that mysteriously appeared while shopping – and since whomever or whatever hit me completely cleared my bumper, the only explanation is that it had to be one of the many jacked-up monster truck wannabe’s that are rampant out here.  Like this:

On Monday’s I have to drop Little Dude off first because PN’s school has an hour ‘late start’ each Monday.  I  had to get clearance from LD’s school to drop him off 10 minutes early, or Princess Nagger was going to end up with a tardy every Monday.

Wednesday’s Little Dude has a 90-minute ‘late start’, so after we drop Princess Nagger off, we have time to kill before heading over to his school.

Basically my time is monopolized every morning beginning at 5:30 a.m. when I get the hubby up for work (we like to have coffee together each morning), then after he leaves it’s time to get the kids up, dressed and fed, pack lunches and rush them out the door.

It’s an adjustment – I miss the days when I could just walk them out to the bus and get on with my day.  All this running around business puts a crimp on my ‘get stuff done early’ preference.

Being that I’m a morning person (mostly) all the rush-rush works fine, but it does mean all the stuff I used to be able to get done before noon no longer gets done before noon.  For whatever reason I’m not very productive in the afternoons –  maybe since I’m feeling groggy and non-motivated, like I need to take a nap.  Ahem.

Of course the other mitigating factor on afternoon interruptus is that Princess Nagger is dismissed an hour earlier than Little Dude.  Realistically there would be just enough time to drive over to pick him up after navigating her car line, but thankfully since the hubby finishes work at the exact same time Princess Nagger’s school is dismissed, he heads straight over to Little Dude’s school and saves me that extra trip.

Princess Nagger and I take advantage of the after-school hour-ish of just her and I as girl time – I better enjoy it now because she’ll officially be a teenager in just under two years, which means she may decide it’s not cool to hang out with your mom.  Ahem.

I trust those that are mothers had an enjoyable Mother’s Day? Here it was just another day, unfortunately. My hubby has never been on board with the whole Mother’s Day thing, since, as he likes to put it, I’m not … Continue reading →