I’m such a sucky hostess.  I come here each week, throw down some drivel, add a linky and then don’t have a chance to come by and visit anyone – or if I do, I’m squinting at my tiny phone screen late at night when I’m supposed to be sleeping, but end up not being able to leave a comment because (no surprise) the internet connection craps out with an error message.

Would y’all rather I take another hiatus until we get into our new house and I don’t have the every 5-minute interruption mode that happens when 4 people are all crammed into the same room while trying to be invisible so your parental units aren’t inconvenienced while you’re occupying their basement in the hurry-up-and-wait mode? (which also leads to very long run-on sentences).

Let me know in the comments – I just feel really bad about not being able to visit everyone with the time constraints and lack of dependable internet.

One thing’s for certain – DSL is barely a step above dial-up – especially when the signal from my dad’s office upstairs is routed through a non-robust wireless router that tends to be sporadic on signal from there to the basement.  It’s worse than cell phone signal, which also is hit-and-miss when we’re here in the basement.  I can’t wait until we get our new house so I can have my sanity and fast/reliable internet connection back again.

Speaking of our house…  Looks like there really is a light at the end of the tunnel, since there has been quite the activity of showings at our old house in PA last week – there’s at least two different parties interested in buying our house.  So we’ll see if any offers come through – meanwhile the house we’ve made an offer on out here has a tentative closing date of December 1st – so see?  Hopefully only one more month of Spacy Stacy to deal with.

It sure would be great if we could close on the house out here and get moved in by my birthday in December – that means we’d be in before Christmas which would be sah-weeeet!  *fingers crossed*

Speaking of birthdays… Little Dude’s birthday is this Saturday.  He didn’t ask for a party, and until we get this ADHD and ODD thing figured out, we’re not doing cake, either – he gets really bounce-off-the-walls-crazy with any kind of sugar.  We’ll make him his favorite dinner of course (he keeps changing his mind on that) and have him open gifts which, at that age, is really all they care about, right?

His school does allow for sending in ‘treats’, but instead of cupcakes I’m putting together goody bags of trinkets and toys for each kid in his class.  It’s Parent-Teacher Conference week, so the kids are a being dismissed at noon every day this week – if he was going to be in school all day on Friday, I’d totally send in cupcakes so he could be hyper at school vs. at home.  I know, I’m bad.

He’ll be all hyped up the day before, anyway – he gets to have a Halloween party at his school, so you know there’s going to be wall-bouncing going on.  They get to bring their costumes in their backpacks and will put them on for a “Halloween Parade” in the hallways of the school before their early dismissal – so they’ll be coming home in their costumes all ready to trick-or-treat.  Of course they’ll be home five hours before trick-or-treating commences, but you know.  They’ll be ready.

Little Dude is going as a firefighter, since that’s what he wants to be when he grows up:

I got the costume from Target (jacket, hat, axe) – it’s actually pretty good for the price, the jacket isn’t a wimpy little thing, it’s more like a rain jacket and I like the reflective stripes that add to safety when they’re out collecting candy.  I think I’ll keep the toy axe at home until trick-or-treating time, though – no need for him to have that part of his costume at school.  Especially when you combine Little Dude + Chocolate + Caffeine = Crazy Town.  Just sayin’.

Princess Nagger is a little jealous because her school isn’t doing anything fun – they are, however, letting the students bring one piece of their costume in as show-and-tell.  Provided they’re not wearing it, and it’s not a weapon or mask.  Or scary or gory.  So Princess Nagger isn’t going to bring any part of her costume in: 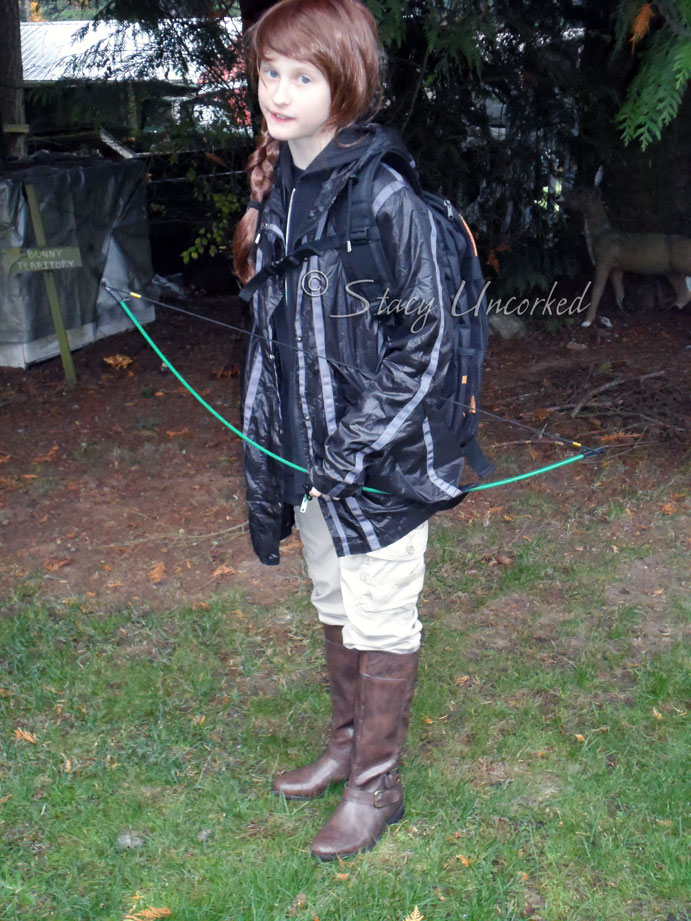 I told her she could just wear the clothes that day, since they’re not actually a costume, I put the pieces together to recreate the look of Katniss (I still need to add red to the inside zipper part of the hoody jacket, and definitely need to style the wig better and do the ‘proper’ braid – I’m not even sure if I got the wig on right side up, I was in a hurry to take pictures.  I also need to paint the bow silver – I have the paint, just waiting for a dry day to get it done).

I’ll share updated pictures next week – she’s so pale that brunette-ish doesn’t work well with her coloring.   I’m thinking I might need to at least put some mascara on her, and maybe darken her brows for the evening.  What do you think?

I’m also linking up with two stellar ladies, Shawn and Impulsive, the lovely hosts of Talk To Us Tuesday. Though they’ve been AWOL for a few months – we might need to storm their castle and find out if they fell in their moat or something.

This is it, people! The 6-city Bordeaux tour has begun. Months and months of planning and logging long hours to make sure everything was ready to enable the tour to commence without major issues has finally arrived. My client and … Continue reading →

The countdown is on for the big 6-city wine tour event I’m working with one of my clients on – first stop, New York next Monday, so of course I’m in the throes of all the last-minute hurry-up-and-get-it-done-yesterday mode. I’ve … Continue reading →

15 thoughts on “I Suck and so does DSL; Light at the end of the Tunnel; LD’s B-Day and ADHD/ODD; Halloween Preps: RTT Rebel”