I seriously need this ride called life to slow down a bit so I can catch my breath.  Maybe next year.  Meanwhile, being Basement Dwellers seems to make time speed by too – or maybe it’s because we go for long drives and run multitudes of errands just to get out of the basement for a spell.

I might need an intervention, though – we make a daily trip to our favorite coffee shack where we’ve become regulars, and they’ve gotten me hooked on a Seahawk’s Mocha with white coffee.  At least once a day I’m totally in heaven.  Just sayin’.

Still waiting to hear about the hubby’s interview – the president said he’d hear either way by last Friday, but the HR person said it’d be by the end of this week.  I don’t know about you, but I’ve always thought the HR person is a little more knowledgeable about hiring dates than a pres.  So as far as I’m concerned, no news is good news.  And I’m still keeping my fingers crossed.

One of the things the hubby is getting acclimated to in this part of the world is it seems the parking spaces are a bit narrower than they are out East. I’m thinking it’s because there are more compacts out here per ratio than the bigger vehicles that seem prominent out there. Or it’s just people need to learn how to park out here. Case in point:

What was funny is there was another van in the opposite space similar to the van that was parked next to the hubby’s car – also parked crooked with their back tire on the line:

Yes, I’m easily amused, why do you ask?

Speaking of being easily amused… Every time I see this stack of cat food, I read it as “Attack Cat!” instead of what it really says:

Wouldn’t that give you pause (or maybe even ‘paws’) if you were to stroll by it in the store?  I think it adds to the brain decipher with the cartoon image of a cat pouncing.

Speaking of giving you pause… They hubby and I were driving and spied this motel sign:

Here, let’s get a little closer so you can spot what we did:

Apparently there’s an ‘e’ in ‘Monthly’ I didn’t know existed.  Did you?  Maybe Monthley Rates are even better than Monthly Rates, you think?

This is the best pumpkin pie I’ve seen yet: 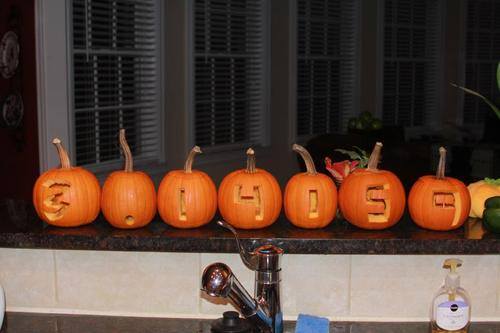 Being Basement Dwellers has its perks – a few nights a week my mom does all the cooking.  I think with all of us kids grown and out on our own for so many years, it has some sentimental value for her to cook for more than just she and my dad again.  At least that’s my assumption – she could be wishing and hoping we’ll be moving out soon so she can relax again and not subject herself to so much work.

The non-perk-y mode of being a Basement Dweller is that we are all four in the same space – which makes it near impossible to get anything done on my computer.  That issue is compounded with the whole “now you see it…now you don’t!” aspect of the internet connection.

Later today I’ll be relocating their wireless router – my dad having it stashed inside his desk is the main cause for the intermittent connection we suffer way down in the basement (ya think?!).  We’ll get it squared away – or I’ll just sneak into his office and move it when he’s not looking so as not to upset the apple cart.  Heh.

I’m also linking up with two stellar ladies, Shawn and Impulsive, the lovely hosts of Talk To Us Tuesday.  Although we might have to start ragging on them, because as of this posting, they haven’t posted anything for six weeks!  Slackers.