We are just days away from Halloween.  Princess Nagger and Little Dude can hardly contain their excitement about dressing up and going out to see how much loot they can respectively get – of course, we’ll see how pesky Frankenstorm pans out, Halloween could very well be a washout.  Literally.  We’ll see – I’m pre-scheduling a few posts just to make sure there’s something happening over here in case we end up losing power.

This week’s Monday’s Music Moves Me is of course Halloween songs – you wouldn’t expect any less, would you?  We’re going to start off with a song that my buddy Denise from Run DMT had on her blog not too long ago – it was part of the soundtrack of “Hotel Transylvania” – a movie both Princess Nagger and I enjoyed immensely.

This artist is just 15 years old – hard to believe, because she’s really very good.  Not only do I love this song, but the video even has footage from “Hotel Transylvania”.  Here’s Becky G with “Problem” (The Monster Remix) featuring will.i.am:

When we’re highlighting Halloween songs, I’d be remiss if I didn’t include this next one.  This was a debut hit from this group that has been unmatched by other major pop hits from its time.

The son of Motown Records executive Berry Gordy, Jr., this song happens to include backing vocals from none other than Michael Jackson and Jermaine Jackson.  Figured it out yet?  It went to #2 on the pop singles chart in the US and was certified gold.  Here’s Rockwell with “Somebody’s Watching Me”:

We certainly can’t leave out the old classic by Bobby “Boris” Picket, “Monster Mash” – I found this fun video someone did for some Disney contest (that they apparently won – and well deserved, since they did a great job putting it together):

I’ve always loved Adam Sandler’s version of this song – give a listen to “Werewolves in London”:

I shared this song last year at this time – it apparently caused some problems for Will Smith when it first came out, complete with a lawsuit (that was settled in Will Smith’s favor, but the video remained elusive after it was pulled), but I found a funny Sponge Bob video using the actual song, “A Nightmare On My Street”:

And last, but certainly not least, we’ll wrap this week’s music selection with another song from Hotel Transylvania (the video and sound aren’t all that great, but the song itself is – watch it while you can before it gets pulled for legal reasons) Written by Robert Smigel, Adam Sandler and Dennis White and performed by Andy Samberg, CeeLo Green, Selena Gomez, Adam Sandler and Kevin James – here’s “Zing”:

Enjoy your Monday – and have a Happy (and safe) Halloween! 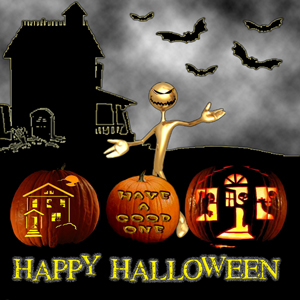 I have the supreme honor and privilege of being a co-host with the inimitable Xmas Dolly and her cohorts in crime, Lorie of The Shewbridges of Celebration, Florida, Callie from JAmericanSpice, Cathy from Cathy Kennedy’s Blog, and for the month of October, our Honorary Co-Conductor is the lovely Rebecca from Every Day Life.

14 thoughts on “Problem – Somebody’s Watching Me do the Monster Mash with Werewolves in London causing A Nightmare On My Street… Zing!”