Here we are at the beginning of October, and I’m thinking I better not blink, because it will undoubtedly suddenly be November if I do.  Or next year.  Anybody else feel that way right about now?  Those that are they say time flies by faster as you get older – I’d like to slow the ride down just a bit.  Please and thank you.

Part of the excessive speed to wrapping up the current year are stores that seem to have their finger stuck on the fast forward button when they do stuff like this: 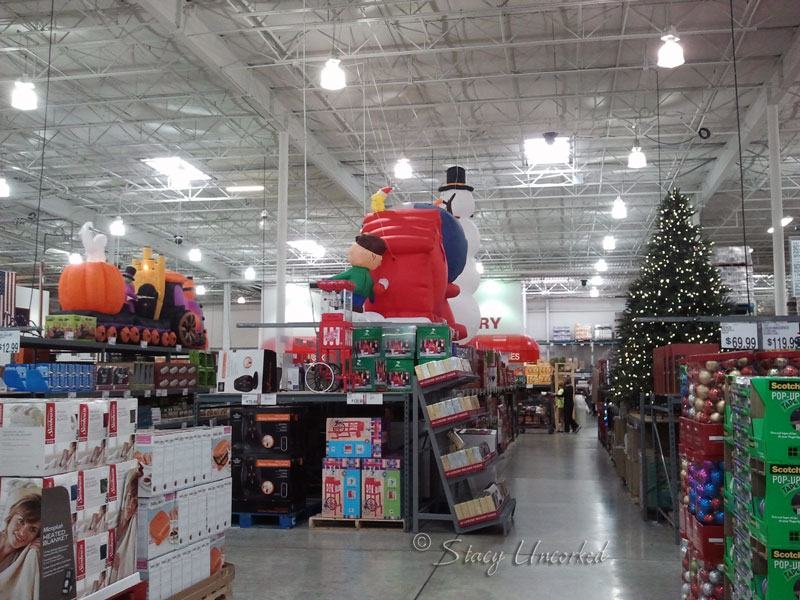 This was at BJ’s on Saturday – notice how they have the Halloween stuff on one shelf, then Christmas, Christmas, and more Christmas the next several rows over (and in the middle of random aisles).  Christmas overload in September.

Whatever happened to giving Thanksgiving its due respect and holding off on all the Christmas excess until the day after Thanksgiving?  That’s a rhetorical question, obviously – we all know that it’s all about the retailers making as much money as possible.  Bah humbug.

Don’t get me wrong, I love Christmas – but I also love the overall fall season and love Thanksgiving.  I don’t think it’s fair such an important holiday should be shoved to the side and tromped on by Christmas Elves.

In other news…  My new appliances arrived last Thursday.  Here are a couple of quick shots to show you how awesome they look – first up the stove and microwave: 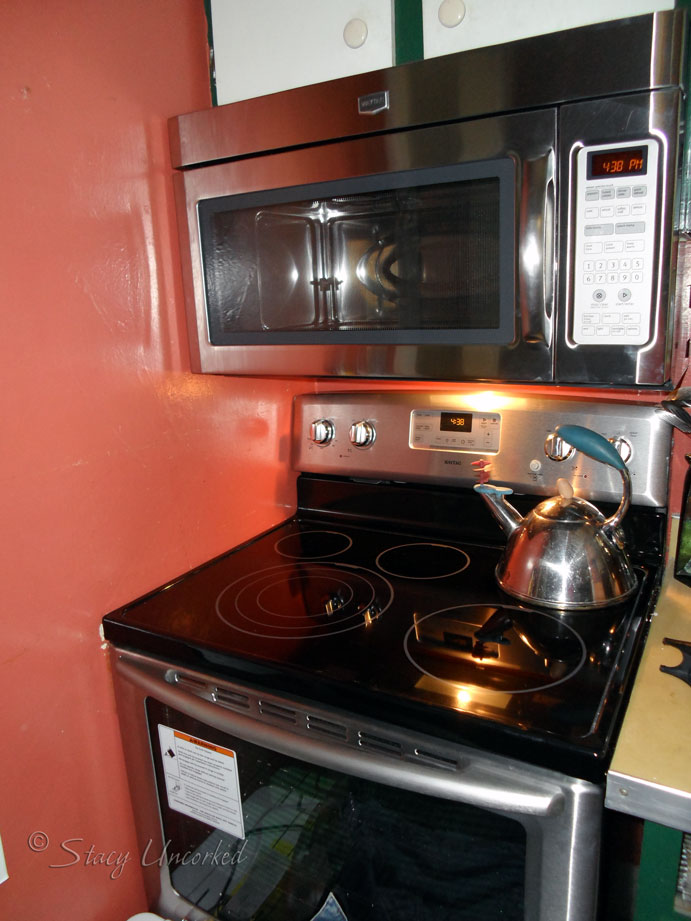 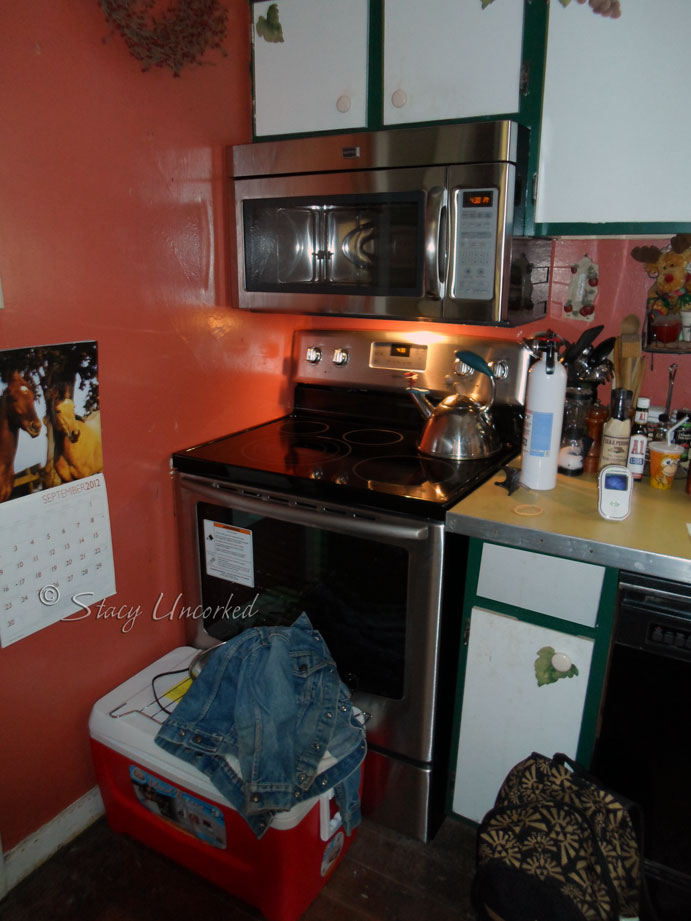 I probably should have moved the cooler and Princess Nagger’s backpack before snapping the picture, but I was in a hurry right after unloading the coolers back into the fridge and freezer.  Speaking of which: 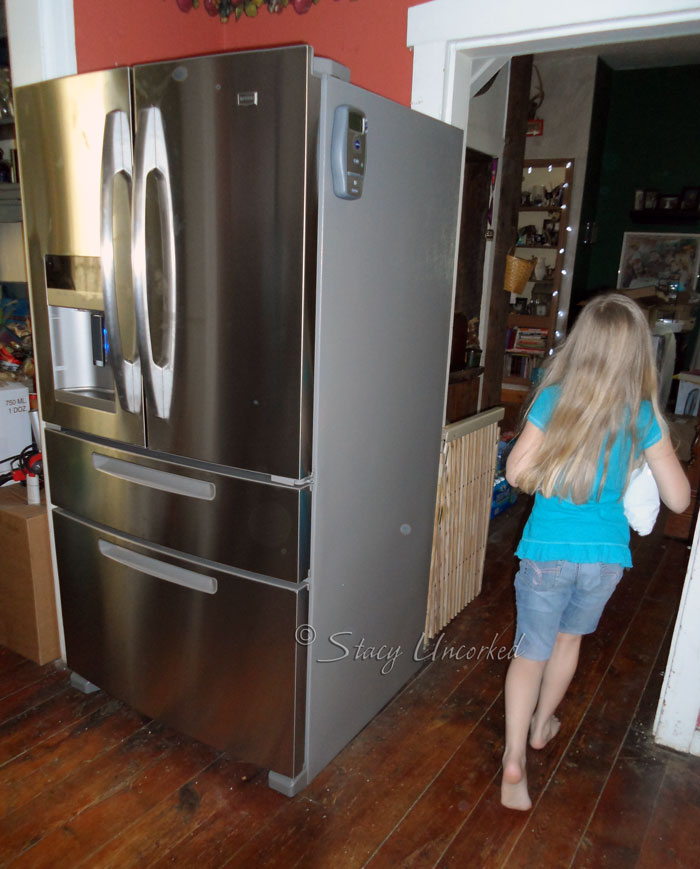 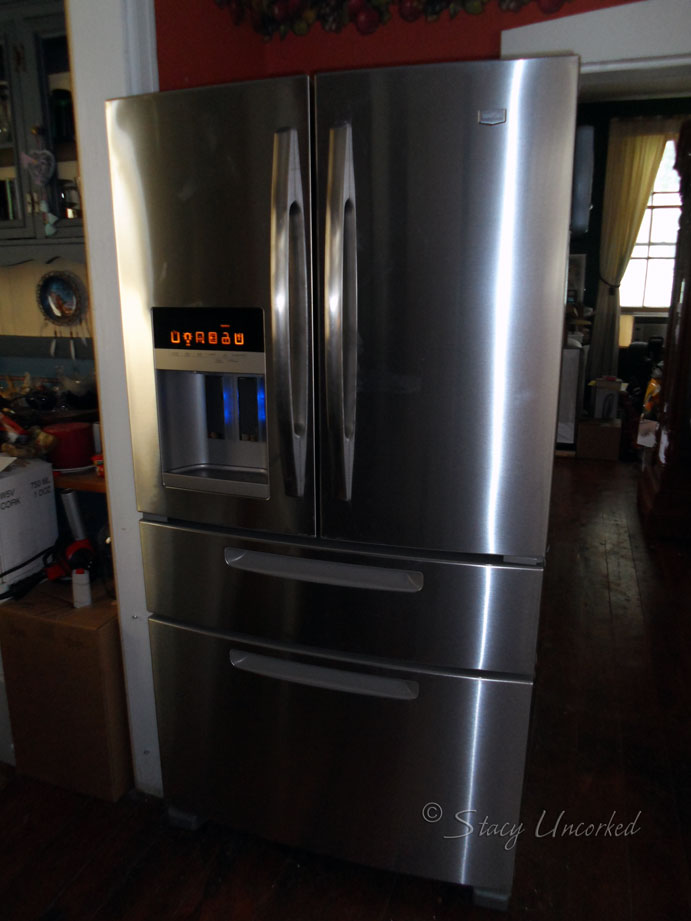 I thought it was pretty funny I got Princess Nagger’s backside as she was exiting the kitchen.  She’ll understand it’s all about being random.

The dishwasher is still waiting for installation – the dudes who came to deliver the new appliances took one look at my old dishwasher and guesstimated that it’s probably over 20 years old (I have no idea how old it really is since it came with the house when we bought it 9-1/2 years ago.  And probably explains why I pretty much have to wash the dishes before letting the dishwasher wash them) and that it probably is attached to copper pipes which he’s not authorized to work with.  So he set the new dishwasher in one end of our living room instead: 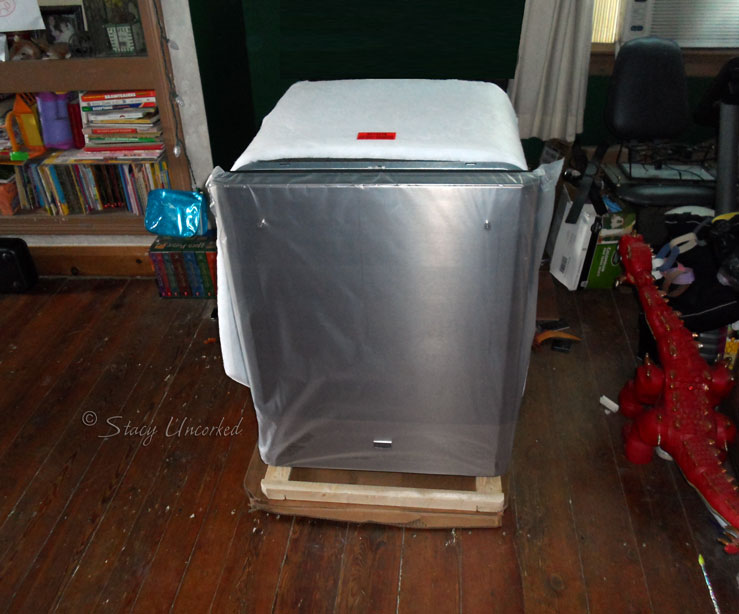 I’m just happy it’s here.  If I were confident that I wouldn’t mess something up, I’d install it myself.  But I think I’d rather let a professional tackle that job, thankyouverymuch.  I’ll be doing additional (and better) shots for the actual review of the appliances.  Suffice it to say, Maytag rocks.  Stay tuned.

Speaking of companies that rock, thank you for the suggestions and encouragement last week to contact Oster regarding that broken wine opener.  I went to their website and filled out a form for customer service, not expecting to hear back.  But I was surprised to get an email on Friday apologizing for the fact that the wine opener broke, and they’re sending me a comparable replacement one.  Solidified my faith in Oster – they obviously stand behind their products.  Suffice it to say, Oster rocks, too.

Something Princess Nagger would say doesn’t rock… Remember how I’ve mentioned in the past that she is not fond of the 8 days of swimming at her school?  Well, OK, if we’re being honest, she hates it.  It’s not the swimming she doesn’t like since she loves being in the water, it’s the whole structured thing.

She dragged her feet when it started week-before-last, but then had a transformation when she ended up with a different teacher than she’s had since Kindergarten.  Apparently the old teacher was, in her words, “mean”.  She loves the new teacher and has been looking forward to swimming.  Until yesterday.

Yesterday and today are the final two days of swimming for this school year – and apparently on these days they “make” them jump into the deep end.  When I tried to get Princess Nagger to explain why it seems so terrifying to jump into a whole five feet of water, her answer was “I’m afraid of sinking”.  That’s OK if you’re laughing right now, because I was.  And am.

I explained to her that unless she’s done something to make the mob mad at her and had her fitted for special cement shoes, she was going to be fine in the “will not sink department”.  Plus one of three adults are only two-feet away when this major traumatic event happens.  She survived yesterday, and I’m pretty confident she’s survive today, too.

Though Pessimistic Princess Nagger emphasized (with a frown and a furrowed brow) that today will be worse, since they’ll be jumping into six feet of water instead of five.  I’m guessing she’d feel better if she could be decked out like this: 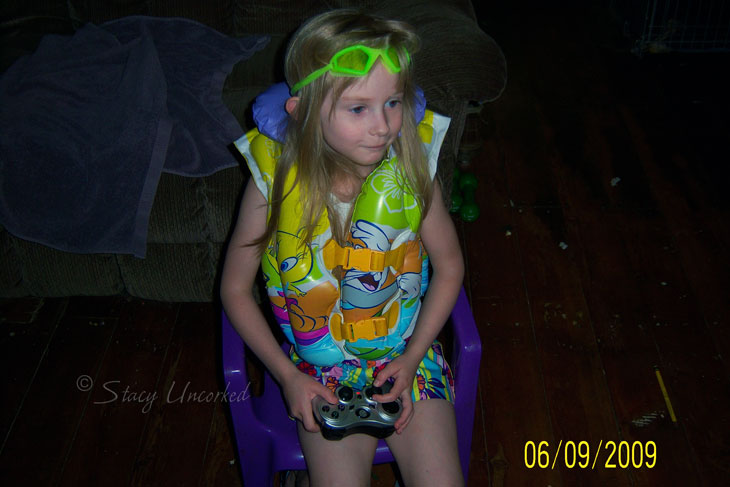 And with that, let’s call it a week – link up and join in the fun.  I’ve been such a horrible hostess the past couple of weeks, only able to get to a smattering few of you – but now that I can actually sit down at my computer and do some serious hopping, it’s time to party. Thanks for your patience, and thanks for being fellow rebels.

25 thoughts on “Crazy Christmas in September, Maytag and Oster Rock, and a Pessimistic Princess Nagger”